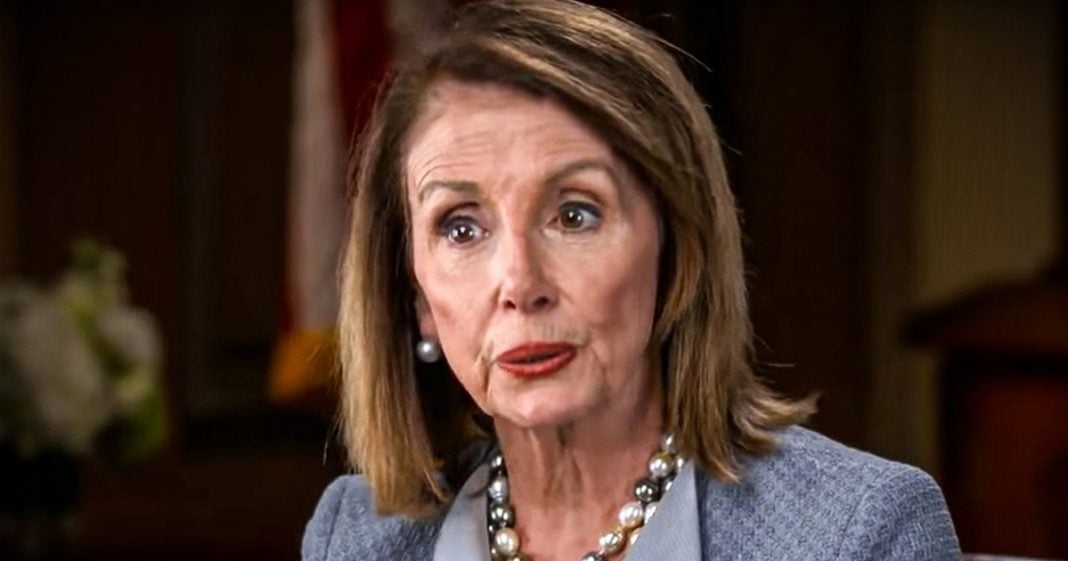 Both Houses of Congress have now passed the insulting relief package deal, which includes major tax breaks for millionaires and corporations, massive giveaways to foreign countries, and a $600 check for struggling Americans. This is an absolute slap in the face, and the fact that Nancy Pelosi is trying to put a happy face on this legislation after walking away from negotiations before the election is unforgivable. Ring of Fire’s Farron Cousins discusses this.

So yesterday, both the house and the Senate approved, they voted on and passed this new horrific insulting stimulus package slash relief deal. Um, we’re going to get a $600 check, uh, every adult, and I guess every dependent in the United States, can he get 600 bucks? Unless of course, you know, you make more than 75,000 a year, which depending on where you live in this country is a paltry amount. So yes, it means tested, which is ridiculous. So he may get less, uh, if you’re on unemployment, they did extend the extra 300 a week. So it’s going down a little bit, but you get an extra 300 a week for the next 11 weeks. And in terms of what that does for average Americans, that’s about it. Those are the two wins that average everyday working class, people got out of this massive relief package.

If you’re a foreign country, you probably got aid from it. Lots of foreign countries got over a billion dollars combined in aid. So even though this is supposed to be a relief package for the United States, we decided to use it to, Hey, you know what? Our buddy’s overseas could use half a billion dollars. Let’s send them this, Oh, let’s give this country some money to, Oh, Hey, they need something. Let’s give it to them. Hey, your own people are starving. Your own people, millions of them are out of work. Millions have lost their health insurance in the middle of a pandemic, but to hell with them, right? They don’t matter. They’re just the ones that keep voting for you no matter what you do. So sure. Nothing matters. Nancy Pelosi on the house floor yesterday came out and basically told us that we needed to be grateful for this $600 gift that she is about to bestow upon us. Here’s what Nancy Pelosi said about how kick this $600 is.

Nancy Pelosi:                       We also have in the legislation, direct payments, which were not in the Republican bill to America’s working families. I would like them to been bigger, but they are significant and they will be going out soon.

Nobody should be excited about this. Let’s not forget. The two months ago, Nancy Pelosi walked away from the negotiation table with Minutian Trump, where she could have gotten us $1,200 checks, basically the exact same stimulus that we received nine months ago. She is the one who turned that offer down. That’s on her. That is 100% on her. And I told you, I told you at the time, when she walked away from that table, I said, that is the best possible deal we could have gotten. Even though it sucked, it still sucked, but that was the best deal we could have gotten. And we will never get anything that ever approached that again. And Hey, look at this, told you, so, because we pay attention, we pay attention to what these people do. This wasn’t that hard to predict. And so this is what we get.

We get a bill that has corporate tax breaks, corporate tax breaks for those three martini lunches, uh, massive giveaways to multi-billion dollar corporations, billions of dollars going out in foreign aid, we get 600 bucks, 300 bucks extra for unemployment. We get no, um, extension on student loan forbearance. So those are coming due next month. Uh, Hey, no corporate immunity. I mean, that’s a win. It’s sad that we have to count them, not doing something good for corporations as a win, but Hey, you know, take what you can get, I guess, right? Uh, this bill is an insult. Everything about it is insulting. Everything about it is pathetic and everything about it shows how weak and ineffective the entirety of Congress is. I’m sick of it. As I’ve mentioned in the past with the exception of maybe 10, 10 combined members of the house and Senate vote, everyone else out.

And if you don’t know which 10, you know, if you can’t figure out which 10 are the good ones, then you’re clearly not paying attention, but everybody else vote them out. I don’t care who they are. Photo Mount primary them. You got two years folks. If you’re sitting here watching this, thinking to yourself, I could do a better job. Do it, do it. Don’t sit around. Don’t wait, do it, go out and start meeting people, start shaking, hands, start filling out that paperwork, start getting the signatures, start getting it done, reach out to us. We’ll do whatever we can to get you on there and get you some publicity here. We need primary challengers because what we’ve got in DC right now, doesn’t work. Not even a little bit. So get to it because if you want change in this country, apparently you’re going to have to do it yourself.