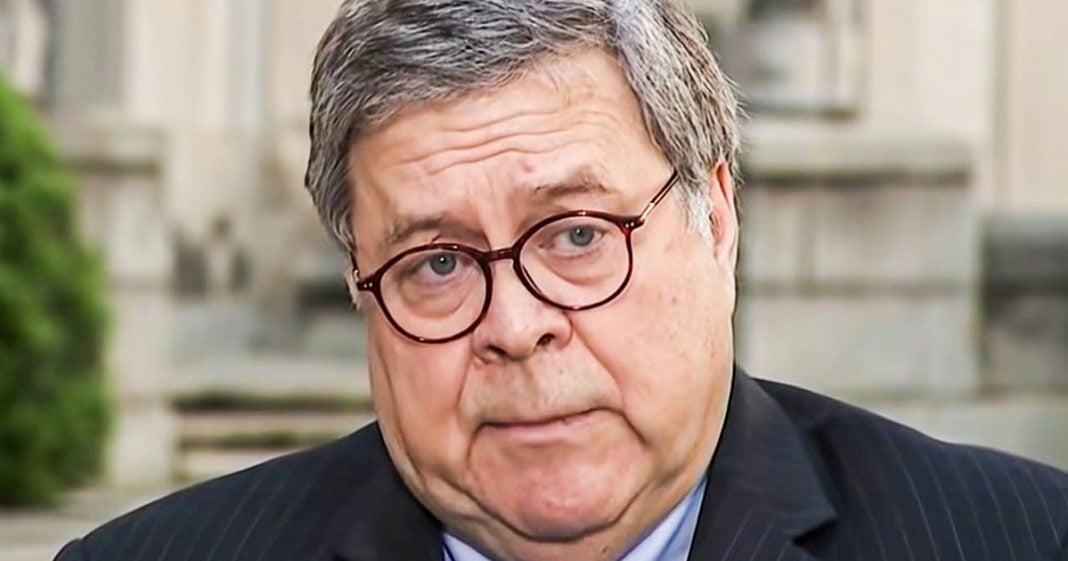 Bill Barr may only have a few days in office left, but he made a point to let the President, and the entire country, know that he won’t be pursuing or recommending the pursuit of any of the wild goose chases that Trump would like to see happen. This includes the confiscation and investigation of voting machines and anything relating to Hunter Biden. Ring of Fire’s Farron Cousins explains what this means.

Yesterday, uh, current attorney general and I guess attorney general for about 24 more hours, William Barr came out and basically shat on everything that Donald Trump wants to happen in the next month. He told us that he saw no reason whatsoever why he should appoint a special prosecutor, a special counsel to investigate Hunter Biden. Didn’t see anything there that would indicate any kind of criminal conduct on behalf of Hunter, or I guess any member of the Biden family. He also said that he saw absolutely no reason to launch an investigation and start confiscating voting machines here in the United States to look into all that fraud that Donald Trump’s swears is out there, even though there’s no evidence of it. And this of course is basically the reason bar had to resign last week. Again, his last day is tomorrow, but, uh, the reason he had to leave a little early was because he had already said publicly, there was no evidence of anything that Donald Trump was saying.

There was evidence of now remember couple weeks ago when bill BARR issued that statement from the DOJ saying that if there’s any, uh, credible evidence of voter fraud, the DOJ will investigate it. And a lot of people in the left started freaking out and thinking, Oh my God, the DOJ is getting involved. And then I reminded everybody that that’s literally part of the DOJ, his job. Like he’s not issuing a new statement. He’s saying that’s what the DOJ does. They actually have devoted to that. I took a lot of crap about that by the way, from a lot of people. So that’s why I’m pointing that out again because yeah, bill BARR ended up not doing anything cause he didn’t find anything, which is exactly what I said. What would happen? You can’t just create evidence. Nevertheless, William Barr here for probably the first time in his life is doing the right thing, the thing, and he’s doing it to camera or any narrative Donald Trump may come out with in the next month or hell even after he leaves office.

That’s what this is about. I think it also has a little bit to do with William Barr wanting to rehab his image before leaving the white house. But let’s face it here, you know, for the people who are out there saying that. And I do think there’s a little bit of truth to it, but at the same time, William Barr is very old. Sounds weird, William, bar’s not going to leave the white house and then go work in private practice, right? William, bar’s not going to go serve in another Republican administration, eight years down the road. Uh, he’s getting up there in age. He’s probably just going to retire. So I don’t know that rehabbing his image does any good. We already know what the history books are going to say about him. They’re only going to focus on what happened during the time he was in office.

So again, maybe he’s trying to rehab it so that his neighbors like them a little better. But other than that, I don’t see a purpose to him doing that. I think what he is attempting to do is maybe, maybe put the brakes on some of Donald Trump’s crazier ideas before he’s able to put them in place, get the DOJ itself on the record saying no, there’s no, there, there, or hell for all. I know maybe Sunday night, three ghosts visited bill BARR and he suddenly had a change of heart. Whatever it is, if this is the last act he does, at least he went out not further destroying the country, which given who he is and what he’s done, that was quite literally the best we could have hoped for.