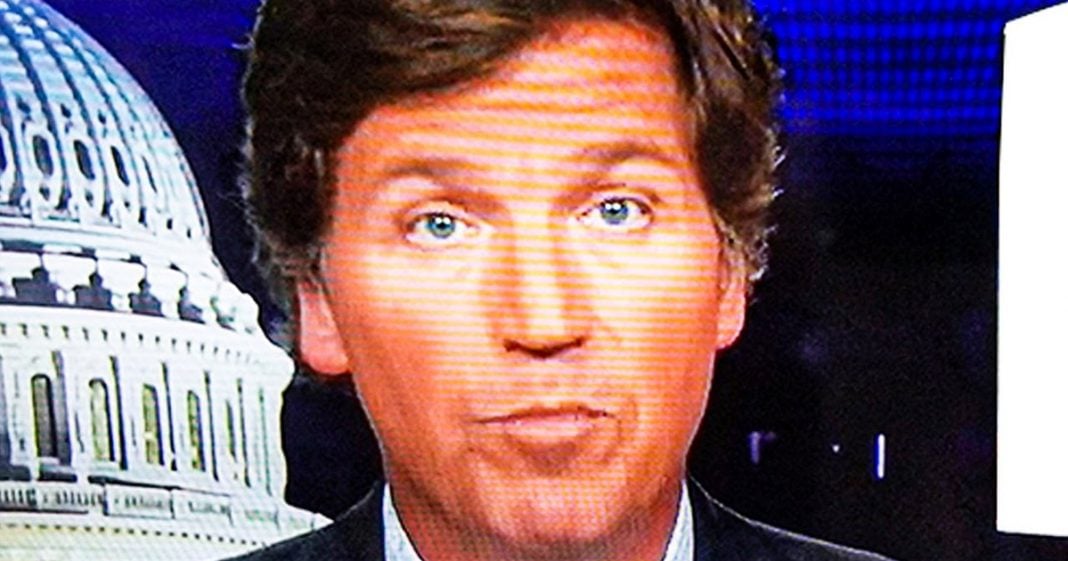 On his program last week, Tucker Carlson said that the new Covid vaccine wasn’t about curing the disease, but it was instead a means of “social control.” This is the man with the largest cable news audience, and he is now feeding them dangerous misinformation about the vaccine that could help us return to a sense of normalcy in this country. Ring of Fire’s Farron Cousins discusses this.

Late last week, Fox news host Tucker Carlson went off the deep end and apparently emerged as both anti-vaccine and pro-vaccine somehow Tucker when On a unhinged tirade. I mean, I think that’s the most polite way to say it. Um, talking about how the vaccine is, Did social control. And then he said, And we absolutely support the vaccine, but it just seems loose. Little too slick. He says, uh, this is the full, full, full statement here. Twitter is censoring. Any claim that this vaccine might be used to control populations. So whatever you do, don’t say this is social control, because if you do the richest, most powerful people in the world will act in perfect coordination to shut you down immediately. Yeah. As if you’re not a member of the top, 1%, you lying. Even if you are strongly supportive of vaccines. And we are, even if you recognize how many millions of lives have been saved over the past 50 years by vaccine, and we do it all seems a bit much. It feels false because it is It’s too slick.

I’m issuing a challenge to everybody watching this right now. What the hell is he talking about? Like, what the hell does he mean here? Like, Oh, this is social control. Vaccine saved millions of lives. This one’s going to do the same, but this one isn’t real. This one slick you’re, you’re not just talking out of both sides of your mouth. You’re multiple different personalities, all emerged in one segment to spread their own crazy conspiracy theories. And you had the one guy out there trying to spit truth, like Maxine save lives, but he gets drowned out by all the other crazy voices in your head. And again, they all tried to talk at once, apparently right there, because that was the most insane incoherent statement I have ever heard come out of Tucker Carlson’s mouth. And that is saying a lot. Isn’t it folks. Here’s the thing. Uh, he also talked about one woman in Juno, Alaska who had side effects. Sure. Plenty of people have had side effects. Why? Cause we didn’t really go through the proper testing that we usually do with vaccines, which is why they usually take about 10 years to come out. Um, would have been great if we could have, this was kind of one of those things that since Americans didn’t want to socially distance or stay in lockdown, like We get what we get.

We, We didn’t feel like waiting. We didn’t feel like doing the safe things. So now we’re going to be using these potentially, you know, who knows what the side effects will be. Vaccines. I’ll be first in line. If I could, I have no problem. I’m not worried about taking these, but the anti-vaxxers or out in for full force, they’re encouraging people to not get it. Tucker Carlson here talking out of both sides of his mouth saying, Oh, it’s a, you know, Oh, but we need it. Oh, I don’t know where I’m talking about. He’s don’t ever listen to Tucker Carlson. Like don’t take advice from Tucker Carlson about anything. Cause the guy is crazy for ratings. And I say crazy for ratings because it’s An act. Um, we Have seen perfectly rational thoughts from Tucker Carlson in the past before he got hired on as the, you know, King of right-wing media. Yeah. He used to not be this crazy. He was just an average everyday moderate Republican. And then he got paid to be insane. And by God, he’s going to go insane.

The vaccine is As safe as we’re going to get. And the risk of the vaccine is a hell of a lot better than whatever the risk of the Diseases. That’s what we do know. Sure. It would have been great if we could have gone through more testing, worked out some of the kinks and reduce some of the side effects, unfortunately again, because of the way we are as Americans, we didn’t allow that to happen. The virus grew so out of control that we had to push forward with these things as quickly as possible. And again, these vaccines, I guarantee you are so much safer than getting the disease. So take them Take advice from people who, you know, look at discredit, uh, discredited, medical papers, you know, the anti-vaxxers don’t listen to people like Tucker Carlson listened to your Doctor. They know far more than me than Tucker And anyone in the anti-vax community. So please listen to somebody with a medical degree and not any of the rest of us. I hate to tell people not to listen The may, but talk to your doctor, not get info from crazy person on cable news.