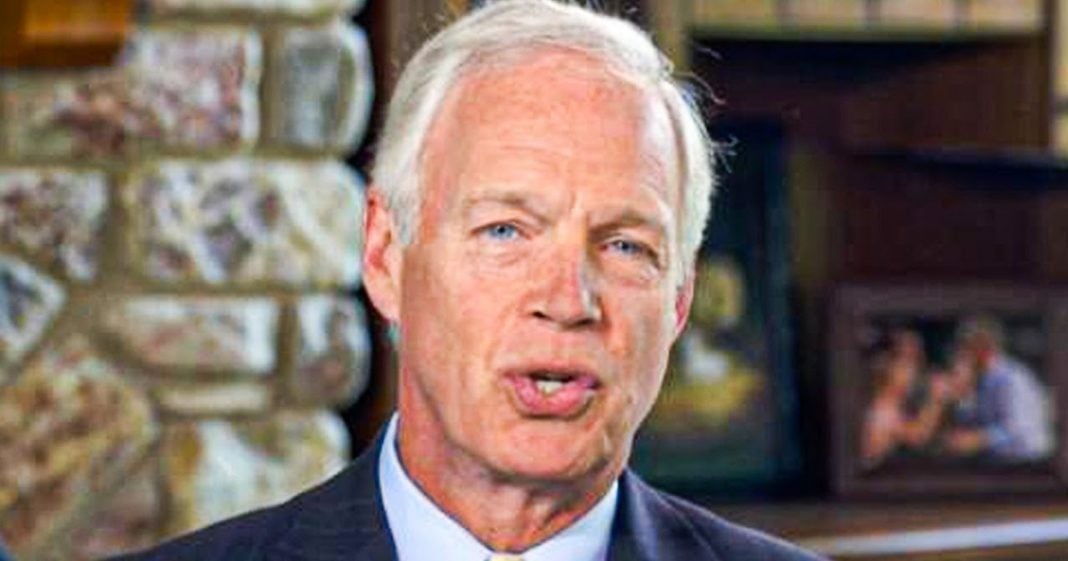 With the exception of a handful of members, the entirety of the House and Senate are painfully incompetent and corrupt, but that corruption is so much stronger on the Republican side of the aisle. Late last week, Republican Senator Ron Johnson was the one who nixed the idea of $1,200 stimulus checks for Americans, citing the growing deficit. But he had no problem giving himself a tax cut while ignoring what that did to the deficit. These millionaires, like Johnson, have nothing in common with the public and no reason to fight for us, as Ring of Fire’s Farron Cousins explains.

Well folks, Joe, Biden’s not even an office yet. And already we’re starting to see Republicans do exactly what literally everyone predicted they would do. And they’re becoming deficit Hawks. Again, we got to take care of the deficit. We can’t spend too much money because that poor little deficit that we’ve ignored and acted like it didn’t matter for four years, because guess what? It doesn’t really matter. So what happened is last Friday, Republican Senator Ron Johnson, who happens to be a multimillionaire, uh, came out in the Senate and said, listen, idiots, we’re not going to include $1,200 checks for American citizens struggling during this pandemic. Absolutely not. That is too much money for these people who have lost everything over the past nine months. We can’t afford that money because of, you know, the deficit he says now what’s interesting is that as David Serota and Andrew Perez point out in, uh, uh, Jacobin Brian Johnson had no problems voting to give himself a massive tax cut, roughly what, three years ago, the end of 2017, when Republicans shoved through that massive tax cut package, Ron Johnson was right there to say, hell yeah, gimme that tax cut because he qualifies for a large portion of it.

Because according to reports, the LLC that he owns is worth an estimated five to $25 million. And it is believed to have generated $1 million in revenue for Johnson over the past 12 months. So good for him, right? He got his, he’s not hurting. He’s doing just great. But he’s the same guy who says you can’t have 1200 bucks. You were given 1200 bucks, nine months ago. It should have lasted you. Right? Um, so we have a deal right now. It’s going to give a lot of people $600 a month. If you make more than 75,000 a year, uh, it goes down 600 per kid. Um, and that’s what you get $300 a week in unemployment, uh, benefits extended an extra 300 bucks. So that’s lower than it was. And everything goes down. They didn’t get the corporate immunity. So that’s good.

Uh, we’re screwed and we’re screwed because our politicians are intentionally screwing us over. There’s too many, Ron. Johnson’s, let’s be honest. He is not the only one out there that is like this. Most of them are, most of them are multimillionaires. Most of them are not fighting to actually give us anything. You know, Republicans snuck in there, three martini lunch tax break for that in exchange for Democrats getting a little bit more money for, for cities to help with the vaccine like Democrats, uh, the things they fought for were actually beneficial for people. Unfortunately, they didn’t go quite far enough, which is typically what Democrats do. It’s like, cool. You’re fighting for us, but you’re only fighting for us to get like this much when you should be like, you’re already coming from a position of compromise, go big. I mean, hell there’s even reports that Trump wanted to include $2,000 checks for every single American, but white house aides talked him out of it.

My God. How hard is it to just say for once in your life, God. Let’s just help people this one time. But so many of these people, most of them on the right and a lot of them on the left, they all banded together and said, you know what, them. them. That was the message coming out of Washington, DC during most of these talks, not from everybody. Sure. There’s a handful of people who weren’t saying that, but that handful got drowned out by a couple hundred. Who said, I don’t care if these people live or die, but just make sure you get that extra tax cut in there for our corporate buddy. So they can go out to lunch. Yeah. Our government hates us and there’s no other way to say that.