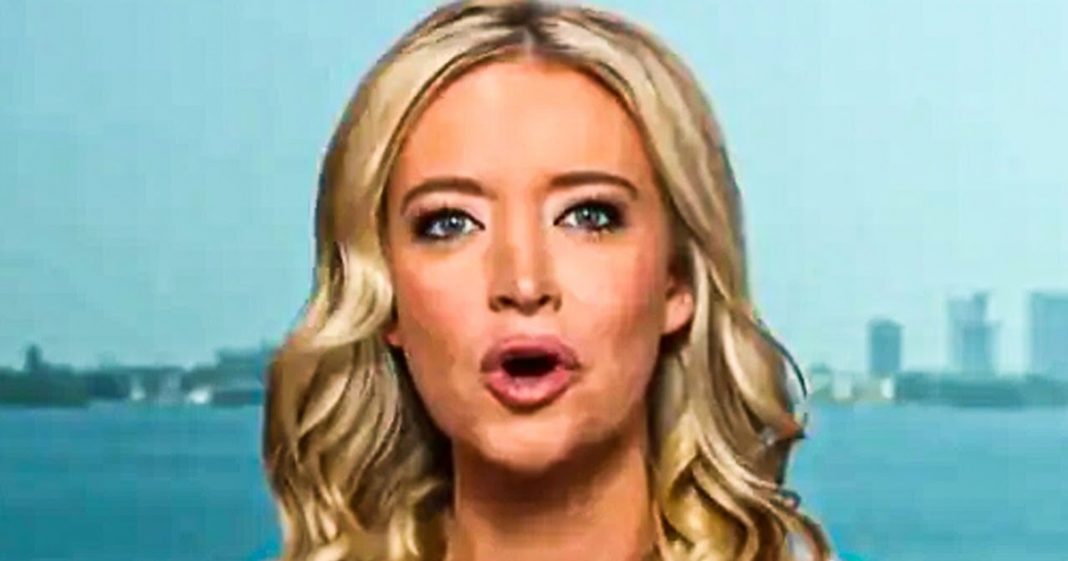 White House Press Secretary Kayleigh McEnany told Sean Hannity this week that it was entirely possible that Congress could end up ratifying an alternate slate of pro-Trump electors, and then Trump would get a second term. While the Constitution does allow for this, the window for this to happen has actually already closed, since no states are sending alternate electors. Ring of Fire’s Farron Cousins discusses the latest in this idiotic Republican grift.

For those of us that live in this wonderful place that we like to call reality. We all know that the election is over that the electors voted this week, the electoral college, Joe, Biden’s going to be the next president. And it’s all said and done Congress just have to ask to formalize it. And we’re good to go. He’ll be sworn in, in January 20th, uh, members of the Trump administration, however, still see some money to be milked out of their extremely gullible followers. And they have not relented one bit and trying to convince them that there is still a way for Donald Trump to be the next president of the United States. Here’s what it is. Kaylee McEnany went on Sean Hannity’s program on Thursday evening where she said, Sean, You know, Congress could vote To, to formalize an alternate set of electors instead of, you know, the electoral college folks who could do the alternate ones. And then next thing you know, bada Bing, bada boom, Donald Trump is president of the United States for another four years.

She may not have used all the words Just choose, but she did say that Congress could finalize a different set of electors other than the ones from the electoral college. And they could be pro-Trump electors. And then Trump would be the president. And she actually said that to Sean Hannity. She said, States could send the two sets, the real set, and then the alternate set. That’s what she said, the problem is they already didn’t do that. And I don’t think she understands that Like the thing she’s saying could happen is absolutely prescribed in the United States constitution. Yes, it is possible for a state to send both the real electors and then the alternate electors in case of a contested election. Um, but you make that decision when you vote in the electoral college and the States that are contested by the Trump folks, you know, your Pennsylvania, Georgia, Arizona, Nevada, uh, they didn’t send alternate electors. So that thing that Kaylee McEnany is saying could happen already can’t happen because the alternate electors aren’t A thing they do Do that. And Kaylee McEnany knows that that’s what drives me insane about all this Sean Hannity, I would assume knows This.

Yes, It’s in the constitution that they could do this, but they already didn’t do it. And there’s no time. Like you can’t say, Oh, well wait, wait, wait, I got to do a take back. I can’t. I need alternate electors. No, that’s not how this works. It is over Joe. Biden’s the fricking president elect. But the reason they have to keep dragging this out is because yeah, you have more and more members of Congress, including Mitch McConnell now willing to congratulate Joe Biden on his victory, acknowledging that he won. And when they do that, it makes it less that these gullible Republicans out there are going to keep sending Donald Trump money for his legal challenges that they’re actually just using to pay off their campaign debts. So Kaylee McEnany has to be a good little foot soldier and go out there and keep spreading the lie. You know, she has to do this. She has to go out there and dance for him and do the little show. It, say, look over here. We’re distracting you. That’s what her job is. Her job has never been about telling the truth or never. Her job has never been About informing Anyone of what’s actually happening on the planet. Her job is To run interference for Donald Trump. And in this particular instance, maybe get them a couple more donations. If you are a Republican watching this, I am begging you. Stop sending your money to this Charlatan. You would literally Be better off sticking it in a big hole in lighting it on fire than sending Donald Trump any more money at this point. But you do, you will just be over here laughing quietly in the corner.