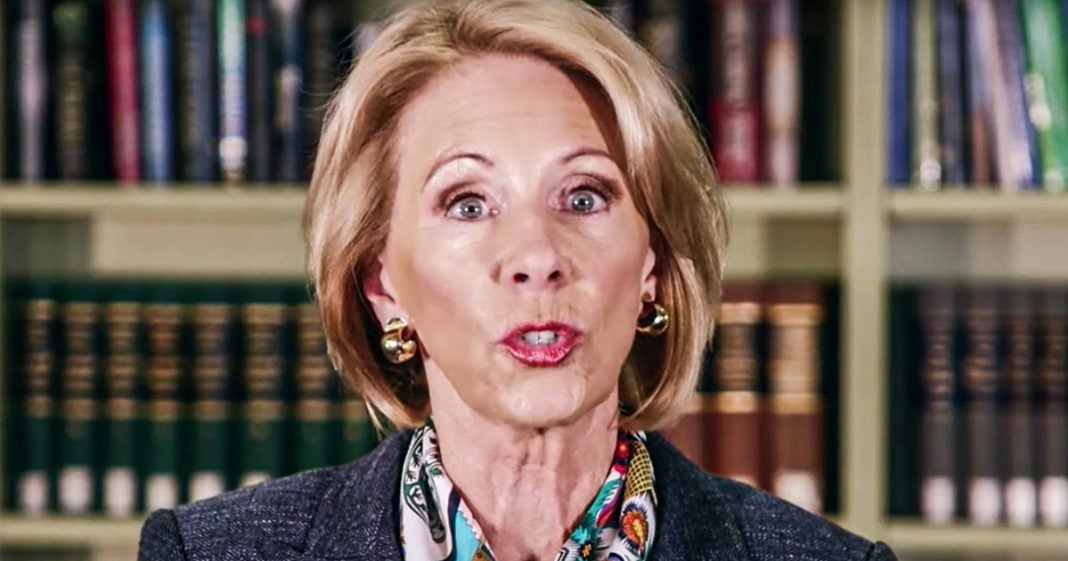 According to reports this week, outgoing Education Secretary Betsy DeVos is telling career Department of Education staffers that they need to “resist” the incoming Biden Administration’s agenda. While we still have no idea what that agenda might be, this decree from DeVos is absolutely disgusting and perfectly fitting for her time in office. Ring of Fire’s Farron Cousins discusses this.

This week, outgoing education, secretary Betsy Devoss issued guidance to the career staffers that she will be leaving behind at the education department as she leaves. And Biden’s new team comes in and here is the message she sent to them. Let me leave you with this plea resist, be the resistance against forces that will derail you from doing what’s right for students. Let me ask you this, Betsy, as you returned to your billionaire lifestyle with your, what dozen or so yachts, um, what is, what, what is exactly, uh, what exactly are they going to be resisting? Are they going to be resisting the opportunity to once again, put standards in place that benefit women over the people they accuse of raping them on college campuses? Are they going to not turn rape cases on college campuses, into a public spectacle, forcing a woman to relive that humiliation in front of a congregation of people, because that’s something you did.

You made that a rule. Are they gonna resist putting more funding towards public schools and away from charter schools of which you at least at one point had held a financial stake in Betsy Devoss folks has absolutely been one of the most evil and vital members of the Trump administration. And part of the reason for that is because she is one of the few people that has actually been there the entire time. Uh, she has not come and gone. She came and she stayed the entire administration, which really didn’t happen to many people from this administration. Um, she didn’t necessarily have any scandals. She just had bad, bad policy. And again, misogynistic policy like her campus, rape thing, uh, rape policies that she put in place. There’s absolutely no reason for those. There’s no reason for it whatsoever. Other than to overly punish women who come forward with accusations of sexual assault.

Like that made no sense why she would even do that. Other than to just publicly shame these women. That’s the kind of person Betsy DeVos’s. Other than that, yes, funneling the money to charter schools instead of public schools, public schools in this country are grossly severely underfunded. Charter schools are paid for by tuition. If you want to go there, you pay for that. They don’t get our tax dollars because if I wanted to go there, I would still have to pay. Or my kids. I obviously wouldn’t go to a charter school, but nevertheless, that’s the point, but Devoss has been horrible. And now as she’s leaving, she is telling people resist, be the resistance, be the change that you wish to see it now shut the hell up. Betsy. Nobody cares what you have to say. And honestly, this is just further proof that I do think Joe Biden is going to have to go on a firing spree.

I don’t know how many Devoss loyalists are sitting in the department of education today. I truly don’t. Um, I have to imagine there’s a couple, probably people that she put in there, but other than that, I don’t think this department is just stacked full of people who are like, yay. We’re going to destroy education. So get rid of the loyalists and move on. Replace them, not with people that are loyal to you, but with people that are loyal to education, because that’s what we keep getting away from here in the United States. Let’s cut the partisan crap out. Let’s stop rewarding our own political cronies with these cabinet appointments. And yes, I am referring to Joe Biden there too, because that’s what we’re seeing. That’s all we’re seeing is people who’ve been loyal to the DNC or loyal to Joe Biden. They’re getting rewarded with cabinet positions, whether they’re qualified for them or not.

That’s what I’m saying. Betsy Devoss was the big booger. I’m glad she’s going. And whoever Joe Biden picks to be the next education, secretary better be somebody good. It better be somebody who understands what this job entails. But given what we’ve seen from the cabinet picks so far, I don’t have a whole lot of, I hope it’s a crapshoot, right? It’s about 50, 50 some. That’s good. Some, eh, I don’t get it. So we’ll see what happens with this one. But one thing is for certain, if Betsy Devoss put those employees, there might be time to do an evaluation of them just to be safe. They’re not her secret resistors.