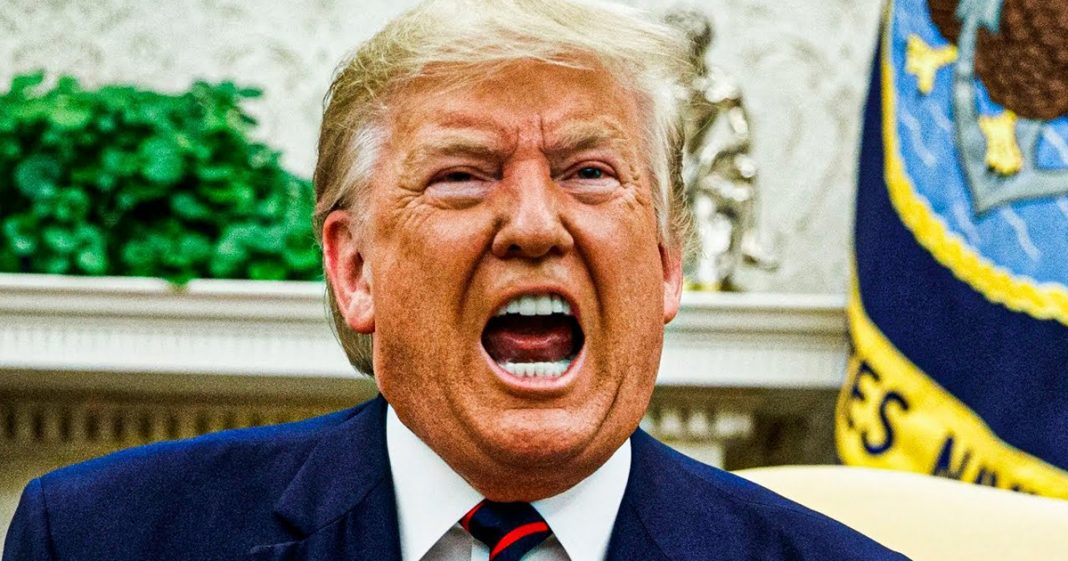 According to new reports, Donald Trump is threatening to not leave the White House on Inauguration Day, which means that Joe Biden could use the Secret Service (or the police or military) to have Trump forcibly removed from the grounds. This would be quite a sight to see, and that’s likely why these reports are overblown. Ring of Fire’s Farron Cousins discusses this.

It has long been theorized that Donald Trump would simply refuse to leave office in January. Uh, since even before the election took place, there were conversations about what if Trump doesn’t leave? What if he stays there? What’s going to happen? Oh my God. Well, now this week we’re getting even more reports saying that Donald Trump is actually planning on not leaving the white house, uh, on inauguration day, which he kind of has to, your lease is up, dude. You’re not getting renewed. The new guys moving in, you have to leave. But according to reports this week from, you know, credible news outlets, I mean, you got CNN talking about this. You get to Washington post talking about this is Trump gonna leave. Who knows? Um, what I find interesting about the whole thing is that first and foremost, he can’t stay like, there’s literally nothing that man can do to stay in the white house.

So is he gonna leave? Is he not gonna leave? Yes. He’s going to leave. The real question is, is it going to be on his own or is he going to be dragged, kicking and screaming out the front door? Uh, personally I think most of us on the left would love to see him dragged out of that white house kicking and screaming. Like that would be the perfect end to this entire administration. We so want that to happen. It’s not going to happen. That’s a bit of a pipe dream, right? Besides this theory of Trump not leaving the white house actually runs contrary to the other theories. What he’s planning to do on an inauguration day or even before inauguration. They actually, because AIDS have said, they’re worried about Trump going down tomorrow, Lago for Christmas and not coming back. So there’s one theory. According to people who work in the white house, then of course you have the other one that is on an all curation day.

He’s going to do his grand exit. He’s going to exit on Marine one, the helicopter fly to air force one, then fly air force one down to South Florida Palm beach, make a grand exit off the plane and immediately step on stage and do a rally to suck viewers away from Joe Biden’s inauguration. Okay. So if he does that, obviously he can’t be dragged, kicking and screaming out of the white house. I think what’s happening right now is that you have Donald Trump knowing that his aides are talking to the press and he is just feeding them all of this random information to keep the public guessing, to keep people talking about it. You know, the biggest news in the country right now is not Donald Trump anymore. You have failing stimulus talks that are going to end up screwing over millions of people. Joe Biden is picking his cabinet.