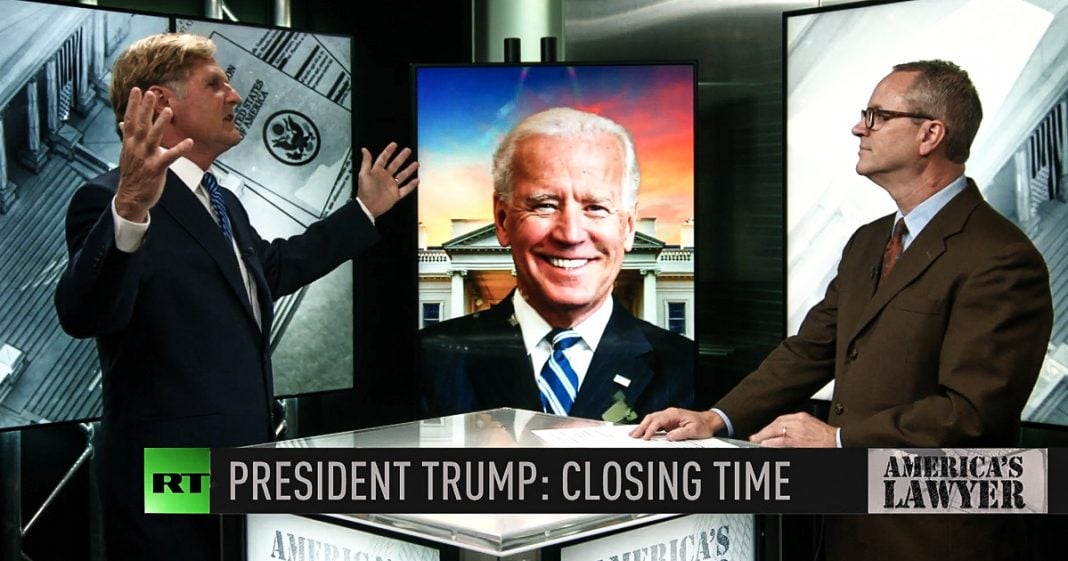 Via America’s Lawyer: The electoral college has officially voted to affirm president-elect Joe Biden’s victory in the 2020 election. Even as his Republican colleagues have come forward to congratulate Biden, president Trump still refuses to concede and insists the election was stolen. Media analyst David Lamb joins Mike Papantonio to describe the sentiment among GOP voters, and whether we are in fact witnessing the end of Trump’s barrage of election lawsuits. Plus, how exactly can Biden and his administration unify such a deeply divided electorate? And will Trump and his family remain a mainstay in the media?

Mike Papantonio:             Joe Biden is now officially the nation’s president elect as the electoral college this week certified his final tally of 306 electoral votes. But president Trump, well, he’s still holding on and he’s still holding ground refusing to concede and insisting that he was a victim of widespread voter fraud. Media analyst David Lamb always gets it right. Give me your take on it, David.

David Lamb:                         It does not appear that, regardless of, of the court, whoever says anything Trump has not given up. I think that is clear. What is kind of interesting is some of the numbers we’re getting, a poll taking, so nationally 62% of the United States believes the election is over. Okay.

Mike Papantonio:             We see it on this show all the time. We’d talk about Democrats who do wrong, and, oh my God, you would think that we have created some type of felony, right in front of a camera because of the tribalism. It’s, it’s stupidity.

Mike Papantonio:             I’d like to show you some comments sometimes from the Democrat tribe, just like the Republican tribe. So there’s so much talk of Trump posturing for 2024 run. In the media business, we’re hoping he does. It’s great material. What’s your take on it.

David Lamb:                         Well, he’s raising hundreds of millions of dollars, you know, his, his campaign and, and, and a pac that he has set up is raising a ton of money to contest the election. They’re not spending any of that yet, but they’re raising a bunch of it. A poll taken of do you want Trump to run again, nationally, no. Okay. 60% plus do not want Trump to run again, but 76% of Republicans believe that he will run in 2024. And if he does a poll taken of, so these are just Republicans, all right. Who would you vote for in 2024? Trump does the best. That’s no surprise, 52%. Pence though, surprisingly comes, he’s second with 45%, followed by Ted Cruz, Don Jr., Nikki Haley. I wonder if that is why Mike Pence is relatively quiet right now and through this process.

Mike Papantonio:             But, but look. With Pence, I’ve always wanted to put a mirror under his nose and see if there’s condensation. Because I, I don’t sometimes I wonder is the guy alive.

Mike Papantonio:             Trump is raising money for something else. He understands his fights with the media.

Mike Papantonio:             He wants to create his own media infrastructure.

Mike Papantonio:             My prediction is Donald Jr. as you know, is already out running, raising money for this.

Mike Papantonio:             Yes. Yes. Yes. And they do that by building a media empire, much like Fox. Is there anyone on the GOP side who can make a run that you feel, I mean, you say Pence is the guy?

David Lamb:                         Pence at this point is, but what happened, a lot’s going to happen between now and then. And, and as, as mercurial to be gracious as Trump is, Pence can easily get in the Trump doghouse. And what happens whenever, whenever Pence does, does not lap it up as much as Trump wants.

Mike Papantonio:             Upset. Yeah. Upsets anything Trump has to say, Trump goes crazy and tries to deconstruct him. That’s your point.

Mike Papantonio:             Don, Don, Don Jr. doesn’t have a chance in hell, okay. He’s a terrible candidate. But what he is is he’s the lead to build this new media empire. I really think that’s what you’re going to see in the next four years. He’s raising serious money.

Mike Papantonio:             Hundreds of millions of dollars already to build this media empire. And when he does it, you’re going to see that divide in America get even stronger. You know, president elect, Biden is he’s, he’s, he’s, he’s facing a very divided nation. You know, independents and not only that, they’re kind of, he’s such a ho-hum kind of president. I mean, people aren’t excited about Biden. They’ve never been excited. He’s there because he hung around long enough and people understand that. So what, what, how, what does he do to, to, to reunite the country?

David Lamb:                         It’s a challenge. As we have said, quite a bit, this whole election had, to be blunt, very little to do with Joe Biden. It was a referendum on Donald Trump and that fueled the folks who supported him, but it also fueled those who could not stand Donald Trump. And the question is, how is he handling the transition? 60% of the nation believe he’s trans, he is handling it well, but 80% of Republicans do not consider Joe Biden the legitimate president of the United States.

Mike Papantonio:             Okay. Okay. Here’s the problem the Republicans have. They say he’s not forceful enough.

Mike Papantonio:             We know these stories, but the interesting thing is, that is actually filtering out to the American public in their attitude about Joe Biden. It was part of the problem he had. He just couldn’t get anybody excited. So I think he’s got a tough job. I think it’s people around him that are gonna make the biggest difference.