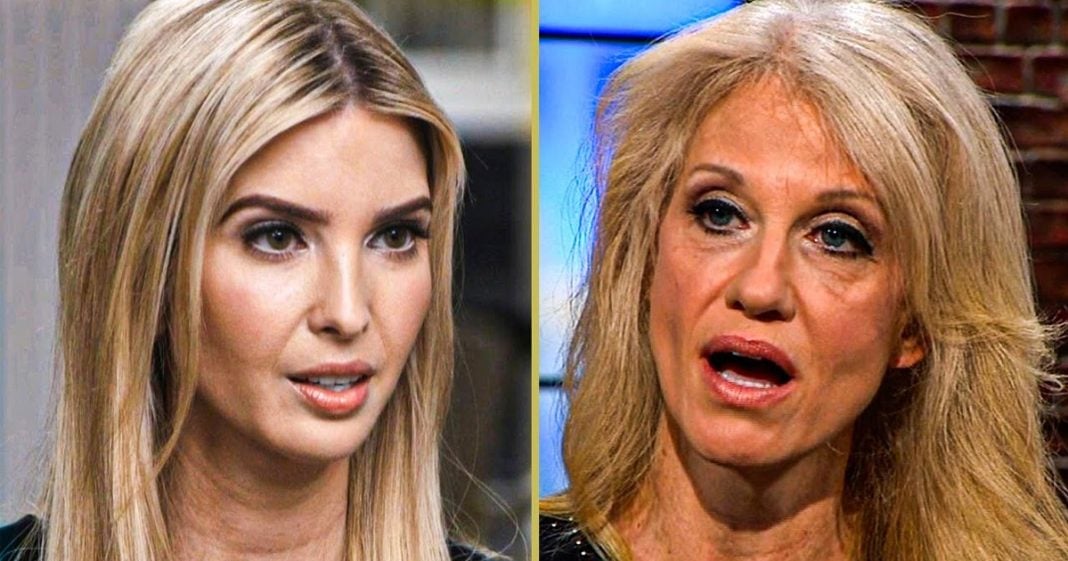 According to new reports, both Ivanka Trump and Kellyanne Conway were among the Trump staffers who routinely would interfere with the CDC’s COVID guidelines throughout the year. They would do this anytime the CDC was trying to say or do something that was perceived to be harmful to the administration, or ran counter to what the administration had been saying publicly. Ring of Fire’s Farron Cousins explains what happened and how it continues to hut the nation to this day.

Several former staffers at the centers for disease control and prevention have come out and pointed some fingers at members of the Trump administration, the individuals responsible for helping to suppress and alter the data coming out of the CDC during this pandemic. And specifically they would do this whenever the data contradicted what Donald Trump was telling the public or what the administration thought may hurt them politically, because it was an election year. Uh, two individuals stand out among the individuals name. One of them is Kellyanne Conway who left the administration back in late August. And the other one is Trump’s daughter Ivanka Trump. Now, according to these two former CDC officials Ivanka his job was to go out there and kind of massage the data saying that reopening schools was a bad idea, which as we all know, reopening schools for the most part was a bad idea.

You have seen outbreaks so bad in certain areas of the state where they have, uh, States, I guess. Um, they’ve had to reshut down the schools and immediately have to go back to an online learning apparatus. Now some areas did it better. You know, they offered, you can either choose brick and mortar. You can choose online learning. You know, some were said, no, some had said, excuse me, good grief. Uh, some had said, look, the president says school safe. Everybody has to go back to a physical building. Those are the ones that solve the most problems. And Ivanka Trump was in charge of telling the CDC, no, you cannot say this. No, you shouldn’t say that. No, this is the message the president’s going with. Let’s not release this publicly Kellyanne Conway was I think more on the political side of it, you know? No, you can’t tell them to shut down economies or that they can’t go out and eat at restaurants because that’s going to hurt things. It’s going to make the job losses go up and that’s going to hurt Trump. Politically. I want to make something absolutely clear. And this story confirms it. Cause that, that is, you know, the underlying issue read beyond the headlines here. This story is really about an administration that did as much as they could not to protect the American public, but to protect Donald Trump. Every single decision they have made has been a calculated decision based on how it is going to benefit the president of the United States, Donald Trump.

And that’s one of the reasons the United States has had the worst pain DEMEC response across the planet because other countries were actually trying to figure out how do we, how do we stop the virus? United States was figuring out how do we stop the virus from harming Trump’s re-election chances. That’s what we focused on Europe. They had their second bounce. They’re back down again. Taiwan has a population. The size of Florida didn’t even see a fraction of the numbers that we have seen here in Florida, New Zealand COVID free. There were correct ways to do this. There were smart ways to Do this. The United States Didn’t go with either of those. Cause we, we didn’t want to hurt Trump’s reelection, chances of them by God, the man still lost the election. Anyway, I don’t care if he doesn’t admit it, he still lost it. And we lost more than 300,000 American citizens along the way. That’s a death toll that is on Trump’s shoulders. That is a level of incompetence that we should never again see sitting in the white house. This entire administration has been an abject failure. And if you’re one of those people who still loves Donald Trump still thinks he’s a good president. Then guess what? I’m to go ahead and say, you’re just as guilty for those 300,000 deaths as he is.