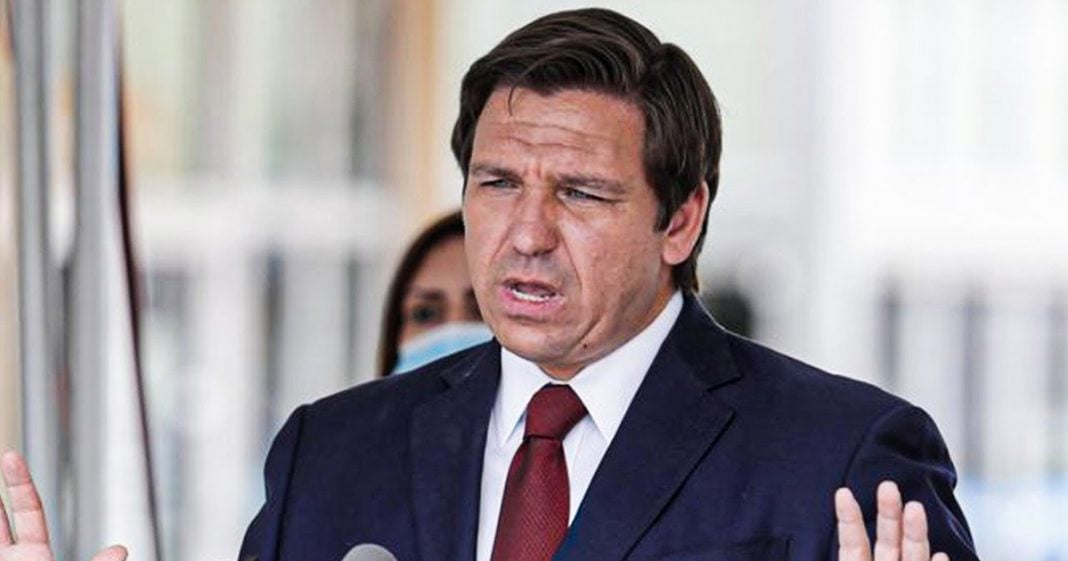 Trump-loving Florida governor Ron DeSantis is in hot water as news continues to come out regarding his actions in covering up Florida’s COVID data before the Presidential election. He did this to help Trump and state Republicans win, because they had no chance of actually winning on their merits. The state of Florida is lost, and the fact that Trump won by such a large margin is absolute proof of that. Ring of Fire’s Farron Cousins discusses this.

Recently, it was revealed that there is a gap in the COVID data for the state of Florida, uh, in the weeks heading up to the presidential election. In fact, the gap actually ends on November 3rd election day. That’s the last day where there’s this gap in reporting the real COVID numbers in the state. And it had gone on for many, many weeks prior to that, our Trump loving governor, Ron DeSantis is responsible for this. It’s fairly obvious what the man did since the very beginning of the pandemic he has wanted to, to, uh, suppress the real data. They fired the scientists, Rebecca Jones, who was in charge of the database because she wouldn’t, uh, manipulate the data or that’s what she claims. She then actually, uh, just recently had her home rated by armed agents who held her at gunpoint to take her data because is it contradicted what the state said that is, you know, Ron DeSantis is Gestapo that he is sending out there to suppress the data.

So the guy’s in hot water right now, or at least that’s what the media would want you to think that Ron DeSantis is in hot water. We’ve all seen headlines. It’s been all over the media about what DeSantis did and how we suppressed the data and how that actually led to more infections. Because people thought the situation down here was better than it actually is. But let me tell you something folks, and this, this is what the whole point of this segment is today. Rondi Santas is not going to be punished for this. There’s two reasons. First and foremost, the most obvious one, I get asked this question a lot on social media, can the Florida governor be recalled? No, we can’t. We don’t have a remedy for that in our state constitution. You cannot recall a governor in the state of Florida, nor can you recall any other, uh, elected officials at the federal level?

So we can’t recall our governor. We can’t recall our S our senators, Marco Rubio, and Rick Scott. We can’t recall any of our house members. So Matt Gates is there. We can’t do a thing about it. Yeah. They crossed all their T’s and dotted their eyes when they wrote this Florida constitution, because they knew they were going to be corrupt as hell. And that’s exactly what we’re seeing not to mention folks. You think the voters are gonna make him pay. These are voters who just absolutely broke the polls for the state of Florida to vote in huge numbers for Donald Trump. I mean, one of the largest margins of victories that the state of Florida has seen in 20 years, actually 30 years, I think it was, uh, that’s no small feat that is assigned that this state is not a blue state. It’s not a purple state.

It’s not a swing state. Florida is a red state. Florida is not a swing state. And I want people to get that thought out of it, their heads, Florida’s red. It’s gone the state of Alabama, which most people point to as an example of a solid state, they have had a Democrat as governor, more recently than the state of Florida has. So what does that tell you? The voters down here, no matter what our governor does, no matter what our governors have been accused of, they vote for them. Anyway, look at our current Senator, Rick Scott, uh, before he was elected governor of our state, his company had been accused of one of the largest cases of fraud against the federal government ever up to that point ever. The biggest one ever, he pled the fifth amendment, 75 times to avoid incriminating himself in the depositions.

And then he won his first election here as governor. Then he won reelection. Then he won a seat in the Senate. So you mean to tell me that anybody out there actually thinks that Florida voters are going to punish Rondi Santas for not reporting all the data for a couple of weeks. That’s small potatoes compared to the criminality that we have put in our state’s governor’s mansion in the past. This dude’s going to get a second term. Absolutely. We’ll get a second term. Now, does he have a career outside of politics outs or, or in politics outside of the state of Florida? Probably not. We’re a unique breed down here. We’re exceptionally stupid. And it sickens me to watch what has happened to this state over the last 20 years. This isn’t the Florida. I was born in this isn’t the Florida I grew up in it’s morphed into something. That’s absolutely disgusting. Something. I don’t want to be a part of anymore, but I can promise you. And this election sealed the deal for me, Florida. Go on. It’s horrible. What Rondi Santas has done. People have died because of what Rondi Santas has done, but you’re just as delusional as the Republicans. If you think this state will ever hold him accountable.