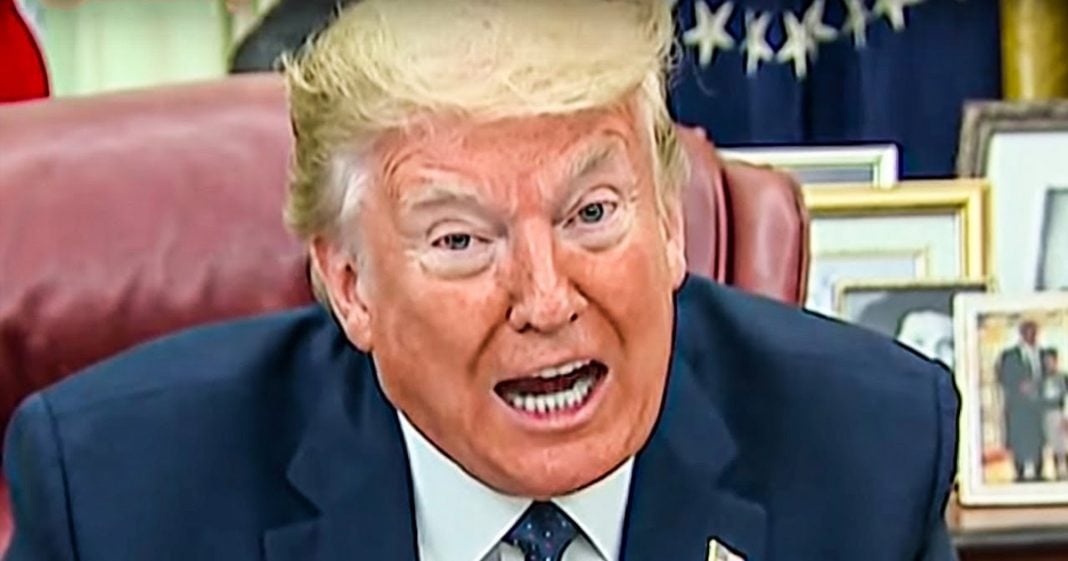 According to a new report from Axios, those closest to Trump in the White House say that the President is incredibly sad and depressed that Republicans aren’t helping him overturn the election results, but more importantly, he’s mad at Fox News and wants them to be punished for not helping him enough. Trump genuinely doesn’t understand what is happening right now, and Ring of Fire’s Farron Cousins explains why that is.

According to a new report by Axios, Donald Trump has spent the last couple of weeks depressed, depressed that Republican politicians did not step up to help him overturn the results of the presidential election, how that would make anybody depressed, right? You, you know, the rules, you know what the constitution says, you see what the people want. And then you say, dang, it, I’m sad that nobody will help me overthrow the United States of America. God, it’s gotta be depressing. But according to this Axios report, that’s not even the most important thing. The most important thing is that according to sources inside the white house that spoke to Axios, Donald Trump has vowed to make Fox news pay. Stu do not Have any reports as to whether or not Donald Trump went outside and shook his fist at the sky and said, by God, Fox news will pay for this. I would like to think that he has, but the reason he is furious at Fox news is because they, you know, back back then remember they called the election for Joe Biden, just like the other media outlets did. But Trump wanted Fox news to say, Oh no, no, no, no, no. Arizona, Nevada, no, no, no. You’re still red States. Donald Trump wins the election. Yay.

They didn’t do that. One of the few times Fox news was absolutely unwilling to lie. And so that’s why Donald Trump is furious. Now he’s still mad at them for all the other issues he’s been mad about, uh, for quite some time, that was the straw that broke the camel’s back. According to the sources in the white house, uh, Trump claims that he has gotten phone calls from top executives at Fox news, trying to, Hey, uh, you know, mend that rift between Trump and Fox, but folks is not going to happen. Donald Trump is a stubborn individual stupidly stubborn individual to think that Fox news is somehow not in your corner. That’s insane. That network is basically like 23 and a half seven pro Trump propaganda. You know, you get a couple segments a day at most. I mean, sometimes you’d go a week or so without getting one, but a couple of segments really a week, maybe that donate.

They’re not even anti-Trump, they’re just like, Hey, wait a minute. Let’s think for a second, let’s use our brains. That’s what he’s off at the network for not because they were against him, but because they said, well, well wait a minute, wait a tick. Uh, maybe we need to think a little bit thinking has always been the enemy of Donald Trump health thinking is the enemy of the Republican party. It’s becoming the enemy of the democratic party too, but it’s focused on one thing at a time here. Republicans do not like people who are capable of working things out, cause that never ends well for them. You know, they want people to just hear what they’re told and then believe it that’s, it don’t dig too deep into it. Don’t look past the curtain. You know, don’t, don’t get bothered with facts and statistics and things like that by any means, because once you do you realize, Oh wait, you’ve been lying to me this whole time.

And that’s all Fox news has tried to get people do on a very few occasions over the last year is like, wait a minute. Just think about this though. Not even saying the president’s allying. No, they don’t go that far. They could, but they don’t. Nothing’s going to mend the rift. Donald Trump has already moved on. He has Newsmax. He has one American news network. And while those networks are unlikely to last and they certainly aren’t going to make it to the level that Fox news is at. That’s where Trump is going. And if he doesn’t go there, he’ll end up gobbling up his own media outlets through Don Jr’s company. Yeah. That’s a scary one. That’s coming in case you haven’t seen that story. Donald Trump Jr. Uh, has been listed as a founding journalist in a new media company. That is actually a company that is going out with the goal to purchase this other media outlets, Fox news. He ain’t coming back. If anything, he’s going to try to create a competitor to you. So if the executives really are reaching out to Trump, please understand that relationship is over or time for everybody to move on.