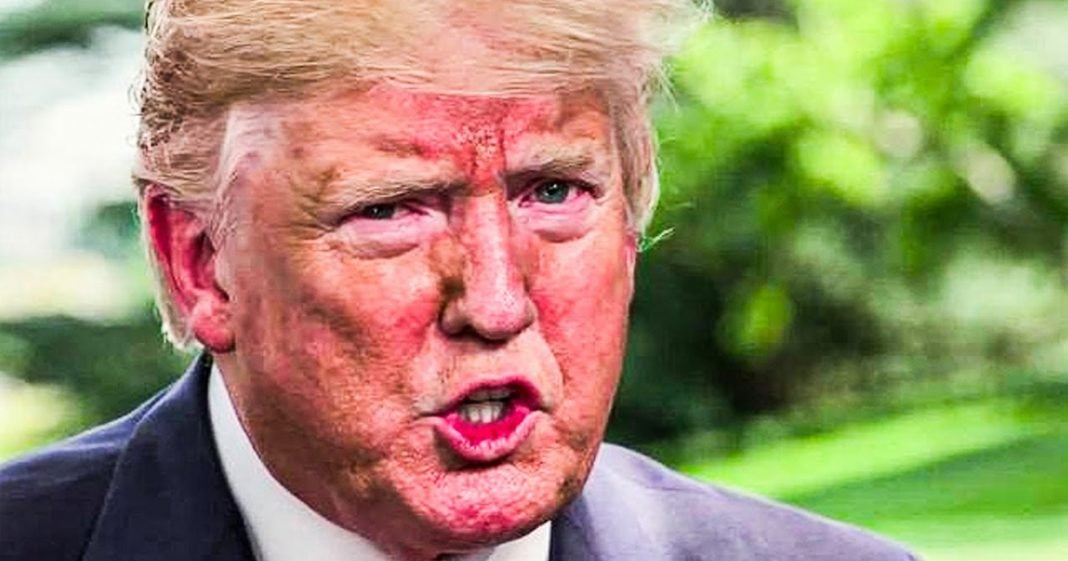 Donald Trump issued an ominous threat to Republicans in Georgia, saying that the two senators facing runoffs, Loeffler and Perdue, are going to “have a bad day” if the state doesn’t overturn their presidential election results. The electoral college has already voted, and there is nothing that the state can do at this point to overturn their results, but that won’t get in the way of a Trump tantrum. Ring of Fire’s Farron Cousins discusses this.

On Monday, the electoral college voted folks it’s over Joe Biden has said, Congress has gone to approve the electoral colleges votes. It’s done. Like literally nothing can be done. Donald Trump’s still thinks something can be done. And, uh, even after the electoral college had already voted, the president tweeted out what is being described as an ominous threat against Republicans in Georgia. If they do not overturn the election results for their state. And I got to say this tweet, he sent out absolutely reads like some kind of a Disney cartoon villain wrote it. And I’m going to try to use my best villain voice to read it.

I’m adding that for effect. Oh, what a fool governor Brian Kemp of Georgia is, could have been so easy, but now we have to do it the hard way, demand this clown call a special session and open up signature verification. Now otherwise could be a bad day for two great senators on January 5th. He’s insane. Um, let’s go ahead and get something straight, right? Because Trump has been talking about this signature verification thing for over a month now, signature verifications, where they make sure obviously that the signatures match signature on file signature on the ballot that gets sent in. So there’s no fraud. Uh, the state of Georgia already requires that they did it. It’s done it’s over. They did a recount. Biden’s still won it’s over everything. Trump is accusing the state of Georgia of not doing has actually already been done either. He’s an absolute buffoon or he thinks his supporters are that stupid either way.

Both of those statements are correct, right? Let’s be honest. They’re both correct. If you think this election was somehow stolen, you’re not a bright individual. You’re you’re, you know, you’re, you’re missing something. There is no evidence. All of these things that these Republicans say didn’t happen, they did in fact happen. There were verifications. There were investigations. There were recounts Trump’s people were allowed to go in and observe. And on top of that, he is tweeting this crap out. After the electoral college had already voted Georgia can’t overturn their own results. It is done. Dude, the States no longer have a say, how can somebody serve as the president of the United States for four years and still be this clueless about the process? The electoral college voted. That means the States are done their role in the 2020 election ended. As soon as those electors went and voted, that was it.

It now is up to Congress. That’s what happens. There is nothing he can do to overturn these results in Georgia. Because technically at this point, there’s nothing that can be overturned and it already happened. The electoral college voted. I mean, honestly, at this point, based on the rules, what’s in the constitution, even if something happened to Joe Biden, Kamala Harris would then become the next president of the United States because the electoral college has already voted. That’s how this works folks. This man is losing his mind in real time and we’re all witnesses, but he, you may be right about one thing. His constant attacks on the state of Georgia could make for a really bad day for senators, Purdue and Leffler on January 5th, after all, it was his own attacks on the post office that made a lot of Republicans not vote by mail and that likely could have cost him a couple of States. And so, yeah, his repeated attacks on the voting system in the state of Georgia, I am sure that’s going to keep some Republicans he’s at home. Oh, well.