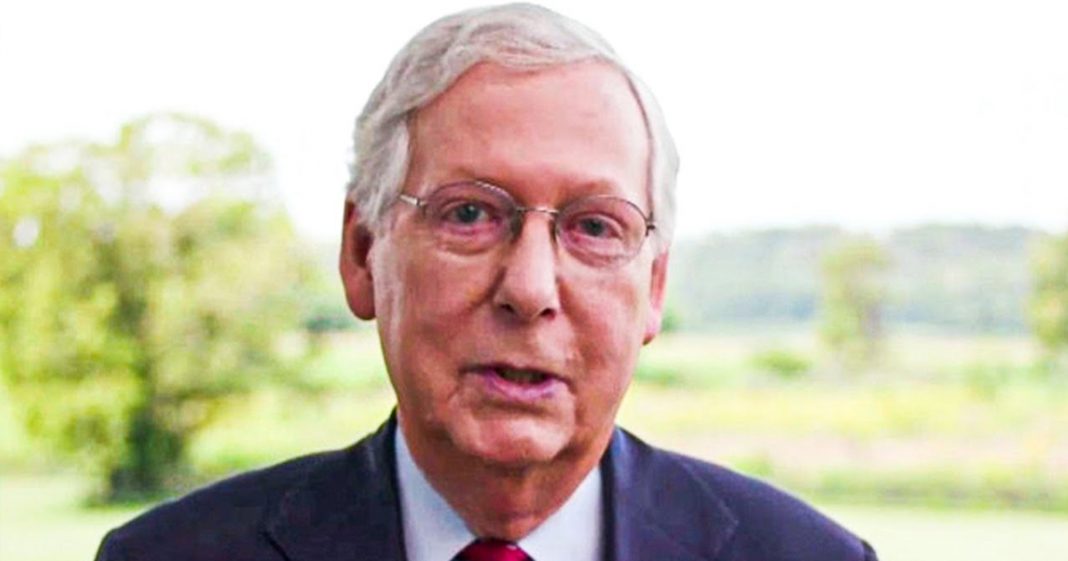 Republican Senate Majority Leader Mitch McConnell continues to sabotage any attempt to get a relief bill passed that actually helps the American people. Instead, he is insisting on corporate immunity and other corporate giveaways in the bill, and this will actually do more harm than good to the American public. But again, McConnell has no incentive to help, as Ring of Fire’s Farron Cousins explains.

Stimulus talks are still taking place in the house and Senate. And so far, it’s an absolute horror show, no direct checks for struggling Americans, which immediately on a surface makes the whole thing pointless. If you’re not going to bail out, the American public don’t even bother doing anything at this point, but nothing you do beyond that, uh, is, is worth it. So stop, walk away from the table. You’re done, but there’s a reason this is happening. Uh, right now we have compromise legislation being cobbled together. That includes immunity for corporations, retroactive immunity for corporations. So not just effective. Now it’s throughout the whole thing. If you knowingly got your employees sick, don’t worry. Nobody can Sue you. It includes other big giveaways to corporations, but it includes nothing for struggling Americans.

The reason for this is because of Mitch McConnell, Republican Senate, majority leader, Mitch McConnell continues to sabotage this legislation. Why? Because he doesn’t want it to become a reality because now that Donald, Trump’s not going to be president anymore, what are we going to have over? We’re going to have a bunch of Republicans who suddenly tell us that deficits matter that we have to control our spending, that we can’t just be Willy nilly giving out money to the, the, the federal, uh, excuse me, the population. No, no, no, no. It sucks for you, but Oh, well we’re out of money. We’ve gotta be fiscal conservatives now. Now they didn’t say that at all during the Trump years, but that’s what we’re about to start hearing. But on this particular piece of legislation, Mitch McConnell, and I have said this before, and I’m going to reiterate it.

Mitch McConnell has no reason to budge. Mitch McConnell has no reason to act like a decent human being because Mitch McConnell, isn’t going to be facing reelection for another six years. That’s it? The, the only possible thing that he may, uh, have a reason for, for giving stimulus checks to people is because the runoff election down there, Georgia. But I think what he is doing is he is holding off, giving people anything to wait and see how that election goes, because then no matter which way it goes, he doesn’t have to take action. But if he takes action and they vote on a bill before the election, that could impact it. But if people maybe it’s coming, maybe it’s not, maybe it is. Maybe it won’t be, I don’t know. They can’t vote based on that. And that’s Mitch McConnell’s play here. Delay, delay, delay, make sure I don’t do anything too rash.

Make sure I don’t do anything to, uh, you know, impetuous here. Don’t do anything too generous. Don’t do anything greedy, just wait until after that Georgia election. And then at that point, see if I can pass a bill that just has my corporate immunity giveaways in it. That is Mitch McConnell’s play. That is the long game here. And, and here’s the thing. Um, and I’ve been saying, saying this as well. Um, back in October, when we had that potential agreement between Pelosi and Minutian and Trump that did include checks for the American public Pelosi walked away from that, that was the best deal we would have gotten. It still sucked, but at least it bailed out the American public. We will never get back to that point. We will never have a piece of legislation, uh, for COVID stimulus talks, relief, excuse me. Uh, that’s going to be that good.

And again, that wasn’t even that good. It just included direct payments to American citizens. Mitch, McConnell’s not going to let this happen regardless of what happens in Georgia. He’s not going to let it happen, but he’s probably not going to let it happen until after that election. If you understand what I’m saying here, he’s got to drag it out. He’s got to make sure that, you know, nothing interferes with that election to see if he can retain his control or if he’s going to lose it. And that’s where things may happen. But at that point, if the Democrats pick up those two seats in Georgia, we are over a month away From having A COVID relief package that could possibly include stimulus checks for Americans, uh, the American public, excuse me, good grief. Um, so that’s where we’re at, but it all, every bit of it hinges on Mitch McConnell and yeah, there is blame to go around because Pelosi could have made this happen two months ago. And she didn’t because she didn’t want to give Trump a win. That’s the God’s honest truth, but ever since then, the blame is on Mitch McConnell and that’s where we need to focus. And to be honest, that ought to be a big part of those two runoff campaigns in Georgia.