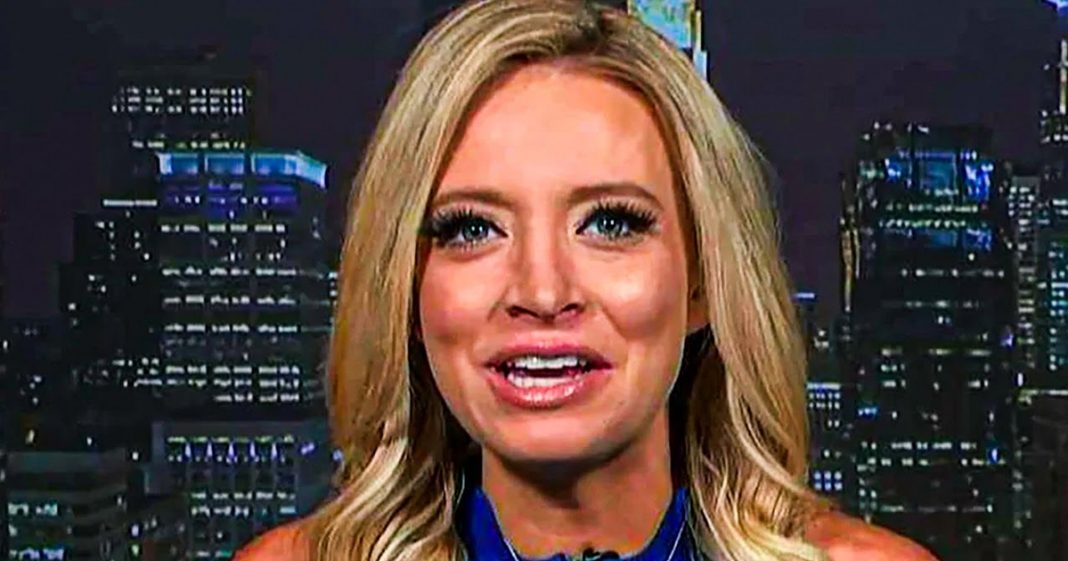 White House Press Secretary Kayleigh McEnany woke up early on Tuesday angry about Joe Biden’s Monday night victory speech, and decided to slam the President-elect as “divisive”. What did Biden do that was so divisive? He called out Trump’s attempts to overturn the election and the fact that he has stoked so much anger in the country. McEnany was promptly dragged by countless people on social media. Ring of Fire’s Farron Cousins discusses this.

The electoral college voted on Monday, Joe Biden is officially now president elect. After the electoral college voted, Joe Biden, uh, gave a victory speech where for the first time publicly, nationally, he called out Donald Trump’s divisiveness. And the fact that he insists that the election was stolen, this was good. We needed Joe Biden to do that, to finally address it as a nation. Uh, other than that, by the way, I was actually very concerned with how Joe Biden looked during that address. Uh, he did not look good. He did not look well. I’ll put it that way, but that’s a story for a different day. Here’s the thing after that speech, which was Monday afternoon, Monday evening, um, Kaylee McEnany, Donald Trump’s press secretary, apparently watched it and sat there, stewing on it for a little over 12 hours before she finally got up. Either got up the courage, or I don’t know, but Tuesday morning was just so off about what Joe Biden had said 12 hours earlier.

She finally got on Twitter and accused him of being the divisive one. Yeah. Joe Biden. The dude who’s been like totally silent. Pretty much since the election. Uh, nobody’s really heard from him. He’s not doing a whole hell of a lot, other than appointing people and having meetings, you know, the things he should be doing. Um, Kayleigh McEnany says you’re being divisive by saying we’re divisive. You’re actually divisive. Hmm. Yeah. How do you like that? Thrown back at ya? Oh, you think we’re devices. Gov divisive. Guess what you are. Oh, I know you are, but what am I, Joe? Here’s what she said on Twitter. Three year fake Russia investigation, baseless, impeachment rigging election with mass. Mail-in voting with no safeguards assault on democracy.

Yeah. Let’s forget for a minute that none of these are actually complete thoughts. I don’t think anybody looks at Kaylee McInerney expecting a complete, you know, thought out sentence. But nevertheless, nothing she is saying is true. Sure. There was an investigation. The Russia investigation that essentially went nowhere. Well, it’s still made more money than it costs us. So Hey, that’s a net. Good. Right. Government made some money off that it didn’t hinder Donald Trump’s ability to do anything though. It may have them off. It may have annoyed him, but it didn’t prevent him from constantly going golfing from going on vacations, from going on overseas trips as a, a, you know, representative of the United States, he still did all these things. He signed executive orders. He signed pieces of legislation into law. He did things. So what’s your point Kaley. And then of course you have rigging the election with mass.

Mail-in voting rigging an election by having people vote. Really that’s the Hill. You want to die on idiot folks. These people are Grifters. Kaylee McEnany is a grifter to the end. And honestly, she’s one of the worst ones at it. Like if you’re going to be a grifter, you got to be good at it. Trump’s good at it. Charlie Kirk is good at it. Kaylee McEnany you just not, you’re really not. You’re going to struggle greatly. Once you leave this administration. I know you haven’t been there for a long time, but you’re just not very good at what you do. Maybe it’s because the public was already tired and just decided to call you out constantly on your bull crap. But you’ve been the worst. The other ones could take it a little bit. Kaley McEnany can’t and she rightfully got dragged all over social media for these asinine claims that she made Donald Trump has in fact been divisive. And though I am no huge fan of Joe Biden. He has not been divisive. Hell the only people he’s divisive with are those of us on the left. Like he’s tried to shut us out. Meanwhile, embracing everybody on the other side. So when it comes to Republicans, no, no don’t you dare say Joe Biden is divisive. If anything, he is far too welcoming of people like Kaylee McInerney.