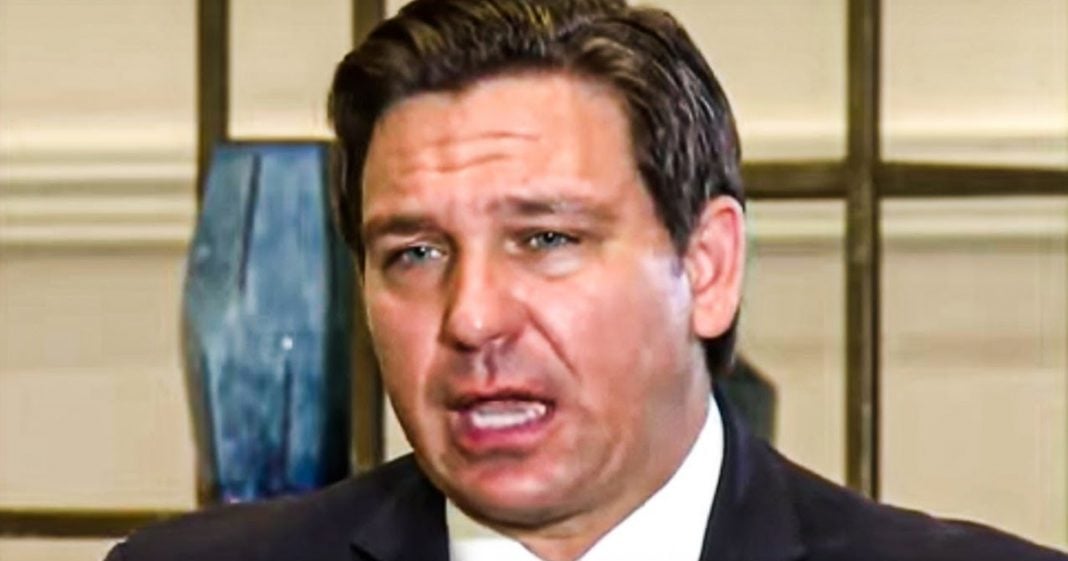 Ron DeSantis, the Trump-loving governor of Florida, has been a disaster since day one of the pandemic. His refusal to enact tough standards, and his decision to rescind the few orders that were in place after only a month back in June, has caused the state to see massive surges in virus numbers. On top of that, his decision to suppress science is leaving residents with no real clue as to how bad things are. The White House Coronavirus Task Force is now begging the governor to do something about the numbers, and Ring of Fire’s Farron Cousins explains why that might be.

The white house coronavirus task force has reached out to Florida. Governor Ron DeSantis, the Trump loving Republican leader of our state down here to tell him for the love of God, do something about the rising number of COVID cases in your state. Now, for those who haven’t been paying attention, because you don’t live down here, you don’t have relatives, whatever Florida is being weird, you don’t need to deal with them. Here’s what’s been happening in Florida since the very beginning, not only was Ron DeSantis refusing to put any statewide restrictions in place until he got word from the white house, that it was okay to do it earlier this year, he left them in place for maybe a month, never had a statewide mask mandate, uh, in, I think it was early June or late. May he rescinded the restrictions. Then later in the summer, he signs an order that says no cities or municipalities in the state of Florida can punish people for not following COVID guidelines.

Which means if a city put a mask mandate in place, you couldn’t punish people for not following the rules, essentially taking away any teeth that those regulations may have had. We also know that since the very beginning, DeSantis has been covering up the data, trying to manipulate it. Um, Rebecca Jones, the scientist who had been working on the database was fired because she refused to cover this up. We find out last week, she had her home rated by state agents, uh, trying to get their hands on any kind of, uh, evidence, I guess that may have been damning for DeSantis. And now last week, I think actually before the raid even happened, the white house itself reached out and said, you’ve got to do something. Your state is out of control here in the state of Florida. We have over 1.1 million cases, uh, since the beginning, uh, about 9,000 new cases on Saturday. So we’re right back up to where we were at the peak of this thing.

And we’re doing nothing. We are doing absolutely nothing. And it’s because of our leader. Rondi Santas. So why, why would the white house single out Florida? Right? There’s lots of States who aren’t doing anything either. And they’re seeing their numbers go up. Could it be because this is where Donald Trump wants to come retire. Once he leaves the white house, could it be the speculated Ivanka Senate run? And they’re trying to protect the state. Could it be the fact that there’s so many elderly voters here in the state of Florida and COVID is so much worse for the elderly and we don’t want them to die off because there goes your Republican base. Could it be any of those reasons? I think that likely all plays a part in it. I don’t necessarily know that the coronavirus task force, which is being run by Trump’s goons is out there trying to do anything for the betterment of the country.

I think they’re trying to protect Trump. I think they’re trying to protect DeSantis. And I think they understand that rising cases in this state, probably isn’t going to look too good for all the Republicans that are running everything here, but don’t fret Republicans. This is Florida, Florida don’t care. And I think that’s what the rest of the country needs to understand. Florida voters don’t care. We had Rick Scott as our governor for eight years, and there was very good evidence that this man’s company, well not evidence. This man’s company, his former healthcare company, uh, pulled off one of the largest fraud cases against the federal government in history. It was the biggest at the time he had to plead the fifth amendment, 75 times during depositions. So as not to incriminate himself, and even though we all knew that they voted for him anyway twice, then they voted for him to be our Senator. They keep voting for Marco Rubio, who might be the dumbest human being in the us Senate.

Yeah, I think DeSantis is going to be okay. And that sucks. Politicians never pay a price. They never have to pay a price. You wonder why nothing ever changes? It’s because nobody pays the price on the right or the left. Nobody has to answer for their horrible votes. Nobody has to answer for their horrible policies. The idiot voters just keep putting the same people in and then spending the next few years about nothing ever changing. Gee, I wonder why that is.