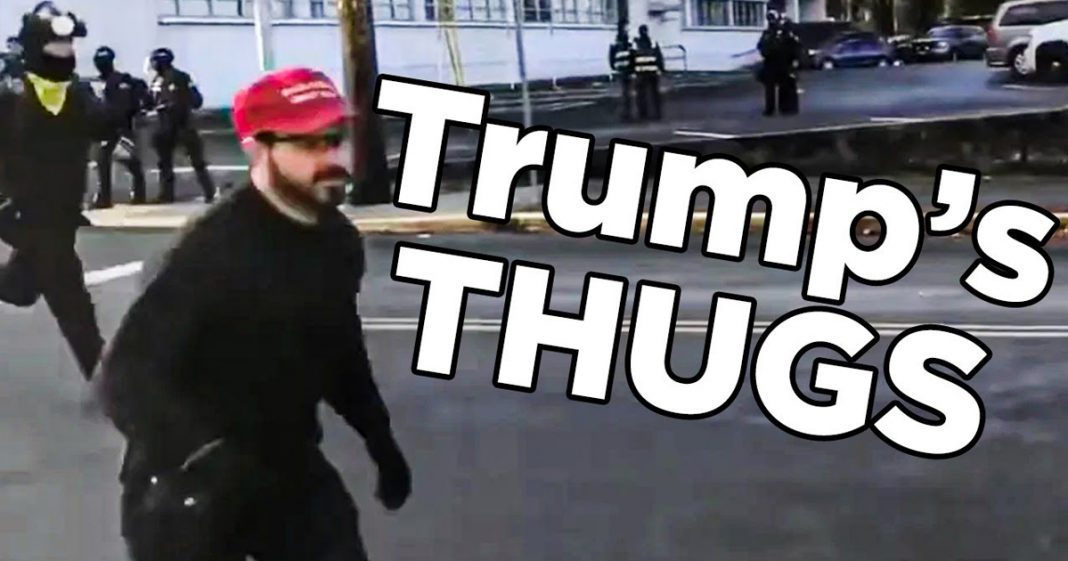 Four people were stabbed and another shot at this weekend’s “Stop the Steal” rally in D.C. Another Trump supporter shot someone in Washington. This violence is being spurred on by Trump’s rhetoric about the election being stolen, and in spite of a complete lack of evidence, his supporters believe him and think that it is their duty to “standby” and cause as much harm as possible. Ring of Fire’s Farron Cousins explains what’s happening.

Over the weekend, four different people were stabbed and one was shot as part of the pro Trump stop the steel rallies in Washington, DC, Washington state on Monday, another Trump supporter shot someone else in an act of violence over the election. This is exactly what Donald Trump wanted to happen. None of this is by accident. None of this has a stake. None of it is coincidental. This is exactly what the president has been in. Trying to invoke with all of his claims of voter fraud and a stolen election. And everybody’s out to get him and we’ve got to do something about it. This is the kind of thing that we have seen reports of possibility. This could happen for the last few weeks. And now, now that everything now that the dust is sudden was clear. Trump’s not going to be present. And again, they’re acting, this is exactly what we feared.

This was always the threat. The threat was never that Trump was going to somehow remain president by stealing the election. No, the threat was always, his supporters were going to lose their minds and commit acts of violence and folks, we are seeing it take place in America right now, right? Wing extremism is absolutely a threat to American citizens. And that’s not my opinion. That’s the opinion of law enforcement officials across the country, including those at the FBI yet all through the summer, even though these same police agencies and the FBI said right-wing extremism was a threat. What were we told by the media? Right? We media, mostly we were told that Antifa Antifa was the threat. They were going to come and show up and terrorize your streets. They told us during the election never happened. There’s a couple of places where there were plenty of acts of vandalism, but you wanna look at the deaths.

You want to look at the violence and the injuries. It’s pretty obvious which side is doing nearly all of that. So where are these right wing provocateurs? Now the ones who would show up and say, Oh my God, look how terrifying Antifa is. Oh my God, silent, dead silent about the violence that is taking place at the hands of these manga supporters across the country. And the president of the United States is sitting there, egging them on, convincing them that somehow this election was stolen from him. Nothing could be further from the truth. There is no evidence of widespread fraud, none at all, none 50 secretaries of state from States, every state, every state said, Nope, didn’t happen. Bill BARR at the DOJ said it didn’t happen. Trump says it did. Trump’s administration says it did. Rudy says it did his other crazy lawyers say it did.

And that’s good enough for these Trump supporters. That’s reason enough for them to grab arms and try to kill people because their savior, Donald Trump, their cult leader, didn’t win an election. This is the job that is going to, to require the most effort during the Biden administration, the FBI, the DOJ, they have got to do something about these home grown domestic terrorists, because that is what they are. They can not go easy on them. Just say, Oh, well, you know, both sides. There is no both sides on this crap. Look at the statistics. Look at the data. The right wing extremists are out there trying to hurt people because they’re mad about the election. This has to stop. And law enforcement has to be involved in this, but we all know whether or not they like Trump too. They have worked with some of these groups.

They’ve coordinated with them. They’ve offered protection for them. Documents prove that. So who do we turn to wish I had a better answer for that. All we know is that the violence is increasing. And as long as Trump is out there spreading these lies, it is going to continue to increase. These lies are being perpetuated the right wing media outlets like Newsmax and one America news network. They are causing this. Something has to be done. Maybe time we start suing them for these lies. Maybe it’s time. We start holding them accountable for the violence that they are inciting. Because until that happens, things are only going to get much worse.