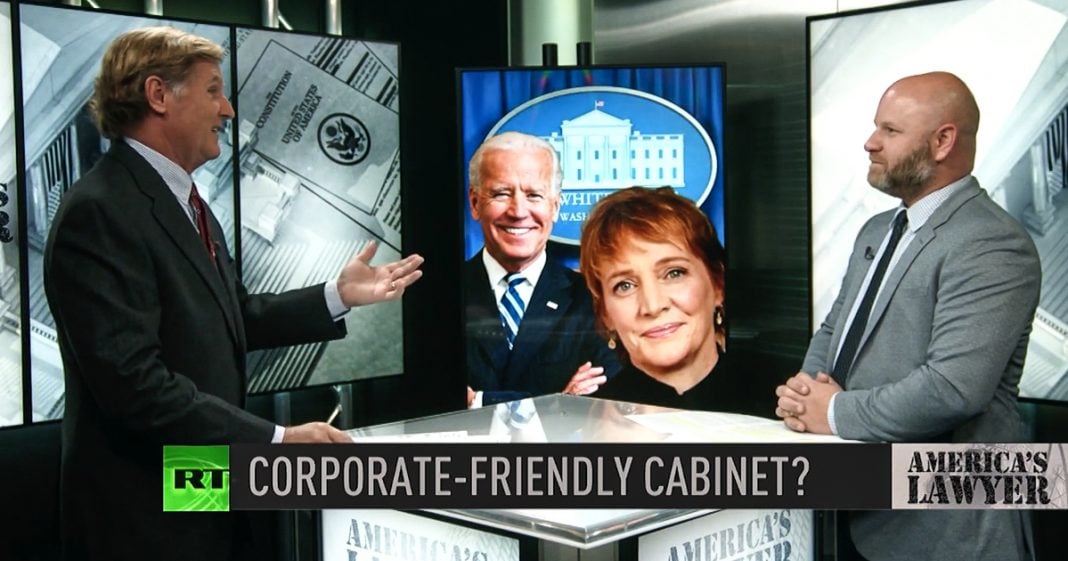 Via America’s Lawyer: While many pundits are screaming “Out with the old and in with the new” concerning Biden’s cabinet picks, the president-elect is signaling that we can expect another corporate-friendly administration, including nominee Cynthia Hogan who previously lobbied for Trump’s corporate tax cuts. Also, new reports detail how PFAS chemicals have seeped into even more everyday products than we imagined. Mike Papantonio & Farron Cousins discuss more.

Mike Papantonio:             President elect Joe Biden keeps packing the cabinet with old, old, old familiar faces, including some who have fought for corporate welfare in a big way over the years. You know, it’s, didn’t you feel like when we started this next round of shows that we’d be talking about something different than what we have to talk about right now? Cynthia Hogan, I mean, come on, Cynthia Hogan, she’s front and center advisor. Give me your, give me your take on it.

Farron Cousins:                  At this point, we’re looking at Cynthia Hogan coming into this administration. You know, she had, she’s been with Biden, by the way for decades, but she took a little bit of time off over the last few years, obviously, to go and work as a lobbyist for Apple, where she fought on behalf of the massive corporate tax cuts. She worked with the NFL as a lobbyist, helped them with their concussion scandal, the, the assault scandals in the NFL.

Mike Papantonio:             Is to go put the best face on it. No matter what the truth is, a lobbyist is a lobbyist. They are absolutely flying monkeys. And so let, let’s, let’s talk about that. She, she’s the person that advised Joe Biden to go with the three strikes legislation where we, we, we put more African-Americans in prison for, for minimal drug use. Really? It was ridiculous. Child on the corner has three strikes, they’re, they’re going to prison.

Mike Papantonio:             Okay. Not only that, this is the woman, if you’ll remember, this is before your time, but I remember it, there was a woman called, named Angela Wright that wanted to tell the story about Anita Hill. Okay. He was the guy. Do you remember the hearings?

Mike Papantonio:             If you’ve seen videos, he’s attacking Anita Hill relentlessly in favor of Clarence Thomas. She’s the one, this Hogan woman is the one who prevented, engineered the prevention of, of Angela Wright testifying. We, there’s a big, there’s a long list on this woman.

Farron Cousins:                  There really is. And the fact that he is, you know, keeping her around, even as these stories re-emerge. There is no, you know, they’re not trying to hide the fact of who she is and what she’s done and who she’s worked for. This is, you know, those are credentials for her. They’re not problems, with people like Joe Biden and the incoming administration. Just like, look, we’re looking at Tom Vilsack probably coming in with agriculture.

Mike Papantonio:             Okay. Let’s just talk about Monsanto just a little bit. Roundup, right? We got, there’s such a history. These are the people that put seeds all over the world. And so now this guy is going to be in the cabinet, advising the president on what he should do with things like Roundup, things like geo seeds, those types of things. I, you know, it just, well, let’s go back to Hogan. Okay. Hogan, a lobbyist for Apple, you talk about. But what she, what people miss, is she’s the one who helped Apple go after Chinese dissidents. Okay.

Mike Papantonio:             People, it was terrifying. I mean, these were Chinese dissidents who were saying, we, you know, we got a right to be out here in the streets. She’s the one that helped Apple out those people. And she defended that.

Farron Cousins:                  Yeah. And that’s, that’s what we could expect from this administration. More people like Hogan, more Vilsacks, more Austins, all of these people. And it’s exactly, by the way, what we had expected.

Farron Cousins:                  We had pretty much, you know, all of us had called this is what’s going to happen because, okay, at least it’s not horrible on Twitter like Trump. And some of these people, a few of them, not any of the ones that we’ve talked about could end up being better, you know, I, I hesitantly say that. But in terms of, are we looking at change over the next four years?

Mike Papantonio:             And you know what, every time we do a show, you’re going to have the tribal political lizards come out. Oh, give him a chance, you just want to. No, look, they know where we come from. We’re extremely progressive. We’re AOC progressive. This is not, we knew this was coming. And so, so what are you going to do? You got to, we got to talk about it.

Mike Papantonio:             And yes, we are going to talk about it. And if we offend you, go to another damn channel, how about that? When I look at how Google is handling PFAS, let, let me just, let me talk about this just a minute. PFAS is a product, it’s a chemical that causes cancer. It causes all types of, all types of illnesses in human beings. What we have here now is rather than getting any help from social media, from the big companies, they’re actually, it actually looks like they’re working for companies like 3M and the companies who produce. I mean, if you go do a search, they put the best foot forward. What is your take on PFAS?

Farron Cousins:                  What we’re learning about now, and you and I’ve talked about PFAS for years, obviously, it gets more terrifying every time there’s a new story coming out. And Sharon Lerner with the Intercept, who’s been a great friend of us, has come out with another one here, talking about all the latest reports. Most of them coming out of Europe, because they’re less hindered by the corporate influence that as we are. PFAS is in dang near everything, I think is the best way to say that. You know, if it’s hand sanitizer, you’re getting a dose of PFAS. If it’s cosmetics, you got a dose of PFAS. Your carpet, your car, your motor oil, all of it is now containing PFAS. This forever toxic chemical is everywhere now. You can’t avoid it.

Mike Papantonio:             If you want to know how bad this is and I’m not just saying this because I’m in the documentary. I tried the first PFAS cases, the first C8 cases ever tried in America, tried four of them. And that’s the first time that we figured out that it’s killing people. In the Ohio River Valley, they contaminated the water of 70,000 people who were drinking the damn stuff. Their children were drinking it. It was in swimming pools. They showered with it. They drank it every day. Cancer clusters were all up and down the Ohio River Valley. Okay. You remember I tried those cases.

Mike Papantonio:             They made a movie about it, it’s called “The Devil We Know.” If you really want to understand this, and I know you’ve seen this, we’ve talked about, it’s, it’s the best handling of, of, of, of this case I’ve ever seen. It’s called “The Devil We Know,” it’s on Netflix and it tells you how dangerous. This stuff’s in popcorn bags, pizza boxes, carpets, fry pans, dental floss, fabrics, cosmetics, and the companies knew how dangerous it was. And they were dumping it into the Ohio river. And it was ending up in people’s drinking water. So now, here’s what’s really interesting McCabe. Talk about Mike McCabe, his connection to this. He’s the guy who’s leading the charge on who’s going to end up with EPA. You did a story on it.

Farron Cousins:                  Yeah. That’s what’s so disappointing here, is yet another, as we’ve already talked about so many, you got McCabe who worked on DuPont’s behalf. You know, understood the dangers here, tried to whitewash it like so many others. And now here he is in the Biden administration, potentially running the entire environmental agency. This is a horror story is what we’re looking at now. This is a true to life horror story, because this stuff is killing people. This stuff is destroying the bodies of human beings. And we still, I know we know a lot of what’s happening. We don’t even know the extent of it yet. We don’t know what this stuff could do in another 20 or 30 years. And Biden’s right here talking, being friends with and taking advice, from one of the guys who was involved in this.

Mike Papantonio:             Worse than that, Biden is saying to McCabe, hey, why don’t you appoint the people to the EPA that are going to oversee this? This is the biggest environmental catastrophe in America right now. And when I was trying cases up in the Ohio River Valley, we tried cancer, testicular cancer, kidney cancer. We saw birth defects. We saw all of this happening. And now you have Michael McCabe who was there lobbying for these companies saying I’m going to be the guy who makes appointments to the EPA. And we’re going to see this go on because the EPA is not going to do anything about it. It is so tragic. And we started this election, again, truth be told, you and I are way left progressive.

Mike Papantonio:             There’s no question. So I am not going to allow this to happen through this administration without talking about it.

Mike Papantonio:             If they don’t, if they don’t like it, good advice, change the damn channel. Okay. Farron Cousins, thank you for joining me.