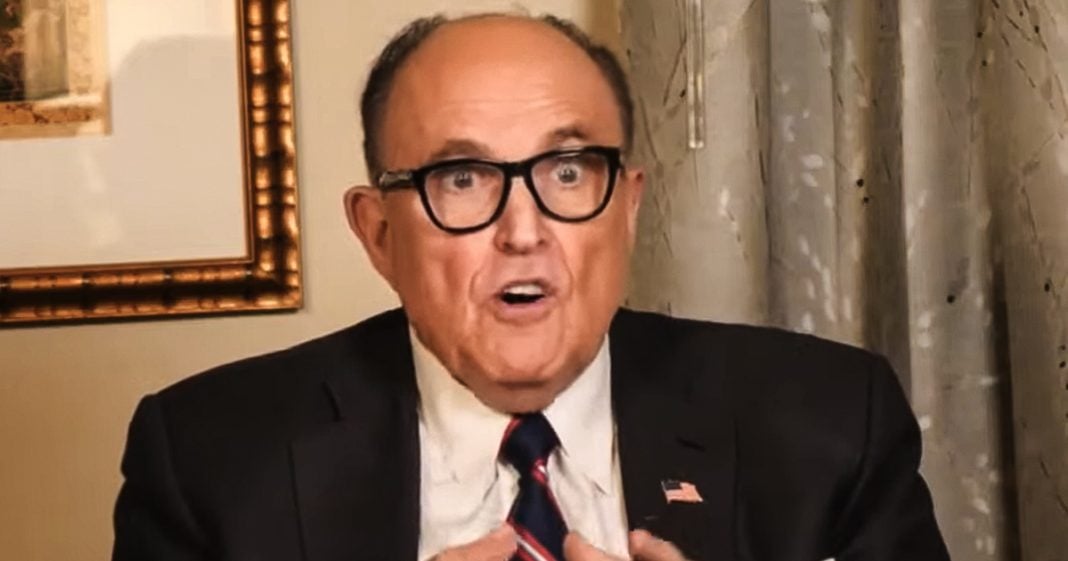 The Supreme Court ruled unanimously to NOT hear an election challenge filed by embattled Texas Attorney General Ken Paxton, a move that came as a surprise to the MAGA crowd. But Trump’s lead attorney, Rudy Giuliani, swears that the fight is not over, even though there is literally no legal option left for Trump. Ring of Fire’s Farron Cousins explains what is happening and why it is 100% over for Trump.

So even though the Supreme court decided unanimously last Friday to not hear this ridiculous lawsuit from Texas attorney general, Ken Paxton, and even though the legal team for Donald Trump has lost more than 50 individual cases up to this point. And even though the electoral college is voting today, sealing the deal for a Joe Biden victory in 2020, Rudy Giuliani has vowed folks. This fight ain’t over, even though literally every institution in this country says it’s over, there’s literally nothing else you can do. Rudy. Rudy has picked himself up dust himself off and said, Nope, I’m going to keep fighting. And nobody’s asking, well, what the hell are you fighting against dude? There’s nothing. There’s nothing left. It is over. You’re the last one here. So what are you doing? Bod here is the statement that Rudy Giuliani released over the weekend. He said the case wasn’t rejected on the merits.

The case was rejected on standing. So the answer to that is to bring the case now to the district court, by the president, by, by some of the electors alleging some of the same facts where there would be standing there, there’s nothing that prevents us from filing these cases immediately in the district court, in which the president of course would have standing. Some of the electors would have standing in that their constitutional rights have been violated. Now it’s interesting. He points that out because that is something I pointed out when this case was first announced. The state of Texas has no standing to Sue the state of Georgia by the same token. Neither does the president of the United States though. Neither do those electors, how the States conduct their elections is up to the individual States as granted to them by the constitution. So Rudy, it doesn’t matter which court you file this in.

It doesn’t matter who your new plaintiff is going to be. You still won’t have standing because they’re legally allowed to do the things that they did. Furthermore, the electoral college is voting today. So there’s literally nothing you can do once that electoral college votes it’s over. It is over. So I don’t get it. Is he actually getting paid the $20,000 a day that reports said he had wanted? I don’t know if he is, then I can see why he would still want to keep fighting. Look, if I was getting 20 grand a day for doing anything, I’m going to do whatever I can to keep doing the thing as long as it’s legal. Uh, so maybe that’s his motivation at this point. Like I like getting thousands and thousands and thousands of dollars a day. Maybe he’s got some weird kink where he enjoys being nationally, humiliated every day. Um, some people are into that. The humiliation thing, maybe that’s what Giuliani is doing. I don’t know if that’s your thing. Okay? Sure. Uh, or maybe, maybe this guy just needs to be disbarred because he doesn’t understand how the law in the United States works. We’re either looking at somebody who’s got some weird fetish for being publicly humiliated or a senile old coot who doesn’t know the law anymore. Willing to bet. In this case, it’s probably the latter.