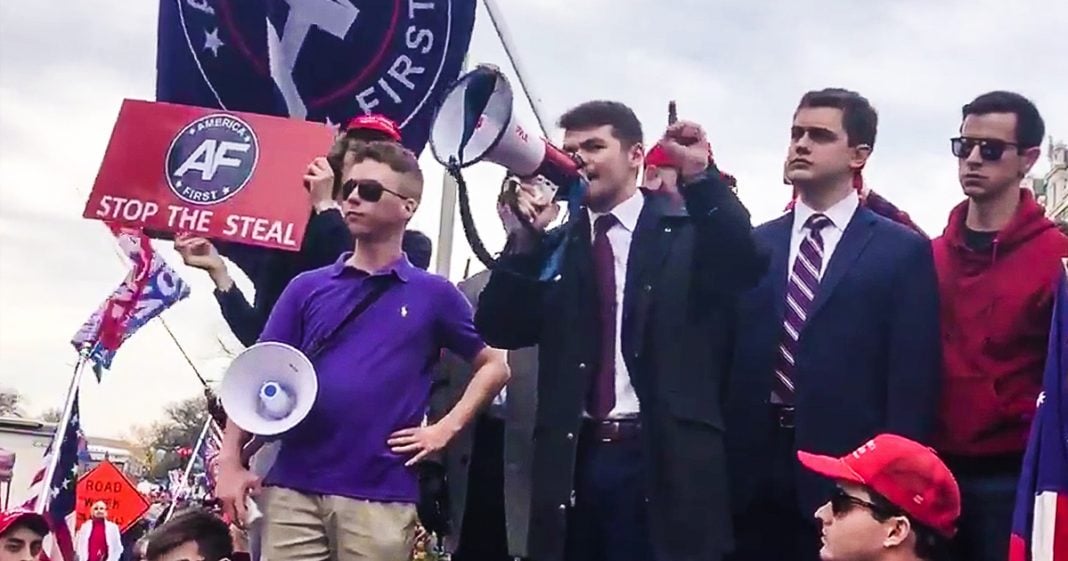 Trump supporters showed up in Washington, D.C. this weekend to demand that the Republican Party make Trump president for another 4 years, or else they are going to destroy the GOP. These braindead Trump supporters are worried that their grift might be coming to an end, and they are willing to let the country be destroyed in order to preserve their profits. Ring of Fire’s Farron Cousins discusses this.

Over the weekend, a very large group of crazed Trump supporters showed up in Washington, DC to protest, I guess, uh, the Supreme court ruling, uh, that ruling was that they weren’t going to listen to the case from Texas. Hey gee, Ken Paxton, maybe they were protesting the entire Republican party for not being able to properly rig an election. I don’t know exactly what they were doing, but one thing is for sure, they were all there to show that they are pledging their undying loyalty to Donald J. Trump, and they will take down any institution that stands in the way of Donald Trump serving another four years in office. Take a look at what happened during that little rally. Here’s a clip.

Nick Fuentes:                       In the first million MAGA march, we promised that if the GOP would not do everything in their power to keep Trump in office, then we would destroyed the GOP.

So that’s, that’s what it destroy the GOP, destroy the GOP, stop the steal and destroy the GOP. I’m all for it, right? I mean, listen, what’s happening right now with the Republican party is absolutely what the Republican party deserves. You created this Frankenstein’s monster. It went on this rampage and now suddenly the villagers are saying, we’re going to hold you accountable for this. Not because they’re mad about the monster, but because somehow they fell in love with the monster. Like this is some perverted version of Frankenstein that nobody ever thought was possible. The monster goes on the rampage. And then the public’s like, I like it. I liked the way he’s doing that. I could, I could, I could get used to that. I could see four more years of this. And that’s what these crazy people are doing at this stop. The steel rally. And I’m sorry, but these aren’t normal people. They don’t have fully functioning brains. They can’t, they can’t. These are members of a cult. Uh, and by the way, the guy speaking in that video, a guy named Nick Fontez, uh, according to a report from here, it’s the dude is a known white nationalist. And those are the people who are furious that Donald Trump’s not going to be president anymore. So, you know, what, if y’all want to destroy the GOP have had it far be it for me to stop you from living your dream and getting rid of the Republican party. Sure.

But I don’t think you’re going to be that successful. I think as time goes on, this is going to die down. Uh, this is going to end up being a little bit kind of like the tea party. Those folks were just as deranged to an extent. Um, and that’s how we’re going to look back on these groups and, you know, five to 10 years from now as just as fringe extreme, then they all just suddenly one day disappeared. It’s kind of what happened to the tea party. Then I have little reason to think that it won’t happen to these people as well. One of today’s video sponsors is surf shark VPN. And right now they have an exclusive offer for a ring of fire. Viewers go to surf shark.deals/ring of fire. And you can get 84% off a two year plan with four months for free. If you’re not using a VPN to surf the web, then your data is at a greater risk than it should be using a VPN can help protect your data. It can help protect your privacy. And it can actually give you access to lots of features. The internet has to offer that you may be missing out on using a regular web browser. For example, there’s plenty of areas in the world where certain, uh, streaming services are not available using a VPN can allow you to get around that. Um, there could be certain content restrictions on a college internet service. This can allow you to access more information. There’s all kinds of things that VPNs can do, but the most important thing is that it helps protect your privacy, giving you a little bit more internet security. So again, go to surf shark.deals/ring of fire. Use code, ring of fire at checkout, or simply click on the link at the top of the video description below to get 84% off a two year plan with surf shark, and you get four months for free.