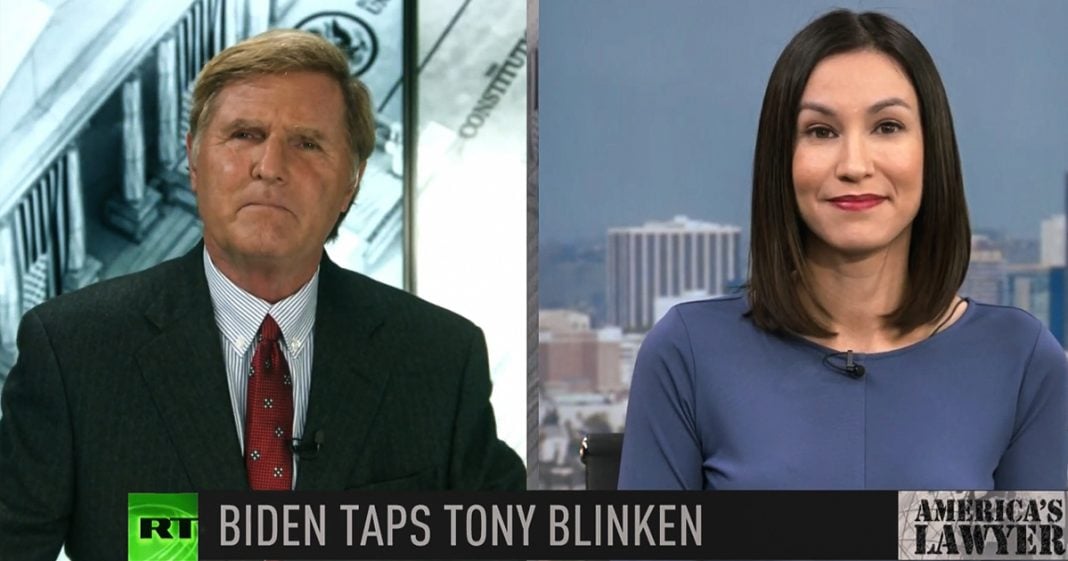 Via America’s Lawyer: RT Correspondent Brigida Santos joins Mike Papantonio to discuss what Biden’s latest nomination of Antony Blinken to Secretary of State means for U.S. foreign policy. Well-known for his hawkish stance supporting the Iraq War, many are skeptical that the president-elect’s administration will embrace troop withdrawals in the years to come.

Mike Papantonio:             President elect Joe Biden has nominated Tony Blinken for secretary of state. Much of the media is chanting out with the old and in with the new when it comes to Biden’s cabinet picks. But how much of a difference we’re going to see? Almost none. I have Brigida Santos to talk to me about this war hawk, this awful war hawk who helped get us involved in Iraq. Brigida, for those who don’t know who this character is, let’s talk about him because most people aren’t even paying attention to him. He is a flying monkey war hawk, any other way to describe him?

Brigida Santos:                   Absolutely, that’s accurate. Now, Anthony Blinken has worked with president elect Joe Biden for two decades. He previously served under president Barack Obama and then vice president Joe Biden as the deputy secretary of state and deputy national security advisor. He played a key role in the Obama/Biden foreign policy team. So it’s really no surprise that the president elect has nominated him for secretary of state. Now with Tony Blinken, we can expect to see a return to the policies and militarism of the Obama era. Now people tend to forget, but US interventions under the Obama administration include toppling the government in Libya, bombing and droning civilians in Yemen, launching airstrikes in Syria and of course prolonging the wars in Afghanistan and Iraq.

Mike Papantonio:             Well, this is a, to be real, I mean, it let’s take it down to the facts. This is a guy who, who, who fought for us to invade Iraq, knowing that it was all based on a lie. He had to know it just like everybody else had to know it. Then he wants to go to Libya. He wants to invade Libya. Then he wants to invade Syria. He Opposed withdrawal from, for, for any soldiers in Afghanistan. He opposed withdrawal there. He didn’t want them coming out of Germany. Why? Because he is nothing more than a go-to boy for the arms industry. And Biden knows that, and he’s going to appoint him anyway. How might his secretary of state Blinken differ from Mike Pompeo who, you know wasn’t, I mean, this guy wasn’t a superstar either, but at least he wasn’t a damn war hawk. What’s your take?

Brigida Santos:                   Well, I think Pompeo absolutely is a war hawk, but these leaders are United on militarism. So we really haven’t seen much change in that department from administration to administration, as you’ve already pointed out in the open. Now they’re also unified on their alliances with Israel and Saudi Arabia and on their differences with Iran and China, even though their approaches might be different. Now, for example, Blinken says that he wants the US to rejoin the joint comprehensive plan of action with Iran, aka the Iran nuclear deal, which the Trump administration abandoned. And they want to compete with China through multilateral agreements rather than forcing countries to choose doing business with Beijing or Washington. But like the Trump administration, the incoming Biden administration will likely continue sanctioning Iran and Russia and China also, as it sees fit to accomplish certain goals. Now, there is one interesting thing that we should all be paying attention to over the next four years and that’s Washington’s relationship with Saudi Arabia. The president elect has vowed to stop selling weapons of war to Riyadh. We’ll see if Tony Blinken helps carry out that campaign prime, promise. But where Blinken truly differs from secretary of state Mike Pompeo, is on climate and health related diplomacy. The Biden administration of course plans to rejoin the Paris climate accord and the world health organization as soon as possible.

Mike Papantonio:             But how does that help us if we’re picking fights all over the, all over the world, gone to war? Killing our young people in this country simply so the weapons industry, so Blinken can diff, can deliver on the weapons industry. Now you differed with me on Pompeo, you, he’s not your, and I, and I respect that. You don’t think he’s as much of, you think he’s the same war hawk that Blinken is. But at least Pompeo support, supported the idea, let’s get out of Afghanistan, let’s end the war. Let’s take some troops back out of Europe to where the EU understands that they have to stand on their, they have stand on their own feet. We’re not going to be the rattles, there to rattle sabers. Blinken isn’t as hawkish as Susan Rice, which Biden also reportedly considered for the job. But aren’t these people that have just been up there, they’re like, they’re like gimps. Take them out of the box when you need them. These guys, these people have been there forever. And don’t we, don’t we say there is a new notion about how we ought to engage in, in world affairs? This guy doesn’t do that for us at all. What’s your take?

Brigida Santos:                   No. No, of course he doesn’t. And as I said before, you know, Blinken made a mistake when voting to authorize the invasion of Iraq. He now admits that it was a mistake, but he hasn’t said he would now support withdrawing troops from Iraq and Afghanistan. And he hasn’t shown any interest in closing the revolving door between the defense industry and the public sector. Blinken will merely restore US foreign policy to what it was prior to the election of Donald Trump, which is arguably something that got Donald Trump elected in the first place. And Blinken will also resume his role of pushing Biden in a more aggressive direction, which is exactly what he did on Iraq and Libya.

Mike Papantonio:             Yeah. I mean, yeah, I’m sorry. I made a mistake. Oh, I’m sorry, your, your, your daughter or your child came home in a box out of a war that never should have taken place. I’m sorry. I just, it’s just it’s, it’s disgusting to me. And the fact is nothing ever changes and that’s what we’re going to see with this administration. I’m very afraid of that. Brigida, thank you for joining me.