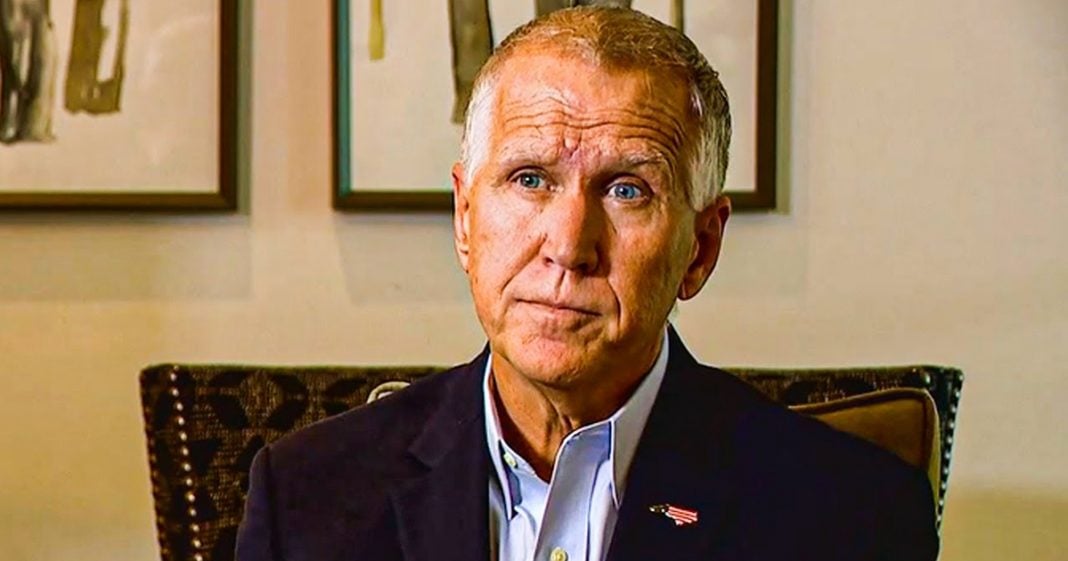 Republican Senator Thom Tillis has proposed a rider to must-pass funding legislation for the federal government that would make it a felony punishable by prison time if an online streamer violates copyright law by showing a clip from another network or by using music. Tillis has taken thousands and thousands of dollars from the entertainment industry, and this is what they get for their money. Ring of Fire’s Farron Cousins discusses this.

Have you ever been watching somebody’s YouTube stream or their Twitch channel or even their stories on Instagram and thought, you know what? I would like to see this person go to prison? Well, apparently Republican Senator Thom Tillis has had those thoughts because he is introducing a writer to an omnibus spending bill. One of those must pass spending bills to keep the government open Tillis is, is drafting a writer to that bill that would make it a felony for any utuber any Twitch streamer, even on your Instagram, if you use copyrighted material, you know, showing, uh, a video clip from another network, uh, using a song, you know, a popular release song, uh, yeah, you’ll go to prison. If Thom Tillis has his way, that is what his writer, which has not been officially released, but that is what he’s trying to do. Make it a felony for you to use copyrighted material on your YouTube, uh, stream your Twitch stream, whatever it is now, here’s the thing.

Uh, these groups, YouTube, Twitch, Instagram, all of them, uh, Instagram, I think is actually not that good with it, but YouTube and Twitch are, if you’re running copyrighted material, they’re going to flag you. They’re going to pull it. And typically what they do is they take your revenue off that video and they give it back to the owner of the original copyright. If they file a copyright strike against you, um, Tila says, nah, that’s not good enough. Let’s send them to jail. And according to a new report by sludge, we now know why Thom Tillis wants to do that from sludge in the third and fourth quarters of 2020 us, his campaign and leadership pack receive donations from PACS affiliated with the motion picture association, Sony pictures, ASCAP universal music group, Comcast and NBC universal, the internet and television association, Salem media, group, Warner music and others in the entertainment cable industry, money talks in water. [inaudible]

DC, more than anywhere else. folks’ money talks. And this guy has taken so much money from these entertainment groups from the Hollywood, the Hollywood liberal group that he’s going to say, no, I’m sorry, sorry, but if you run a fallout boy song and your YouTube video, yeah. You’re going to prison for that. This is nuts folks. I mean, this is absolutely nuts. Look, we’re sitting here this week hearing, uh, right-wingers uh, themselves over YouTube saying you can’t run a video claiming there’s voter fraud and saying, Oh, we’re being censored. Cool. While you’re talking about that, this Republican Senator literally wants to send us to prison. Look, we hear it. Ring of fire. We run clips, Fox news. We’ve run clips from CNN and MSNBC. We run all kinds of clips. Well guess I’m going to jail. Sorry, somebody, please look after my children and wife for me, this is ridiculous. There is real actual, like consequential censorship type things happening in this country, but it’s not the BS claims coming from Republicans. It’s coming from Republicans with power who are trying to sensor the internet and send people to prison in the process.