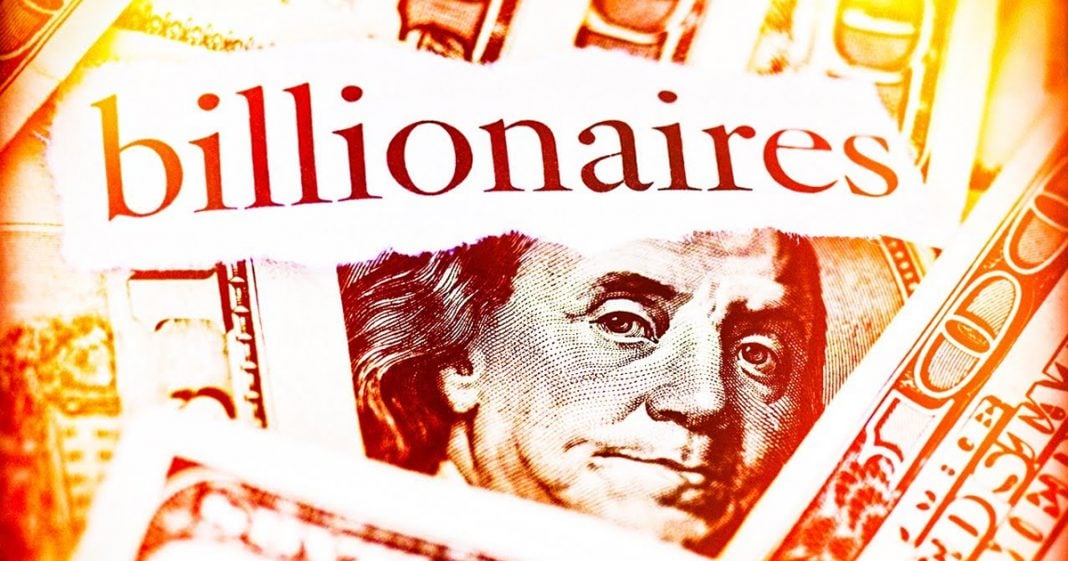 According to new data, the profits that billionaires have pocketed during the pandemic alone would be enough to send every single American citizen a $3,000 stimulus check. At a time when millions of Americans are going without food and millions are facing eviction, those at the top of the economic ladder are doing better than ever. The system is designed to protect them, and the government makes sure that it stays that way. Ring of Fire’s Farron Cousins discusses this.

A new report this week from the group Americans for tax fairness has revealed that the amount of money that the 651 billionaires in America made from just March through the beginning of December $1 trillion, by the way, is how much billionaires increased their wealth by in that nine month span, which would be enough, according to this report to give every single American citizen $3,000, a $3,000 stimulus check just from the profits that billionaires 651 individuals have made in the last nine months, 651 people made a collective $1 trillion. During this pandemic, as millions of Americans lost their jobs, millions facing an eviction crisis, one in four children in this country going hungry, 651 people get to split a trillion dollar that’s America. That’s the American capitalistic system at work. Of course, that is our federal government propping up those at the top.

By stepping on those at the bottom that’s what’s happening here, Congress right now is arguing over whether or not to actually give relief to struggling Americans. Oh, do we continue to increase unemployment benefits? Do we actually need to send people checks? Eh, who knows? But one thing we do know is that every version of the compromise that’s come out has included corporate immunity so that when the corporation send you to work and don’t give you the protections and know that you’re exposed to people with COVID, you can’t Sue them. So there’s no question about whether or not to protect corporations with Congress right now. They, they always 100% of the time say, yes, let’s do that. But the public they’re literally fighting over whether or not they should. And even the ones who say that we should, they’re still not willing to give us self help.

That’s what I mean. When I say the system props, these billionaires up the congressional system, the electoral system, the political system in the United States is designed to preserve the power and the wealth and the status of those at the very top. And it does it by stepping over every single one of us, there is more than us, by the way than there are of them. There’s only 651 billionaires in the United States, 651. There’s more of us. We have all the power, which is why they try so desperately hard to hold us, to push us down and to keep us down because they know that if we ever organized against them, they’d be screwed. They could not deny our demands anymore. If we all banded together, which is another reason why they keep us fighting against each other left versus right. Oh, you don’t want to join up with that person.

They’re a Trump supporter. You don’t want to join up with that person. They’re a socialist Democrat. And then we fight each other. Instead of fighting the real enemies. The real enemies are the ones who are hoarding America’s wealth. The real enemies are the ones who make you work 60 hours per week. They don’t allow you any vacation time. They continue to pay all that money that should be being paid to you for your overtime. They’re paying it to congressional candidates, to Senate candidates so that when they get an office, they vote against things like paid sick leave or maternity leave or mandatory vacation time. They pay off local judges. They pay for their elections so that they consistently rule against the consumers. And in favor of the corporations, the entire system is rigged against us. And then at the end of the day, no matter which side it is, they tell us that it’s the other side. That’s the problem. They’re the ones that you need to fight with. Fight with the worker next to you, not the manager above you. That’s how they do it. Everybody needs to be aware of that. And however you choose to use that knowledge going forward. That’s up to you, but that is the way it happens in the United States.