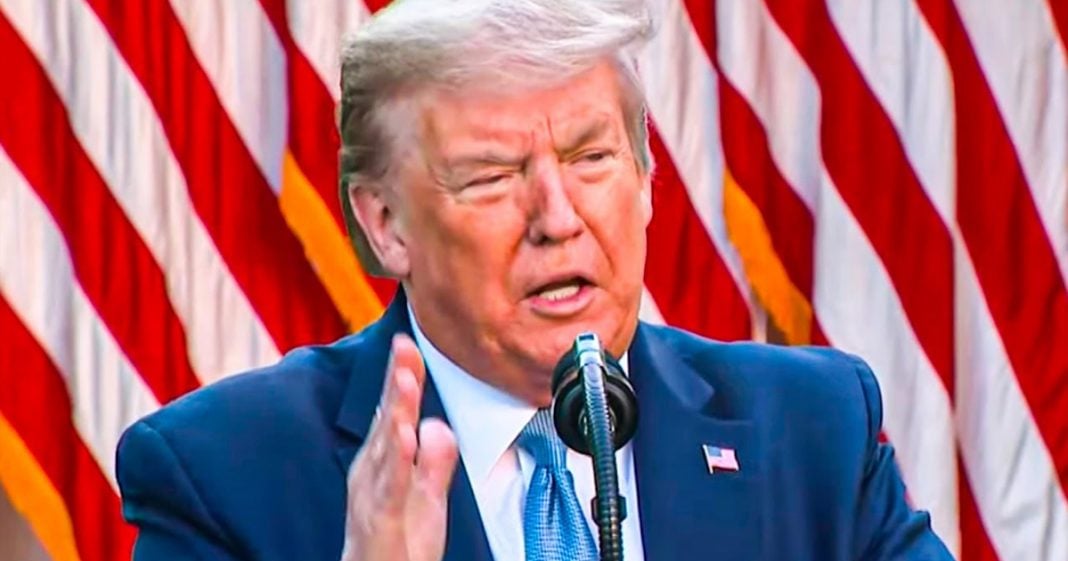 Less than three weeks ago, about half of the country said that Donald Trump should run for President again. Three tantrum-filled weeks later, the number of people who do NOT want Trump to run again has risen to 60%. This is what we mean when we say that Trump running for President again wouldn’t be successful, as the more people are reminded of his insane antics the less likely they are to want more of it. Ring of Fire’s Farron Cousins discusses this.

A little under three weeks ago, nearly half of the country said that they would be absolutely. Okay with Donald Trump running for president again in 2024, then we went through basically three weeks of whining, crying, temper tantrum, nonstop lies from Donald Trump. And now the latest round of polling shows that, Oh, he’s lost even more support. And now 60% of the country says that no, Donald Trump should not run again in 2020 for a 10 point shift in the number of people who said that he shouldn’t. What about the people who said he should, 47% said he should run again in 2024. Now only 32%. They say that a 15 point drop on top that only 67% of Republicans say that they would support Trump. If he ran again, this is coming from the same party who, by the way, voted in over 90% of them, for him to have a second term.

Now only 67% say that they would even support him. If he ran again, now don’t get me wrong. That number, if he did run again, would jump way above 90. Uh, but he is not as popular today. As he was three weeks ago, he wasn’t as popular three weeks ago as he was on election day. Every day, this man loses more and more support, not just among average Americans, but among Republicans themselves. Now I have taken a lot of heat from people, uh, for saying that we shouldn’t worry about Trump running again in 2024. Um, so far all the data proves that I’m right. Like every day I’m being proven more and more right with this because it’s exactly what I told you. What happened. It’s over-saturation of Donald Trump. People are seeing the true colors. Now, people who didn’t want to see them during his presidency, people who wrote them off during his presidency.

You can’t write this off. Now you’re actively watching this man, try to overturn the staple of the American democratic process. The election itself voting. That’s not sitting well with people. They’re watching is 3000 Americans die per day from the pandemic that this man is oversee. That’s not sitting well with people. So when I tell you that I’m not afraid of Trump running again in 2024, I’m not afraid of him holding an event during Biden’s inauguration, announcing his candidacy, bring it on. Nothing on the planet would work more in the Democrats favor than Trump running for president for four straight years and staying in the public eye with of course the exception of passing, meaningful, progressive policies. But we know we’re not going to get that out of the Democrats. So the best thing we can hope for is for Donald Trump to go out there and sabotage his own party, which is what he is doing.

People don’t like him, the polls prove that. And the more he stays out there in the public, the more he talks, the more he throws these temper tantrums, the less popular Hebrew. So let him do it, let him have it stay out there for another four years, because I guarantee you that is going to lead to another four years for the Democrats. But that would also mean another four years of nothing really changing. So is it worth it? Do we do that? I had a better answer, but I’ll tell you what it does mean is that if somebody wanted to challenge Joe Biden or Kamala Harris for the nomination in 2024 against a weekend Republican party, that just suffered another four years of Trump’s tantrums. That may be the time to do it.