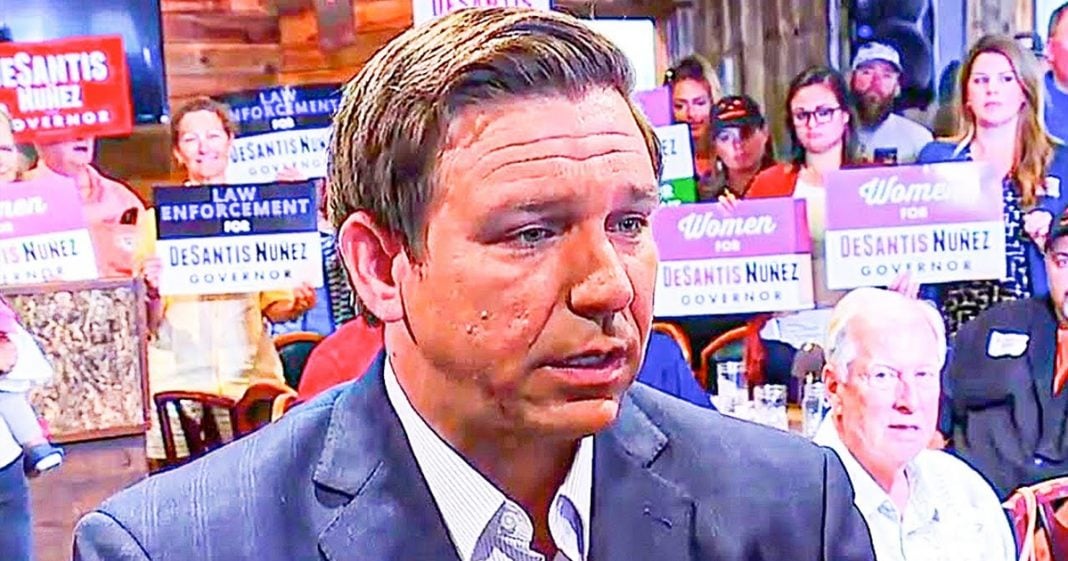 Rebekah Jones, the Florida scientist who was fired earlier this year for allegedly refusing to alter the state’s COVID data to make the state look better, had her home raided by armed agents this week. Jones has been running her own COVID database since her firing, and her numbers have shown that the state is doing far worse than what our Trump-loving governor Ron DeSantis would like for people to know. Ring of Fire’s Farron Cousins discusses this obscene development.

Florida’s Trump loving Republican governor. Ron DeSantis has basically stepped over a line this week. It’s been bad enough that we have had reports for months now, including just in recent days, about how badly the state of Florida is suppressing the data on how bad the COVID outbreak is in our state. But earlier this week, it was revealed by Rebecca Jones, the scientist who Ron DeSantis had fired earlier this year, because she didn’t want to edit her data to look more favorable upon the state. Her home was rated by armed agents. As she put it, they pointed guns at her. They pointed guns at our kids. They showed up at her house to essentially perform a raid. Now Jones had been running her own database. Now no longer able to run it for the state. She’s been running her own database, uh, with COVID numbers for the state. And as best we can tell at the moment, it off our Republican leadership here in Florida, to the point where they felt that this woman was a big enough threat to raid her house, armed to the teeth, ready to fire upon anyone. They came in contact with in her home.

This I I’m having trouble wrapping my head around what exactly to say. This is one of those stories that truly renders you speechless, which is why it has taken me. You know, a few days after the story broke to really even be able to address it. And even now I am struggling greatly to form thoughts about how disgusting this is because you want to lash out. This is the kind of story that makes you want to just throw things and, and scream profanities, because this is the state that I live in. This is what I’m living under here, millions other too. And the problem is most people in this state are okay with it. I’m not, I am absolutely not. I’ve lived here my whole life. And this we have sitting in the governor’s mansion makes me want to leave this state leave. You know, my, my, my extended family, that’s all in Florida as well.

Leave them all behind and say, I’m sorry, I cannot do this. I cannot live in these conditions anymore. It is not worth it by any stretch of the imagination. DeSantis has weaponized agents to attack science show that we don’t see how horrible his leadership in the state of Florida has been. That’s what we’re dealing with. There is no way to sugarcoat that. There’s not even another way to say it that’s even more succinct. The man has weaponized the federal government to attack science, literally attack science, to suppress the data, to make us think that everything’s rosy and great and wonderful. When in reality, the state of Florida is going to hell and we’re going to hell fast. We’re in the express lane to hell right now. And it is all Ron DeSantis has fault along with our Republican controlled state legislature. Folks, you want to see what Republicans do to a state when they have absolute power, come on down and take a trip to Florida. I promise you it will absolutely shock you if you’re maybe on the fence about whether or not to vote for Republicans in the future. Oh, come visit Florida for a few months. We’ll scare you straight.