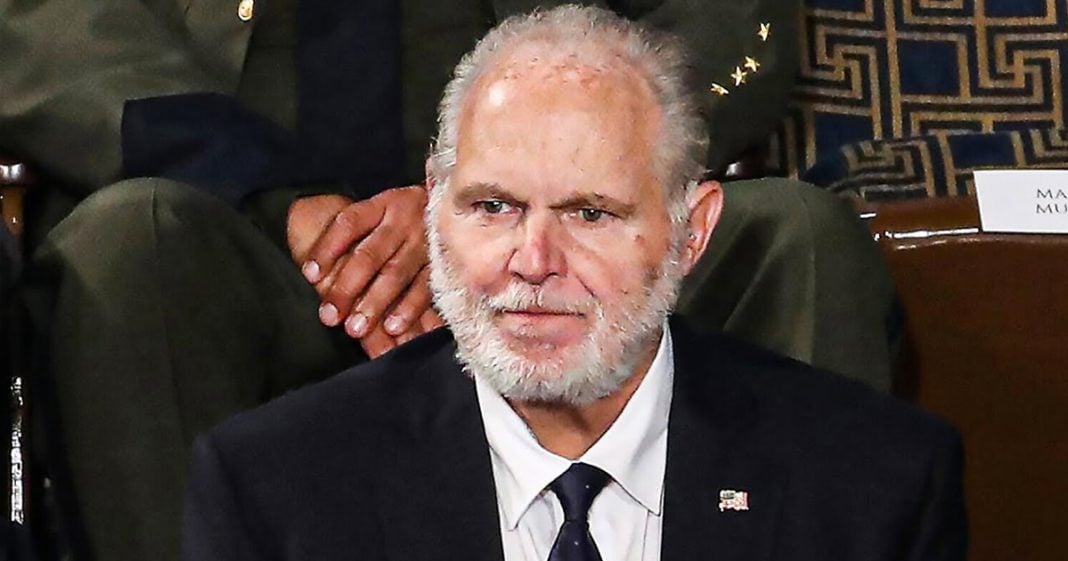 Right wing talker Rush Limbaugh doesn’t see a peace between the Left and the Right anywhere in the future, and he suggested this week that perhaps it is time for parts of the country to begin seceding. While there is plenty of truth to the fact that Americans are divided on superficial issues, we actually agree on far more than we disagree on. Ring of Fire’s Farron Cousins talks about the ridiculous ideas to split up the country.

Well folks this week, we have heard a lot about succession, uh, that would be coming from the right mostly, but we’ve also seen plenty of liberals on social media, uh, sharing their little idiotic maps of the new red States versus blue States after America splits up. And you know, you give, give Republicans, the South Democrats take the North, all of this, but then you have Texas law maker who wants to introduce legislation to have Texas succeed. Then of course you have the King of right wing, hate talk, rush Limbaugh who said this week, quote, I actually think, and I’ve referenced this. I’ve alluded to this a couple of times because I’ve seen others allude to this. I actually think that we’re trending towards succession. I see more and more people asking what in the world we have in common with the people who live in say New York, what is there that makes us believe that there is enough for us here enough of, uh, enough of us here, uh, to even have a chance at winning, especially if you’re talking about votes, uh, moved to a popular vote system, dude, and then none of that matters, but rush don’t you live in South Florida, Like You’re also living in one of those States where if you win your state, excuse me, you’re pretty much, you know, almost guaranteed with the exception of this past election and one other in history before it, uh, you’re pretty much guaranteed to be president. So you live in one of those States that you’re talking about, how much you hate and how it’s not fair that they have this kind of power.

But that aside [inaudible] Session is stupid. It’s stupid when the left talks about it and it’s even stupid or when the right talks about it, because they’re actually talking about legitimately doing it again, lawmaker in Texas is planning on introducing legislation to do this. So the left is dreaming stupid dreams. The right might actually be putting stupid thoughts in action. The country’s divided. Sure. The country has literally always been divided and sure there are absolutely arguments to be made about the fact that just geography wise, this country might be too big to run the way we’re running it. And maybe it needs to be broken up or maybe we just need to redo the way we do government. Have you thought about that folks? Have you thought maybe we could just retool the institution instead of being like, Nope, screw it. This is North USA. This is South USA. You’re a different country. Now you can’t cross borders. Kids who, any of this, we have to be separated all times. No, we could just say, you know what, what if we just fix the government? I know crazy, right? Not to mention the fact that sure. As I said, people are divided, we’re divided politically in terms of which party do we want when you drill down on the issues. Most of us agree on the same stuff.

When you look across the country and you see what happens on, on major holidays. Yeah. We’re all of the same culture. For the most part. We’re all out there doing Thanksgiving and independence day, you know, we’re, we’re barbecuing on Memorial day. That’s that’s American culture, whether you want it to be or not, it is. And we do all still share that whether you’re left, right, independent, green, whatever, most people do those things. So limbo. And I bring that up. Cause limbo goes on to make an argument that, you know, we’re just so culturally different, the left and the right and the North and the South and the East and the West, we are truly not. We really are not. And again, on the issues, We agree vast, The majority left and right want a universal healthcare system. Vast majority is left and right want corporate money out of politics, huge majorities left and right want action on climate Change. This talk Of secession is stupid. This country does not need to be broken up. It does need a governmental overhaul because yes, the way it is right now, our government represents two different individuals. One of them is, is an individual who sits slightly left of center. The other is an individual who sits slightly right of center. If you are not one of those individuals, you are not properly represented with our government today. And guess what?

Most of us are not those Individuals. Most of us are either further to the left or further to the right. You’re not represented. So We’re hauling this governmental system that we have putting term limits in there and getting some of these 30 year veterans who literally can’t remember what meeting. They just went to get them out of office. And that’s, by the way, a reference to the story. He came out this week about Diane Feinstein, no idea where the hell She is, but we keep For the same people in the same people in the same people. And then we and moan about division in this country. They’re the ones who are dividing us folks. They’re the ones Who are dividing us while at the same time, going out there and campaigning and telling us that the person next to us, because they don’t support the same party, that they are the real enemy that they are the person we shouldn’t get. Along with that, they’re the person we’re fighting against. No, the left and the right. And every single one of us, we are fighting against the same people. It’s the people at the top. And the people at the top are Democrats. The people at the top are Republicans.

The people at the top are representative Senators, governors, presidents, cabinet officials, all of them, CEOs, Corporate leaders, boards of directors. Those are the people we’re fighting against. Those are the ones who seek to divide us because when you strip party affiliation away from us, a lot of us believe in the same thing. Sure. We have differences on issues. We have differences on the issue of guns differences on the issues of policing differences. This is on what you call people Who want to be called by a different gender Label. But we agree On far more than we disagree on. And most of those issues that we do disagree on are false divisions Created by the media and by politicians, if you didn’t have These like anti-social justice warriors, like Ben Shapiro and Candace Owens, and you know, all these other, you know, Steven Crowder types out there, if you didn’t have them going out there and telling people that no, it’s ridiculous. You can’t call a man a, she, you can’t call a woman a he that’s insane. Liberals want this to happen to all of you. They want to send, uh, transgender folks into your bathrooms to molest you. If you didn’t have these psychotic idiots out there telling you that most people wouldn’t give a give a Either way.

What do you want to be Called? Fantastic. We’ll call you that. It doesn’t change my life at all. It doesn’t bother me. It doesn’t affect us. Why should we care? And deep down most of us, again, we don’t, we’ve been told we have to, we have been divided by the halves because we, the have nots outnumber Them. That’s the truth. That’s why this happens. There is more of us than there are of them. We have the power. They do not. They have the money, which makes them think they have the power It’s not left versus right. It truly is not. When you drill down to the people of this country, it is not left. And right. We are not as divided as rush. Limbaugh is saying, we are, as liberals are saying, we are, as the politicians in Texas are saying, we are, we are not. We agree on most things, but it’s these people in their positions of power who understand that their positions of power Or are threatened if we use Night that continue to divide us amongst ourselves so that they don’t lose power. And if there was this big succession movement, people like rush Limbaugh, they’d be fine. The wealthy elite They’d be fine. Those right-wing talkers. Oh, they’d be fine. They’re pulling in millions a year from their streams. They’re good. It’s just theRest of us who would suffer as a result of that.