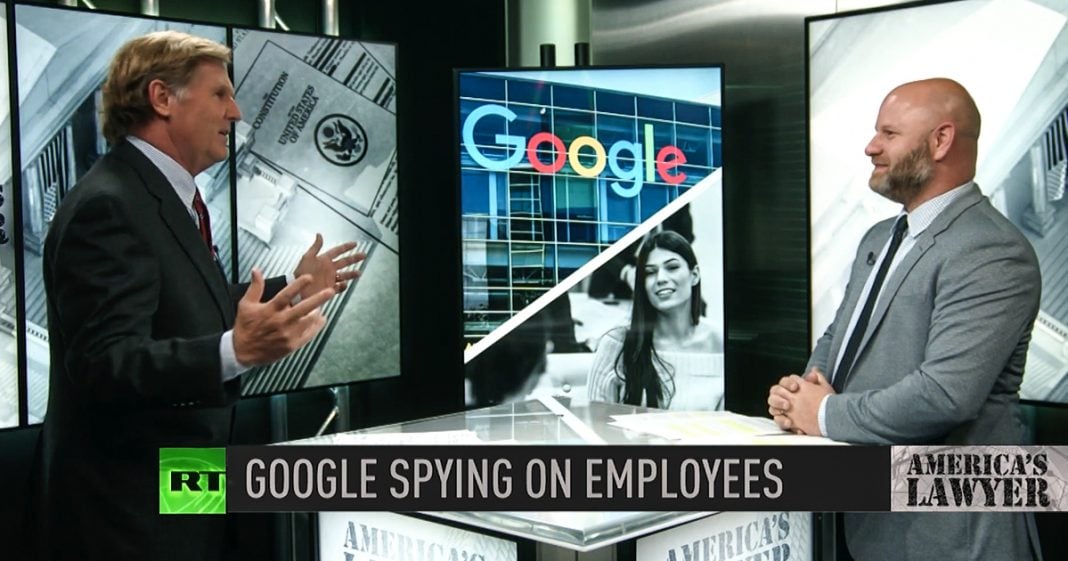 Via America’s Lawyer: Google has been actively spying on its employees to prevent them from unionizing. Mike Papantonio & Farron Cousins discuss more.

Mike Papantonio:             A new reports revealed that Google has been spying on employees to prevent them from forming unions. Okay. You and I I think have chuckled about this in the past. This is the company that their motto, this is their slogan. This is the slogan that they advertise. Don’t be evil. Okay. Sounds like it was put together with a high school sophomore and they said, oh, this sounds cool. Don’t be evil. Now tell us the story about this don’t be evil company.

Farron Cousins:                  Yeah. Then Google decided, well, we don’t need that slogan, let’s just be evil. What happens if we do that? So you have a pair of employees that had been essentially, not even aggressively trying to unionize, but they were working on getting workers organized and unionized fighting for better rights. Google comes in after basically surveilling them for quite some time, fires them, retaliates against them as, you know, essentially warning the rest of the workforce. If you follow the path of these two, you know, radicals, you will meet the same fate. We will fire you. So now they’ve been popped with all of these national labor relations board complaints and violations. But, but nothing’s going to change with Google. This is what’s so sick, nothing will change.

Mike Papantonio:             You know, you look at Google headquarters. They’ve got the Google dining room, they got Google bicycles.

Mike Papantonio:             You got Google hats, like it’s some kind of club and all the millennials of course invest in that. Believe, oh, this is a great company.

Mike Papantonio:             Exactly. We got ping pong, pool tables. We got skateboard. You know, so, so here, so all of a sudden you’ve got all these folks working for them that don’t even understand what these evil creeps are doing. Here’s what they’re doing to their employees. They’re spying on their employees. Okay. They’re investigating their employees. They’re terminating employees who said, you know, maybe it’s a good idea that we have a union here. What’s wrong with that? That’s, it is a classic union busting organization. And if you talk to them, oh yeah, we’re progressive. Google loaded up with Joe Biden. You understand?

Mike Papantonio:             They loaded up with Joe Biden because they don’t want any more investigations of them. But it’s fine to investigate all these employees.

Farron Cousins:                   Well, well, and you know, we, we’ve seen union busting obviously since the beginning of the United States, but what we’ve got now is a much more sophisticated program. Companies like Google, and we’ve seen it with Amazon. We’ve seen it with all these others. They’ll scrub people’s social media accounts, looking for words, keywords, wages, you know, organize. Not even the word union, but just trying to figure out.

Farron Cousins:                   Right. Using their algorithms to determine who is going to potentially be a problem in the future. That’s how sophisticated it is.

Mike Papantonio:             In a, in a work place that were there to spy. They don’t even need to do that anymore. You know, they just go online and they can figure out exactly what’s happening.