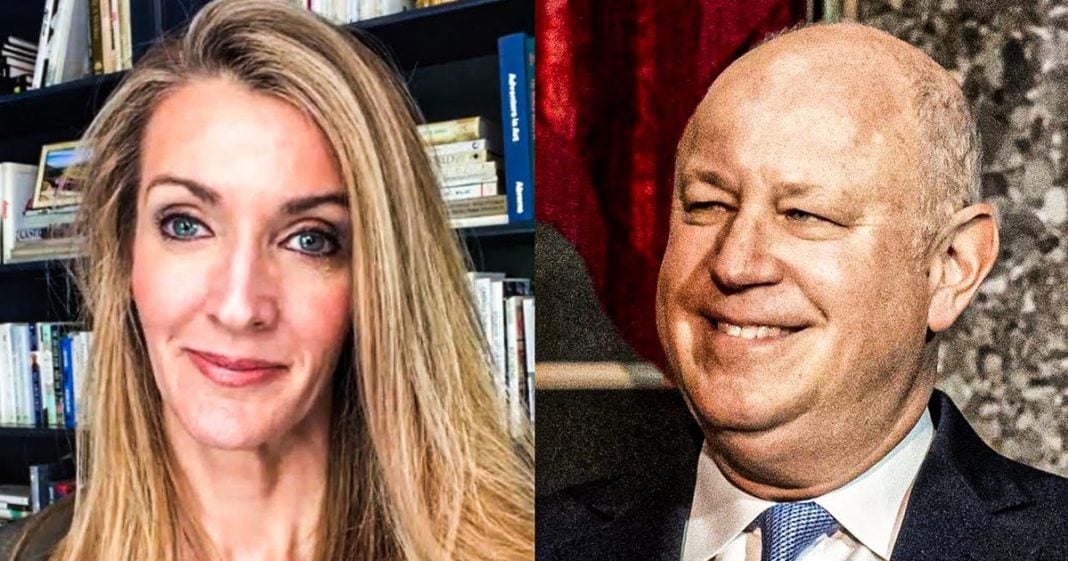 Embattled Senator Kelly Loeffler is fighting for her political life, and a new scandal revealing her husband’s stock trading could further hinder her reelection chances. According to a new report from The Huffington Post, Loeffler’s husband Jeffrey Sprecher, Chairman of the New York Stock Exchange, began trading away stocks and buying new ones that would benefit from the then-unknown CARES Act. He could have only gotten that information through his wife, and this means there could easily be some insider trading happening. Ring of Fire’s Farron Cousins discusses this.

Senator Kelly Loeffler is in the fight for her political life down there in the state of Georgia. She has put all of her eggs into the Donald Trump basket. Donald Trump lost the state of Georgia, but she still thinks that’s a winning strategy. She beat back claims of insider trading earlier this year, when the FBI announced that they were not going to be taking a closer look at what she did, uh, you know, selling stocks immediately after leaving that meeting about the coronavirus earlier this year, I think it was back in January. She did that. And then she purchased a bunch of stocks that, uh, just happened to be industries that would benefit from people working from home. The FBI saw that and said, I don’t see anything wrong, but what about her husband? Right. What about Jeff Sprecher CEO of the New York stock exchange? He did the same thing.

Where’s his investigation? Well, according to new reports, that one might be just around the corner folks. Uh, the Huffington post after, uh, uh, uh, excuse me, published an investigation this week, where they detailed all of the dirty little secrets about Jeff Spreakers stock sales. And it turns out it’s far more sinister than we had previously known. What Mr Sprecher did. According to this Huffington post investigation is while the cares act was being drafted in secret by Republicans in the Senate where his wife worked, um, he started to sell off stocks much like Leffler herself, uh, that would have obviously, you know, not done well during a pandemic. And he purchased stocks and industries that wouldn’t even know it. They had special giveaways for them. And the cares act specifically the insurance industry and the energy industry. Cause you know, those were industries, people, you know, weren’t, uh, they weren’t making as much profit people.

Weren’t using their services quite as much during the pandemic. So they needed a bit of a bailout and as luck would have it, Jeff Sprecher whose wife was a Republican Senator and the Republican senators were the ones who were working on this just happened to know that those were the two industries that he needed to invest in what luck dudes, guilty as hell. If you ask me, the dude is guilty as hell, there is no other way. There is no possible way that this guy has this good, a luck. Considering the fact that his wife was working on a bailout for these industries that he just happened to start buying into. No, uh, this is a criminal action that needs to be investigated. I w w we wouldn’t even say by the FBI, because they’ve shown that they’re not willing to go after Leffler. So maybe local law enforcement, maybe the IRS needs to get involved.

I don’t know, but somebody that’s competent needs to investigate this white collar potential criminal for these actions. This is not coincidental. And yes, folks, this is textbook Loeffler trading, using knowledge that is not available to the public to make stock transactions. That’s insider trading. And to me, clear as day, it looks like that’s what he did. And of course you would have to rope Leffler herself into this because if it turns out, yes, Sprecher did have insider information. Who do you think gave it to him? I don’t think Mitch McConnell made a phone call. I’m willing to bet it was his own wife. Anything else wouldn’t make anything Sense? So This scandal not only has the potential to take down the CEO of the New York stock exchange, but could also severely hinder Loeffler re-election chances in that runoff election that is just around the corner. This story needs to be sent to every single person who lives in the state of Georgia. They need to understand what they had previously sent to the Senate And what they can avoid sending back.