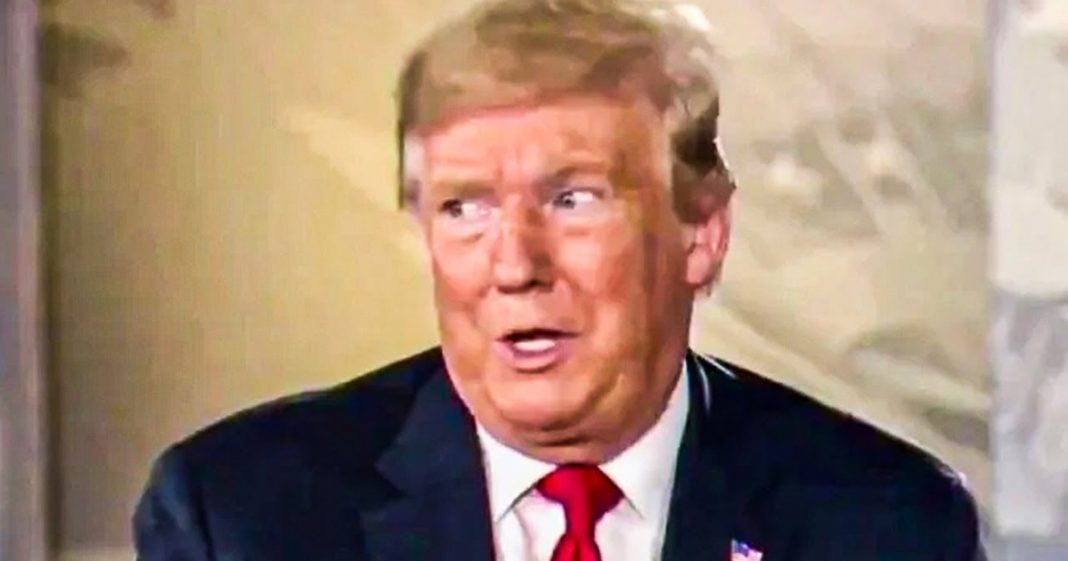 During an event on Tuesday, Donald Trump told reporters that it was “terrific” that so many Americans had been infected with COVID-19 because that was a good way to become immune to the disease. Statistics show that about 15% of the population has now been infected, and more than 3,000 people died from the disease on the same day that Trump made these idiotic comments. Ring of Fire’s Farron Cousins discusses this.

On Tuesday during what was supposed to be Donald Trump’s vaccine summit that nobody wanted to go to. So he just held a coronavirus event, I guess he was talking to the press on Tuesday and he told them that it’s terrific. Terrific. That we, I have so many people in the United States who’ve contracted COVID-19, here’s what he said. And I hear we’re close to 15%, meaning 15% of the population has it. I’m hearing that. And that’s terrific. That’s a very powerful vaccine in itself. So that’s awesome folks. Yeah, that’s really good. Cool that everybody is going out there and getting this horrible disease. And on the same day he said this, we had as many Americans die from COVID as we did on nine 11. So totally, right? Trump that’s terrific. At 3000 people die yesterday too, by the way, two of the deadliest days in American history, actually two of the top 10 deadliest days in American history, this past Wednesday and Thursday, excuse me, Wednesday and Tuesday.

Probably Thursday too, because we’re doing nothing. We’re doing nothing. And we’re letting this idiot run the show. Still people are dying 3000 a day this week, and this guy says, that’s terrific. I’ve done such a good job when you catch it, you become immune to it. Most people sure. That’s how most of these infectious virus viruses are when you catch it and you overcome it, your body has the antibodies and you’re able to fight it off. Next time you get it. Uh, maybe you show symptoms, maybe you don’t maybe, you know, it’s, it’s asymptomatic, whatever it is. That’s what happens with infectious diseases, uh, typically caused by viruses. That’s why the body has an immune system, not just to fight them off, but to remember, uh, in store the copies of the antibodies, that’s what a vaccine is. But what Trump is talking about here is he’s actually thinking we may get to herd immunity before we get the vaccines. And the sad thing is he may not be wrong about that. He’s wrong about it being terrific because in order for us to hit herd immunity, we would have to have saturation infection of about 70 to 80%. And based on the numbers alone, that would mean a couple million Americans dead.

That’s just basic math. That’s on, uh, a best case scenario to hit herd immunity, only a couple million dead worst case scenario, which is likely what would happen. If we did get to herd immunity, uh, we would see more hospitals overflowing. They wouldn’t be able to take new people. You would see more deaths than just one or 2 million. This man doesn’t know what he’s doing. And he thinks he’s doing great because everybody around him keeps telling him he is doing great. He’s diluted himself into thinking that he has done better than anybody else ever. Could. He is leaving Joe Biden, perhaps intentionally one of the biggest messes to clean up in American history. That is what Joe Biden is inheriting. And I have been super critical of Joe Biden’s cabinet picks. Uh, I’ve been critical of his policies, but at the same time, regardless of how I feel about him personally, or his history and his policies, you have to feel a little bit of sympathy for this guy walking into again, the biggest mess inherited. Now he had previously stepped in as vice-president to a massive mess, but that one pales in comparison to what he is walking into. Now that Trump is leaving him again. Perhaps intentionally Trump is doing this. We’re going to see thousands upon thousands, hundreds of thousands, possibly more people die. That’s a fact.

And it’s because this administration from the top down has refused to take any kind of national action to contain the virus, no federal actions at all. Everything is done on a patchwork basis, state by state 50 different ways in 50 different places. That’s the problem. We need national policy to combat this cause sure, catching the virus and surviving it is a great way to become immune to it, but not everybody makes it into that second category. Now had we done the social distancing thing? Had we been paid by the government in the form of stimulus to stay home? Had we all just worn masks? If we did have to go out, we could have knocked this thing out months ago, but no, we had to bring our unique American arrogance to a pandemic and the virus still won.