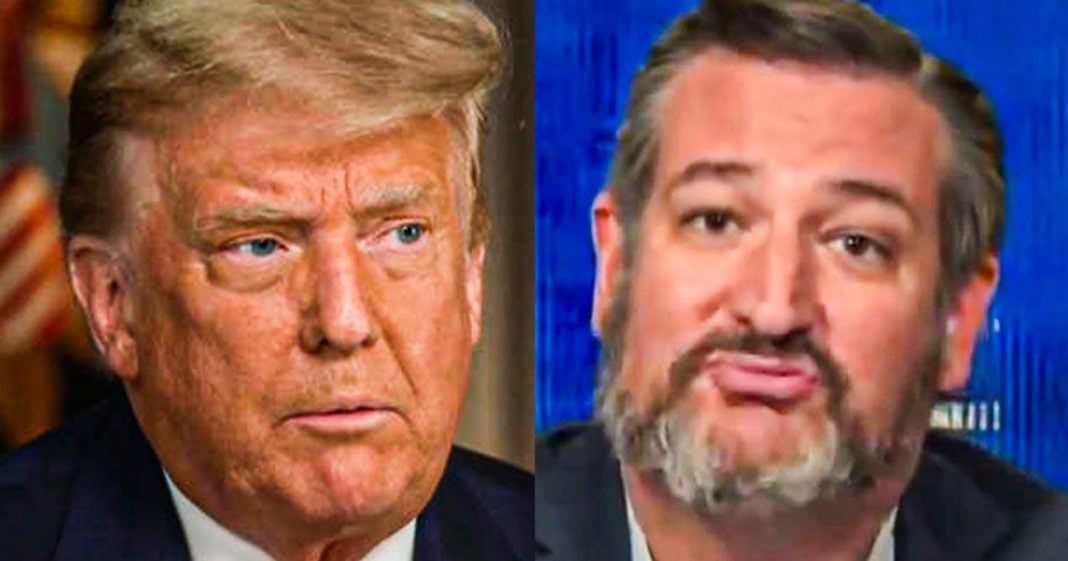 Donald Trump is out of options, and he thinks that the only way to save his presidency is to beg Ted Cruz for help. Cruz has already offered to take Trump’s election challenge to the Supreme Court, but the case fails on its merits regardless. But Ted was given the opportunity to be the alpha for once, and he blew that chance immediately. Ring of Fire’s Farron Cousins explains what’s happening.

Well folks on Wednesday, Donald Trump finally did the unthinkable and he reached out to Ted Cruz. The man he insulted mercilessly all throughout the 2015 Republican primary caught him lion. Ted Cruz said his wife was ugly and salted his entire family tree yesterday. Donald Trump, the great Cult leader reach And had to beg Ted Cruz for help. Trump specifically asked Ted Cruz to follow through on his promise from earlier in the week and represent him at the United States Supreme Court. Now I had discussed yesterday at length. The fact that Ted Cruz offered up his services to represent the state of Texas, uh, which has now been joined by the way by 17 other States, uh, challenging for States election processes. Now these lawsuits have no chance of winning each state. According to the constitution is allowed to, uh, determine how they hold their own elections, how they pick electors. The Supreme court can not do anything about this short of dismantling the entire United States constitution. At which point we’re not even a country anymore.

So, You know, if you do that, it still technically wouldn’t matter Either way. Ted Cruz offered earlier in the week to represent, uh, Texas and argue this case in front of the Supreme court, Donald Trump took him up on that offer on Wednesday and said, yes, won’t you guide my lawsuits tonight, essentially. Uh, then all the Republicans loved him, Which is exactly Ted Cruz won it. Now think about this. Now, yesterday, I explained that Ted Cruz was doing this as a way to appeal to Trump’s base and saying, listen, I fought side by side with him. I did everything I could. I stood up for you when nobody Else would. Now his Argument in just the last 24 hours, since I said that has been incredibly bolstered because now Ted Cruz gets to go out there to the manga crowd and say, when your leader was in his time of need, when he asked somebody to come rescue him, who did he call upon? He did not call upon Mitch McConnell. He did not call upon his buddies, Matt Gates, or Jim Jordan or Ron DeSantis. He called on me. He trusted Me. I am the one that he thought could help him.

That is a powerful argument that I can promise you is going to propel Ted Cruz to the top of the next, uh, poll that asks people. Who’s going to be the next Republican nominee. I guarantee you, it is going to bolster his numbers. That is a strong and powerful argument. And Trump being a weak, uh, you know, pathetic groveling man, Going to Ted Cruz that makes Ted Cruz look stronger. This is exactly what Ted Cruz wanted. It doesn’t matter that the suits are going to fail. It doesn’t matter that they don’t have merit or standing. Ted Cruz understands that. But Ted Cruz is politically smart. Anyone who says that Ted Cruz doesn’t know exactly what he’s doing is lying to themselves or they’re lying to you. Ted Cruz is very cunning and very calculated.

And to be honest, he’s not bad at what he does. Outlook. Look, I hate the guy. I hate him. He’s a slimy little weasel, Which wheels weren’t even supposed to be slimy yet. He is. However, look back at what Ted Cruz did during the 2000 election Bush V Gore, that was Ted Cruz. Ted Cruz is the one who assembled the legal team for George W. Bush, which included now Supreme court, uh, chief justice, John Roberts, good friends with Ted That’s terrifying. Ted Cruz is the one who assembled these people, wrote the briefs, filed them with the courts and ultimately won. Now I’m not saying That should worry you with the lawsuit. It should give you cause for concern. Sure. Um, but I’m saying that Ted Cruz is more politically connected than we think. And Donald Trump was the one person who stood in his way that prevented him, Ted Cruz from getting the nomination in 2016. And now that same person is On bended knee saying, please, Ted. You’re my only hope, extra point. Everybody who can, uh, go ahead. Name all of the movie references I’ve made in this video, but you get the point. Trump bowing Down to Ted Cruz is a good way for Cruz to anoint himself the new savior of the Republican party. Mark. My Words, that’s where we’re headed.