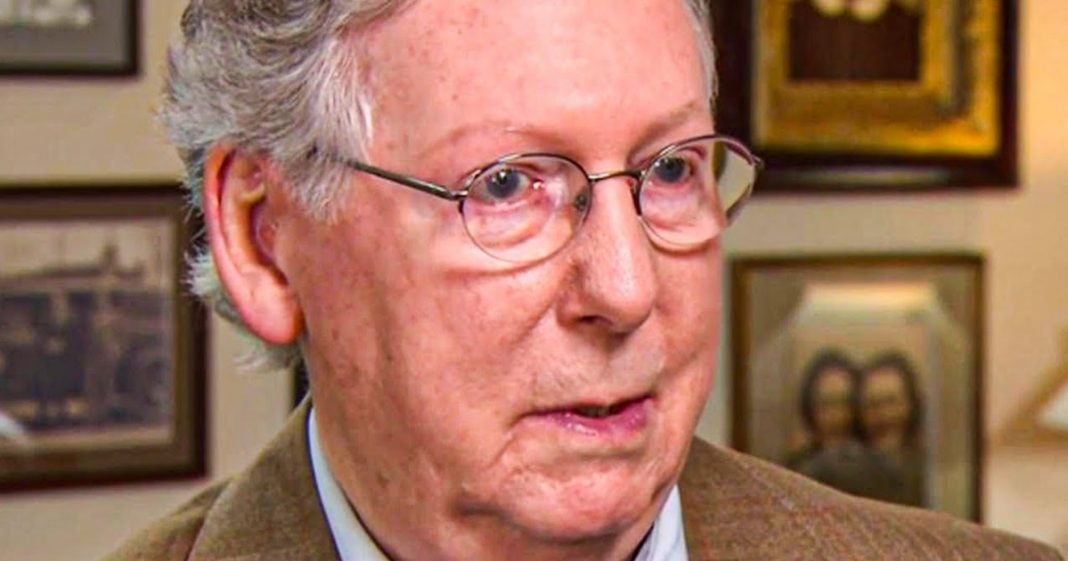 Neither the Republicans nor the Democrats can seem to get their heads on straight with regards to the ongoing stimulus talks. The latest round of discussions produced a compromise that DID include direct payments to individuals, but they were reduced to $600 and they completely replaced the extra unemployment benefit money that has been given out. These are both awful ideas, but at this point it is unlikely that we are going to see a real relief bill come to light. Ring of Fire’s Farron Cousins discusses this.

Stimulus talks in Washington, DC have apparently come to a standstill at this point with Democrats, accusing Republicans, especially Mitch McConnell of actually sabotaging the efforts and Republicans refusing to actually provide any money for struggling Americans. While also trying to make sure the corporations get immunity for knowingly putting their workers at harm and exposing them to COVID-19. Uh, and actually in the case of some companies like Tyson betting on how many employees would catch the virus and die from it. And those are the people that Republicans want to protect. And the Democrats to their credit do want to protect the American public. They just suck at fighting. And so here we are in a bit of a stalemate. Nobody knows how to move. Nobody thinks they have a move to make the latest round, saw them take away the extended unemployment benefits in exchange for providing a another one-time $600 stimulus check to Americans. That again is means tested, um, which has half of what everybody got back in April. And honestly, I’m afraid that’s the best we can get. I have no faith at all in this negotiation process. Why? Because Mitch McConnell has no reason to negotiate. I explained that earlier this week, the guy was just reelected. He’s got six more years to go before he has to face another election. And by then, he’s going to be in his mid eighties.

He doesn’t Care. He doesn’t have a Republican president in power that he has to protect. The elections are done. His willingness to negotiate is over the person who really screwed the pooch here was Nancy Pelosi. Back in October when we could have had stimulus checks and some other things that were pretty crappy, you know, corporate giveaways in there, but Hey, couldn’t give Trump a win, right? That was the best deal. That one that was left on the table back then was the best we were going to get. And it was still bad. Don’t get me wrong. It was bad, but that was the best we’re going to get because now we’re seeing every time they come back from the negotiating tables, a negotiation table, excuse me, it’s less, you know, the people get less, the corporations get more, the corporations get this, they get that. But people may be, you’re going to get a check. Maybe you’re going to get extended unemployment benefits. I know we’ve got millions of Americans out of work right now. We’ve got millions who on December 26th, their protections expire. We Could be facing a massive eviction crisis on the start of the new year. They have to take action. And that’s the problem because we are facing such a massive crisis right now.

We are going to see in negotiation, we will end up another relief package passed and it doesn’t look like it’s going to be helpful at all. It will probably end up containing an extension of the moratorium, the eviction moratorium, uh, maybe an extension of not having to pay back student loans. That’s already been extended by about a month. Um, probably no direct stimulus. If it, if it does have direct stimulus checks, it’s going to be less than what we got, uh, earlier this year, no extended unemployment benefits, but if there is an increase in that, well, an extension of it, but it’ll be a decrease. You’re not going to get the 400 you’re getting now. It’ll be less than that. And that will basically have to come out of the amount we get for the stimulus checks and it’ll have corporate immunity and a couple of other corporate giveaways in there. That’s what we’re looking at. Watered down relief for the American public and another massive corporate giveaway. Now this is the kind of one that maybe you should walk away from, but unfortunately the double-edged sword of that is you walk away from it. People get evicted, It’s a rock and a hard place for the Democrats. Republicans have nothing to lose and everything to gain Democrats. On the other hand, this is a lose lose for them. If they approve a package, they’re going to get attacked for it. If they walk away in millions, start getting evicted, they’re going to get blamed for it. Even though it was mostly the Republicans, they can’t win. So I don’t know what to do.