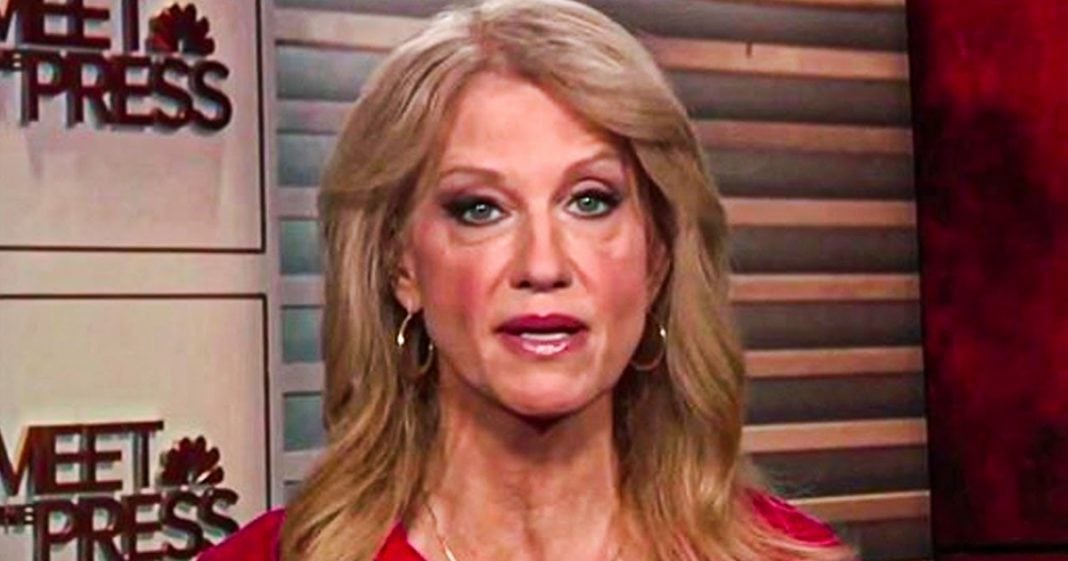 According to reports, Kellyanne Conway has signed a multi-million dollar deal to write a tell-all book about her time in the White House with the Trump administration. This is exactly what we predicted just a few months ago after she announced her departure, and the book is either going to be a hit with conservatives, or it’ll be a hit with liberals, but either way, it won’t be worth the paper it is printed on. Ring of Fire’s Farron Cousins discusses this.

In what might be the most predictable piece of news to come out of the year 2020 Kelly Ann Conway has now signed a multi-million dollar deal to write a tell all memoir about her time serving in the Trump administration. Now, if you want to rewind a couple of months, this is exactly what we predicted was going to happen. When she announced that she was leaving this administration. Why? Well, not because we’re profits, but because this is literally what every high-profile person who’s left, the Trump administration has done. You serve for it. Um, you leave couple months. Oh my God. I got a new tell all book coming out. Oh, you got to read this. It’s going to be a best seller. And of course it becomes a bestseller. How John Bolton got a $2 million advance for his tell all book and the, uh, according to the daily mail Kellyanne Conway’s deal is North of that.

So more than $2 million for her to write this, tell all that is going to be packed, filled with lies. I’m sure there’s going to be a couple of truths to it, but here’s the thing. This book is either going to make her a hero among the conservatives or the liberals, depending on which way she decides to go. And that’s, what’s so funny about this. She can absolutely, with this, this book changed the narrative of her own life. She wants to go anti-Trump we’ll Hey, Kellyanne, Conway. Welcome to the resistance. Liberals are going to welcome her with open arms. It’s going to be disgusting, just like what they did with the Lincoln project. But if she trashed her trashes Trump in the book, Kellyanne, Conway’s now good. Now, if she sucks up to Trump, if this entire book is just verbally fileting him, then conservatives are going to once again, hoist her upon their shoulders.

And she will continue to reign Supreme as their evil witch queen. Those are the two options and it’s Oh, sick and disgusting that most of this country is so easily manipulated that she could do. Either one. She really could do either one and no matter which one she chooses to do, she is going to make millions of dollars off this in advance. That’s crazy. We let these people, we let them rewrite their own legacies, right? This is the bowling green massacre woman. This is the alternative facts, woman. This is the nonstop attacking the press, calling them fake news, going on their shows, just to yell at them and lie to them woman. She is a horrible, horrible human being. And if you don’t want to take my word for it, why don’t you go look at her daughter’s social media accounts. Kellyanne Conway is not to be trusted. And the fact that this country would absolutely allow her to her own history tells you everything you need to know about American politics. The media is more than willing to go out there and rehab any one they can. And Kellyanne Conway is going to be no exception. And she’s the one who’s going to be laughing all the way to the bank.