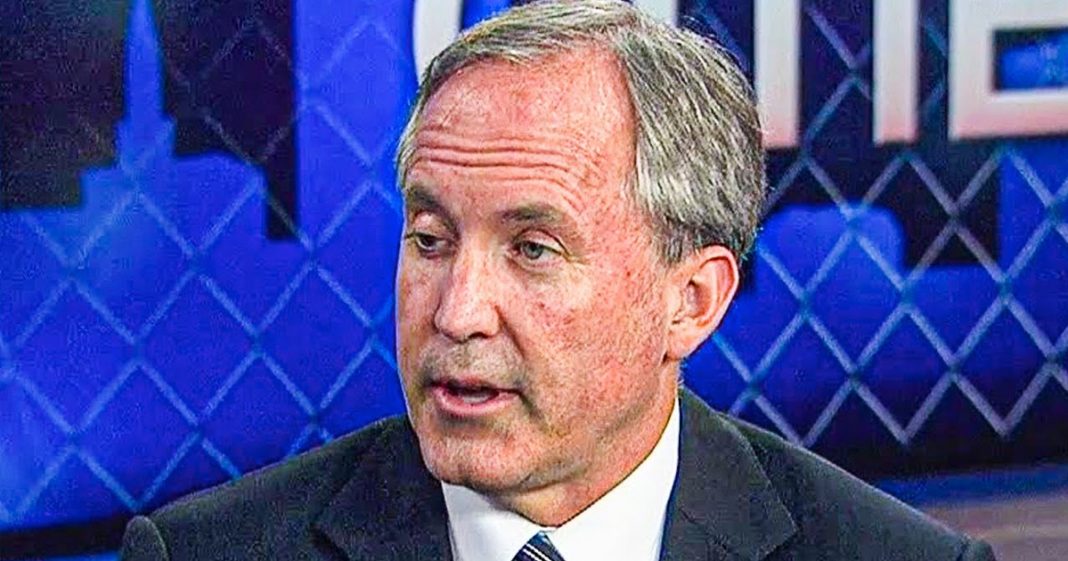 Ken Paxton, the Republican Attorney General of Texas, has filed a lawsuit seeking to overturn the election results in Georgia, Pennsylvania, Michigan, and Wisconsin. This lawsuit is absolutely designed to fail, as the state of Texas has absolutely no standing to challenge the way that other states conduct their elections. Paxton likely knows this, but that hasn’t stopped him from showing the world how stupid Republicans can be. Ring of Fire’s Farron Cousins explains what’s happening.

The Republican attorney general of the state of Texas man, by the name of Ken Paxton has filed a lawsuit against Pennsylvania, Michigan, Georgia, and Wisconsin, Trying To overturn the election results in those States. Now, to be fair to Mr. Paxton here, this is actually the first lawsuit that’s been filed that actually could overturn the results of the election. The ones that Donald Trump has filed, um, as I’ve talked about, he hasn’t challenged enough votes to actually overturn the results of the elections. Even if he had been successful in his court cases, wouldn’t have overturned the results. Ken Paxton obviously knows what he’s doing. So he came out this week and said, I’m suing the States to overturn their results, except here’s a problem that I’m sure Mr. Paxton and attorney general would know this. Um, you don’t have standing to do that. You see the state of Texas has no legal say whatsoever in Georgia elections or Pennsylvania elections or Michigan elections or Wisconsin elections, or in elections in any of the other 49 States that are not Texas in the United States to put it in another way, he can’t do this. And the idiot knows he can’t do it. He’s doing it to appeal to the rabid Donald Trump base because Ken Paxton wants to have a longer career in American politics.

He wants to be more I’m assuming than just the attorney general of the state of Texas. One of the things he is alleging in his lawsuit is that Georgia is violating their own state rules with their absentee ballot, elections, signature confirmation, or authorization, whatever it is, uh, and that 80,000 votes Need to be thrown out immediately. He has no evidence that 80,000 votes are fraudulent. He has no evidence at all. And in fact, in the ones they’ve looked at, they found no fraud whatsoever. So let’s assume for a second. Even if Mr. Paxton did have the standing and did, if Texas did have the authorization to interfere in other States elections, you still have no evidence. So your case would be thrown out. That’s what’s so fun about these we’re watching in real time, the Republican party of the United States from coast to coast, show us how incredibly incompetently stupid. They are. That’s what this is. This is a level of Republican stupidity that is usually, you know, kept behind doors. They don’t always put this kind of, you know, stupidity on display, but here they are showing the entire world look how dumb I am. I’m filing a lawsuit that I know is fraudulent.

And I know that I don’t have standing to do, but I’m doing it because I’m a good little lapdog folks. This country sick, the Republican party itself is an animal that is infecting the entire United States. There there’s. There’s no other way to, to see it at this point. When you look at what these Republicans are doing, knowingly violating the, the legal rules in this country to file lawsuits, they know are fraudulent in areas where they don’t even have standing. Mike, God, I never thought we’d hit this point as a country. Yet. Here we are. The state state of Texas leading the way showing the world just how stupid Republicans can be. Don’t worry about this lawsuit. Folks, please do not worry about this lawsuit. Something to laugh at. It’s something to realize Republic Kinzer bit nutty, but it is certainly not something that we need to be afraid of.