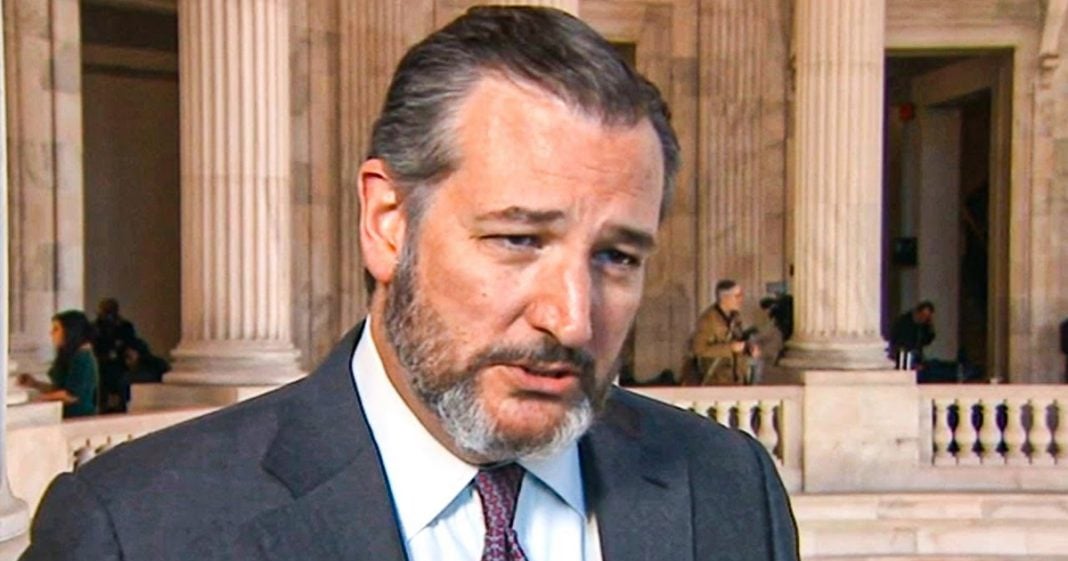 Ted Cruz announced that he is willing and ready to argue an election challenge in Pennsylvania before the Supreme Court. Ted knows that the case has no chance of actually succeeding, but that’s not the point. This is the start of Cruz’s 2024 Presidential run, and he’s putting himself out there as the biggest defender of Trump in order to get the Trump voter base on his side. Ring of Fire’s Farron Cousins discusses this.

So we’ve already discussed the lawsuit from the actual state of Texas challenging election results will folks. There’s also other folks in Texas who want to get in on the same level of stupid that the leaders of Texas or RN and the person standing out the most is Ted Cruz, Ted Cruz tweeted on Tuesday that he is willing to take an election challenge in the state of Pennsylvania. On behalf of Pennsylvania representative, Mark Kelly, all the way to the Supreme court, Ted Cruz even offered to give the oral arguments in the case. Here’s what Ted Cruz, Sweden petitioner’s legal team has asked me whether I would be willing to argue the case before SCOTUS. If the court grants search Ori, I have grade, and I told them that if the court takes the appeal, I will stand ready to present the oral argument. As I said, last week, the bitter division and acrimony we see across the nation needs resolution. I believe SCOTUS has a responsibility to the American people to ensure within its powers that we are following the law and following the constitution. Now here’s the problem Ted Cruz has with this lawsuit being filed by Mark Kelly, uh, it’s total crap, much like the one, the state of Texas filed against all the swing States.

The one that Mark Kelly has filed in the state of Pennsylvania challenges, the States vote by mail rules, but that was a law passed by the state. Like they Approved it. They let it happen. They said people can vote by mail and we’re going to change the deadlines because we in the state have the authority to decide how we run our elections. That’s in the constitution. This is what we decided On. That’s Done. That’s it. You can’t change that. Mark Kelly. It is done. What’s the Supreme court going to do. If the Supreme court were to throw this out, they would then actually have to have the state of Pennsylvania revolt. Because people Knowing that the state said, this is what you do. That’s what they base their decision on how they were going to vote. So if you suddenly retroactively take that option away, they would then have to be allowed to revote. Just the folks who By mail you see where Like there’s nothing Mark Kelly can do to change this.

Even the Supreme court is going to look at this and be like, yeah. Um, constitution says, States can do what they want to do. That’s one thing that is very clear. The States determine how the voting is conducted in the States. The States determine how the electors are chosen. So that’s the other thing. Even if they go and they overturn the election results and say, ha, the state can still a cool, we’re still going to have a faithless electors that are going to vote for Joe Biden. Oh, well you just lost again. And that’s the thing we’re getting to at this point. Like how many more times do Republicans want to lose? Well, the answer is Ted Cruz doesn’t want to lose, actually I think Ted Cruz does want to lose the case. Ted Cruz is out there throwing himself in the middle of this because Ted Cruz wants to run for president in 2024. And he wants to argue this case so that he can use that as the grounds to get everybody in Trump’s based on his side. He knows he’s got a problem with the base. After all Trump’s spent years, um, insulting him, insulting his wife, insulting his father. I mean, going down the whole family tree and just insulting everybody in the cruise line up there.

And Ted Cruz knows that. So he’s got to do something to win over Trump so that he rescinds all those attacks and is nice to him. And to get that base on his side so that if, when Ted Cruz runs in 2024, he has the Trump base, which is automatically going to propel him to first place. And the best way to do that is to risk your entire reputation, going to bat for Donald Trump. And then going back to the base and say, listen, I tried, I fought it. I was the only one who fought it. I’m the only one on your side. I have the record to prove it. It’s desperate. It’s pathetic. He knows what he’s doing has no chance of success. Yes, but that’s the point. He doesn’t need the show that he won. He just needs to show these people that he’s the only one who tried this ladies and gentlemen is the beginning of Ted Cruz’s 2024 presidential campaign. And it’s only going to get uglier from here.