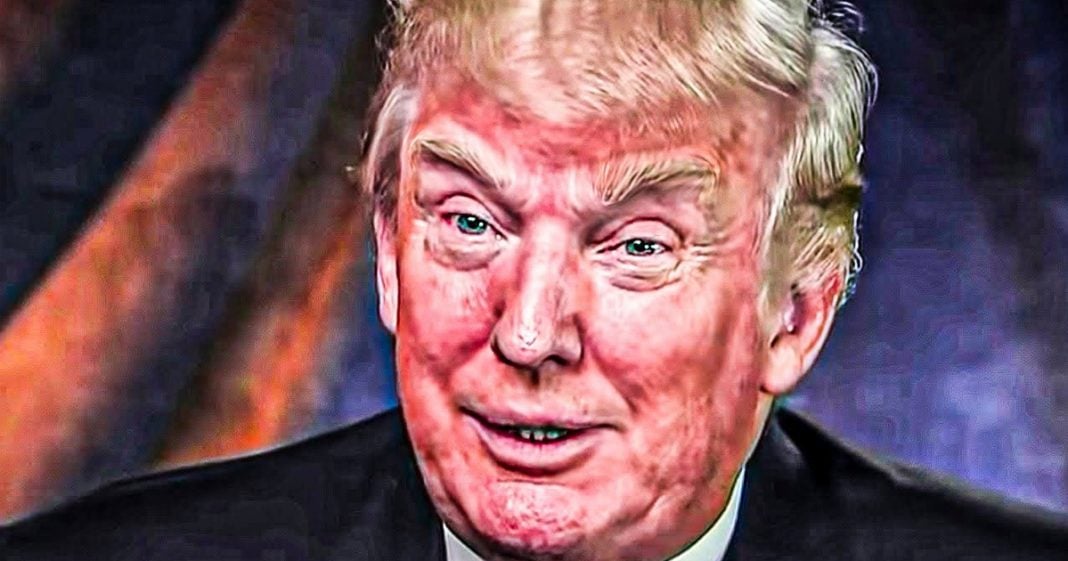 Reports are still swirling about the possibility of Trump running for President again in 2024, and there are plenty of experts who say that we absolutely cannot let this happen. Why not? The more the President is out there in the public eye, the more the public rejects him. Is it not better to let him sabotage himself and make people sick of seeing him? Ring of Fire’s Farron Cousins explains what’s happening.

As Donald Trump continues to hint at the fact that he is going to run for president again in 2024, a lot of folks on the left are worried about what that could mean. You know, Trump was very difficult to beat in 2020. He wasn’t able to be beaten in 2016, except of course, for the fact that in both of those elections, Donald Trump lost the popular vote. He lost the popular vote this year by more than 7 million votes. Uh, really wasn’t even that close of an election at all. Trump is beatable. Sure he got more Republican votes than ever, but 7 million more people showed up to say, no, you’re not going to get a second term, but nevertheless, another headline this week that I could not disagree with more. And this one from common dreams, absolutely. One of my favorite news sites, uh, they’re quoting a couple of experts here and they say experts it’s possible and necessary to stop Trump from running in 2024.

And the experts are political scientists, Alexander Kershner and Claudia Lopez who era. And they say that Congress because of Trump’s actions, since the election needs to impeach him, they need to make it to where he cannot run for office. Again, because he’s been impeached and the Senate obviously would have to convict something that we all know would never happen at all. Ever the Democrats would have to have 60 members in the Senate and make sure that not a single one of them broke ranks. That’s not going to happen. That’s not a possibility. There’s literally no way at this point to legislatively prevent Donald Trump from running for president. Again. Now, if he is under indictment in New York, following his term in office, that might prevent him from running, you know, being in jail could do that. I don’t think he’s going to end up in jail, but certainly a damaging investigation like that, a potential prosecution with some kind of plea deal absolutely is going to hurt us prospects, but folks, the best thing in the world that could happen for the democratic party is for Donald Trump to use inauguration day, to announce that he is running for president.

Again, the public is sick of him. His approval rating, since the election continues to decline, the more he is out there. And the more he is whining, the more he is complaining and crying and yelling on Twitter. The less people like him, him remaining in the public spotlight against our will is going to destroy him. If he runs for election, again, let him continue to go out there and shoot himself in the foot. Every time he opens his mouth, where’s the harm in that? There is a little bit of harm to be honest. And this is the obvious elephant in the room that we we do have to address in that is if he continues drumming up his angry base, they may kill somebody. That’s not an exaggeration or an overstatement either this past weekend. Uh, we saw them show up at Michigan secretary of state, Jocelyn Benson’s home with weapons to protest the certification of Michigan for Joe Biden, no shots were fired, but there were shots available.

That’s the fear. That’s the problem. That is the only reason we would want Donald Trump out of the spotlight, because if he goes away, he can’t gin up their hatred towards Democrats or liberals or democratic socialists and all of us on the left. That’s the threat. That’s the problem, him running for president. Again, I’m not worried about that. I do not think for a second, this man could ever win another election ever not to mention if Joe Biden comes into office and actually does something good, then he won’t win. Regardless like Joe Biden actually could control the whole thing. If he comes into office and says, all right, let’s, let’s get on to work on, uh, forgiving student loan debt right now, day one, let’s do this. You know, let’s put in place this Medicare for all who want it, uh, certainly not good enough, but that is going to help people. Not as many as Medicare for all would help, but it’s going to help some people. And if you start helping people, they’re less likely to say, let’s go back to the crazy guy. It’s that simple. So how about we stop worrying about Donald Trump running for office again? And we start worrying about the conditions that led to Trump in the first place and the fact that we know how to fix it so far, not looking like we are though. That is the real problem.