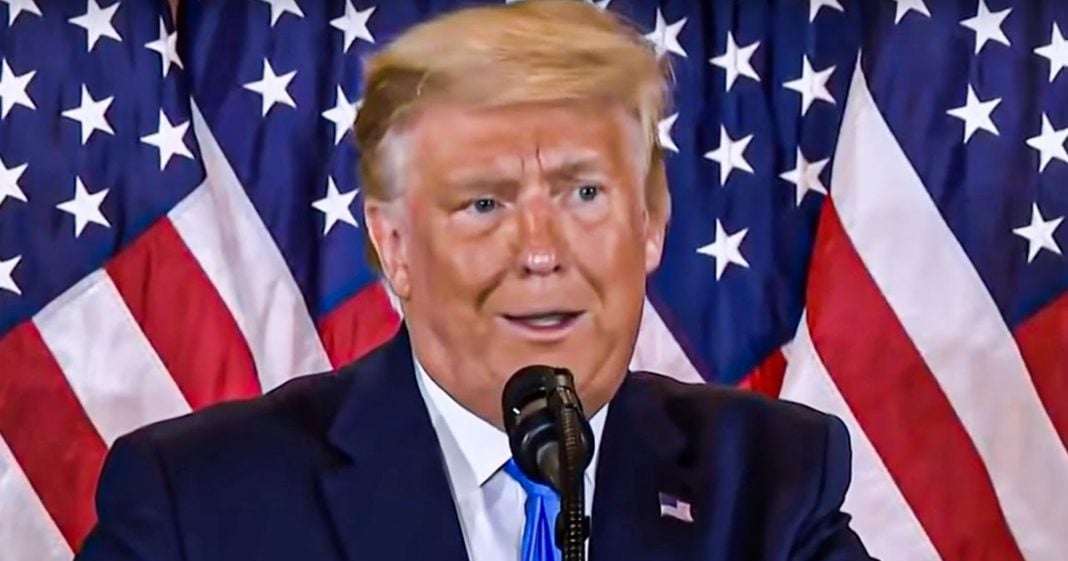 After the Washington Post reported that 25 Republicans in Congress admit that Biden won the election, Trump tweeted out that he wants the names of these individuals. It isn’t clear why he wants their names, but the most likely reason is because he wants to try to publicly shame them on Twitter. Ring of Fire’s Farron Cousins explains what’s happening.

On Saturday, Donald Trump attempted to, uh, I guess you would call it tweet through the tears. After he tried to put on a brave face when the Washington post reported that there were as many as 25 Republicans in both the house and Senate combined, who accept the fact that Joe And won the election and will be the next president of the United States. This didn’t sit well with Donald Trump. And so he tweeted out 25. Wow. I’m surprised there are so many, uh, we’ve just begun to fight. Please. Please send me a list of the 25 rhinos. I read the fake news, Washington post as little as possible. So he was like, Oh, send me their names. Who are they? Where are they? What are they doing right now? Who are these people? I must know. I have to track him down. Why, what are you going to do? Like for real, what are you going to do? I’m just at this point, because I am so sick of this, that this guy, you know, it’s almost like somebody’s talking a bunch of smack on a street corner and you’re just sitting there, you know, after you’ve left the bar night, what are you going to do? Really? What are you going to do?

And that is the attitude. Honestly, I think these Republicans need to start taking with this guy, what are you going to do? What are you going to do to me? Yeah. I wanted the 25, which by the way, the Washington post later, I had to come out and say, actually it was 26, not 25. We got it wrong. What are you going to do? What are you gonna attack me on Twitter? Oh dear. Oh, no, not a mean tweet. Oh no. You’re going to come up with some kind of silly little nickname for me. Oh dear folks who cares really Republican party, who cares? You’re letting this man just drag you straight down to hell and y’all think you’re going for a joy ride. Now don’t get me wrong. The Republican party is absolutely just horrible. I had really, you have no redeeming qualities whatsoever.

So I am glad that this man is absolutely destroying you, but just in general, as a human being, how do you not have it in you? Like how do you not have the response to fight back? What is wrong with you? Evolutionarily speaking, that you won’t fight back. You’re just going to sit there and take it and be like, Oh, I was one of the 26, but I don’t tell it my name. Just be like, yeah, I did. You know why? Because I can see the numbers because we’ve asked you for fraud and you won’t give it. If any of you actually had the courage to not mince words about it. And to actually go out there on a real platform, not just Twitter, go out there on Fox news and declare outright Trump lost it is time for the Republican party to move on so we can repair ourselves so we can prepare for 20, 24, let’s do this. He is allowed mouth moron. Let’s go.

That would shake a lot of his followers up that would shift the conversation a little bit more and it would make the country realize, Hey, maybe the Republican, party’s not dead. Maybe Trump is not going to destroy it, but none of you have the courage nor do you have the intelligence to do something like that. You know, I’m not worried about sitting here and giving you these great, wonderful ideas. Cause I know you’re not going to listen to them instead. You’re going to sit there. You’re going to be cowards because deep down and here’s the part. People forget, you believe the exact same things. Trump does. He hasn’t destroyed your party at all. He’s just exposed it for what it really is.