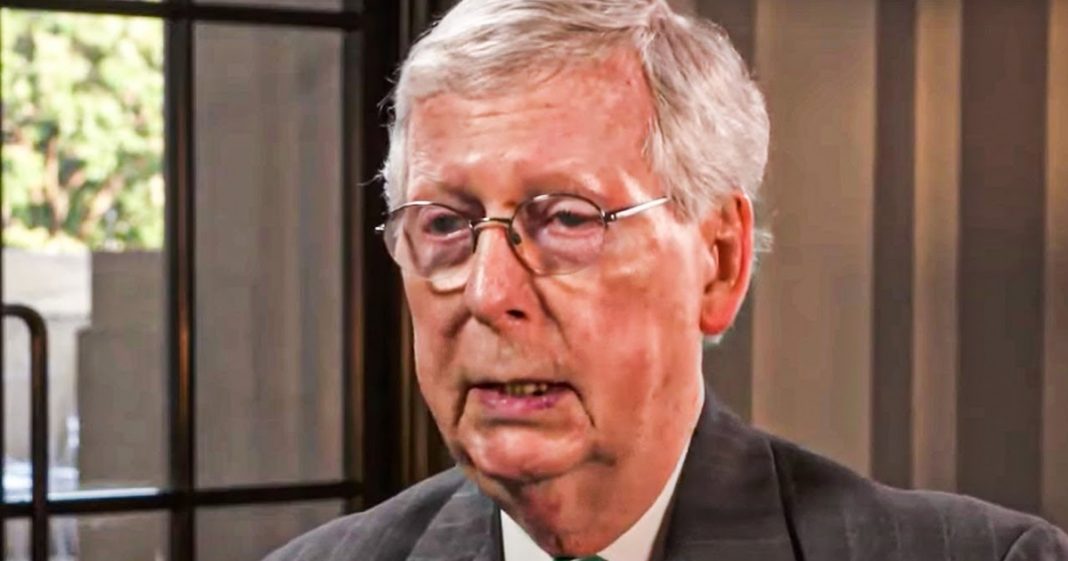 The media is putting pressure on Mitch McConnell to do the right thing and pass a much-needed stimulus package that helps American families instead of corporations, but the chances of that happening are close to zero. Everyone has to stop pretending that Mitch isn’t an absolute monster, and that he’s even capable of doing the right thing. He can’t and he won’t, and he really has no political reason to do so, as Ring of Fire’s Farron Cousins explains.

Well folks we have once again, kind of where we were just a couple months ago, hit a point where both savvy political pundits, uh, the, you know, kind of lobbyist consultant class, the media, and even democratic politicians believe that Mitch McConnell can somehow be shamed into doing the right thing. Here’s what happened on Friday, we got the latest jobs report, 245,000 jobs, uh, added very weak, far lower than expected. And so Newsweek, which I love, I use Newsweek all the time. They ran this headline. It said McConnell faces new pressure for big stimulus after grim unemployment report, really like I, I’m not even going to shame whoever wrote this article here, but come on. This is cheap. This is lazy. It’s lazy for anybody in that millionaire consulting class who goes on MSNBC all the time to go out there and say the pressure’s really on Mitch McConnell.

Folks, listen to me and listen to me very carefully. First and foremost, it ain’t just Mitch McConnell. I know he’s the biggest villain, but it’s not just him. Let’s not forget that this, uh, the end of last week, Nancy Pelosi came out and said, well, maybe we don’t need individual checks. Cause Joe Biden believes inside. It’s cool. 25% of American children are going hungry. They can’t eat science, they need food and they have to have money. Their parents have to have money to buy food. And yet you’re sitting there touting a stimulus package that doesn’t actually include stimulus for Americans. So whatever Mitch McConnell’s the villain, right? They’re all villains. But can we stop pretending that Mitch McConnell has a decent, uh, bone in his body that he has a conscience of any kind he’s never going to do the right thing. I’d have we learned nothing from the last few months?

Like, no, you can’t do a Supreme court justice in election year. Oh, he did it. Whoa. Who would have guessed? He’s an. And he has been his whole life. He is absolutely the most evil son of a serving in Washington DC right now. And that says a lot because most of them are, but Mitch McConnell is the worst of the worst. And there is no way on this planet that you could shame him or pressure him into wanting to pass a decent stimulus. That’s actually going to help American citizens. And do you know why? Because it’s not politically expedient for him to do that. He gets nothing out of it. Nothing. He just got reelected. He’s got six more years before he has to worry about that. He has four years before another presidential election where a Republican have a shot. If the Republicans are doing what they’re supposed to, they, he has nothing.

He has nothing to fight for right now. He’s not worried about the state of Georgia. He’s not worried about those Senate runoffs. There’s two races. Republicans only have to win one to maintain their majority. That’s it? Mitch. McConnell’s got it made in the shade folks. In fact, probably doesn’t even ever have to worry about another reelection because of his age. Let’s be honest. The dude’s done. He’s not going to compromise. He’s not going, gonna be visited by three ghosts in the coming weeks and wake up and say, God bless us. Every not going to happen. Folks, Mitch McConnell is pure. Evil. Always has been, always will be stop with the headline saying, Oh, Mitch, McConnell’s under all this pressure to be good for once it will never happen.