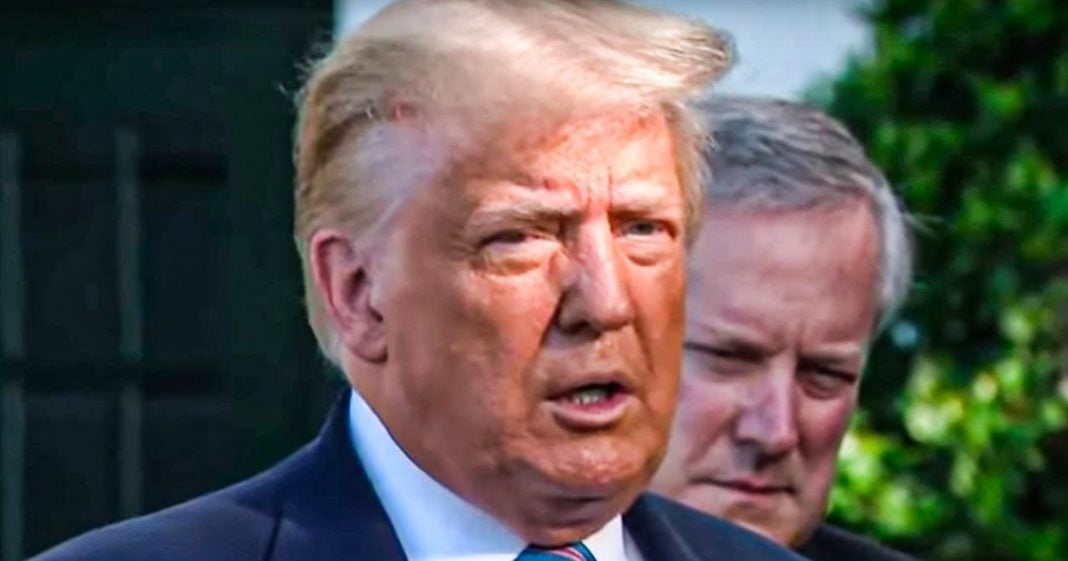 The New York Times reported recently that Donald Trump has grown incredibly depressed and despondent, and that he is completely refusing to do any work that isn’t directly related to his election fraud lawsuits. This isn’t the worst thing right now, considering the few things he’s done since the election include pondering whether or not to start a new war with Iran. Ring of Fire’s Farron Cousins explains what’s happening.

According to a recent report from the New York times, Donald Trump, according to those around him is very depressed. He is depressed about the fact that he lost the 20, 20 presidential election. And no matter what kind of brave face he puts on for the public, no matter what kind of nonsense he puts out on Twitter, he knows he’s not going to be president anymore. He knows that everything beyond that is just a grift, but see here’s the problem. And this report spells it out very clearly. Staffers also say, he’s not working. In fact, he really hasn’t worked at all since the election ended. We have a president of the United States, but we really don’t have anybody in charge kind of, you know, doing things. But to be honest folks, that’s not bad. I would take that over Donald Trump actually working right now because what has he done?

Like what are the few things this guy has actually done since the election ended? He hasn’t given us any more stimulus. He hasn’t cared about the economy. He hasn’t done anything with regards to the pandemic. He’s pardoned a bunch of, uh a-holes and he’s almost gone to war with Iran. Yeah, I’m cool. If he doesn’t work anymore, like, you know what you’re done, you’re done your not going to do anything decent anyway. Oh, he also, I think nominated a couple of judges that Mitch McConnell did, uh, call the Senate back and got approved. So he did that. So he packed the courts. He pardoned his friends and almost took us to another war. Stop working. I am okay with it now. And again, I’ve said this before. I, I said during his administration, when we’d get the reports that he’s not working, he’s not doing much.

I would say, no, you have to, you have to be present. You have to do something I’m over that. Now we’ve seen what happens when you do something. So now please do nothing. Sit and be depressed, sit and think about what life is going to be like down at Mar-a-Lago when you moved there in January. I’m sure it’s lovely. This time of year South Florida is always pretty nice in the winter time. You’ve got nice tempered breezes, not too hot, not too cold, you know, just nice, wonderful place to retire. Uh, but in terms of actually doing work, you know, uh, changing things in this country, please don’t, you know, um, Oh, another thing he’s been doing by the way is he’s been packing the Pentagon with his cronies. So that’s horrible. So again, just stop working. We’re all okay with that. And I think we all need to be okay with that.

And perhaps we all need to let him know that we’re okay with that. Maybe send them a little tweet and say, Hey bud, I know you’re sad. Why don’t you just take the next two months off and you know, enjoy Christmas and new year’s I’m sure you’re going to have a new year’s party. Uh, I probably going to have another couple of Christmas parties, you know, host these super spreader events with your idiotic friends. Uh, but in terms of actually working, don’t even worry about that. We got it covered. We’re good. We don’t need anything from you. If a stimulus package does come in front of you, just sign it real quick. We’re good with that. Um, and be done. That’s it. We don’t need anything from you want anything from you. We just want you to go away LA. So why don’t you get a headstart on that now?