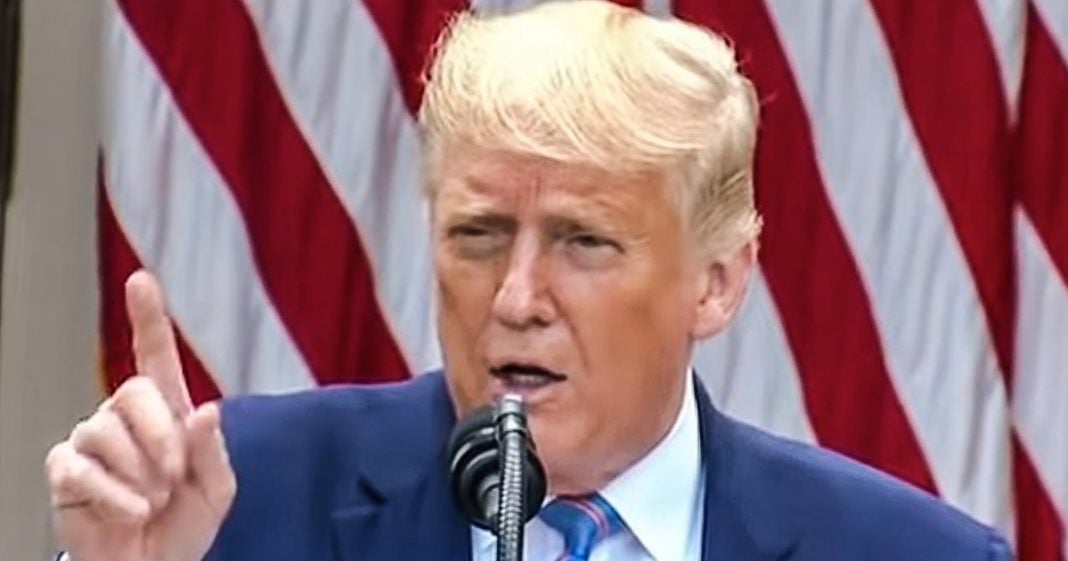 Donald Trump has officially had it with Fox News, and he recently tweeted out that the network was “unwatchable” and then told his cult members to go tune into other networks like Newsmax and OANN. Those networks are nothing more than pro-Trump propaganda outlets, not that Fox is much different, and they will have a hard time competing in an over-crowded, fact-free conservative media market. Ring of Fire’s Farron Cousins explains what’s happening.

This past weekend, Donald Trump took to Twitter, uh, seemingly out of nowhere, to be honest. And he told His followers, his cult to no longer get their information from Fox news. The network is in fact unwatchable and that they need to move on to other outlets like Newsmax or the one America news network. Here is the tweet that Trump sit down Fox news day. Time is virtually unwatchable, especially during the weekends watch own or Newsmax or almost anything else. You won’t have to suffer through endless interviews with Democrats and even worse. Okay. I’m not sure that that the end of that sentence is actually how, how you wanted the sense to, I don’t know. Um, but yes, God forbid people hear from Democrats.

I mean, half the country supports those people, but sure. Let’s just cut them out of the conversation completely. Right. That’s ridiculous. I mean, you don’t hear liberals going out there and saying, it, CNN and MSNBC, you stop putting Republicans on, even though CNN is not trust me a liberal network, uh, they’re more in the center MSNBC. Sure. They’re, they’re very Democrat, but they still bring on Republicans. And nobody’s saying to stop doing that certain ones. Yeah. We’ve absolutely said stop putting this person on like Kellyanne Conway, you know, these attention seekers who just come there to lie. Sure. Get rid of them. But the other ones, the people who actually matter, no, nobody said stop putting them on TV. Trump has openly calling for censorship here. You know, that thing that Republicans hate so much that they had to create their own version of Twitter. Yeah. That’s what your dude’s doing. He’s saying don’t watch Fox. They’re bad because sometimes the Democrat is just be cool. You work folks. This is the culmination of a fight with Fox news that Donald Trump has been waging for a long, long time. This is a fight. He has been fighting more viciously and longer than he’s been fighting coronavirus back in may Donald Trump tweeted Fox news is no longer the same. We miss the great Roger Ailes.

You have more anti-Trump people by far than ever before Looking for a new outlet. And of course you had these outlets, like the one America news network Newsmax, you know, they have popped up, uh, in last year or so, I guess, uh, and they’ve really taken the president’s attention. You know, he loves them because they, unlike Fox news will absolutely not ever accidentally let a real piece of news slip because they’re not actually news outlets, even though both of them have news in their, in their names. Their, uh, Newsmax CEO actually recently went on a peacock with many Hassan and said, Hey, yeah, you know, we say things that aren’t true sometimes, but that’s because we’re only opinion shows these aren’t news shows, but here’s the best part. Folks do know what’s going to happen. We have an oversaturation already, as it is with conservative media outlets, there are more conservative people out there than is sustainable. There’s not enough hours in the day for individuals to tune into all of these conservatives. But each one of them is very well-funded. You know, from Charlie Kirk to Newsmax to own to Fox news, you’ve got millionaires and billionaires pouring tons and tons and tons of money into these outlets.

And eventually some of them are going to have to come crashing down to the ground. That is basic economics for us. There is an oversaturation the supply exceeds the demand. So now what, well, if we remember our, uh, macro economics, we sit back and wait, watch as they start to fall watch, as they start to compete with one another. That’s when things are going to get fun and Trump’s already exacerbating these fights, pitting Fox news against the other two, directing people towards the other two, increasing the scrutiny on those other two and making other people think that, Hey, if I go out there and start kissing this dudes behind in on Twitter, maybe I’ll get the shout out to this doesn’t end well, but mostly it doesn’t end well for the American public. These are not reputable news organizations. These are not organizations that are out there telling the truth, even when it doesn’t benefit them.

No, these are propaganda outlets who solely exists right now to verbally pholate Donald Trump. So once he’s out of office, these are going to be the networks that go out there every day and say crazy things like, Hey communist, China’s pulling the strings on Joe Biden. You know, they’re trying to do their own version of the red scare instead of Russia gate it’s China gate. And we’re going to listen to it for four fricking years from these outlets, as they slowly, slowly watch their numbers go because there’s too many crazy right-wing talkers out there. And each one of them is competing for an ever dwindling audience.