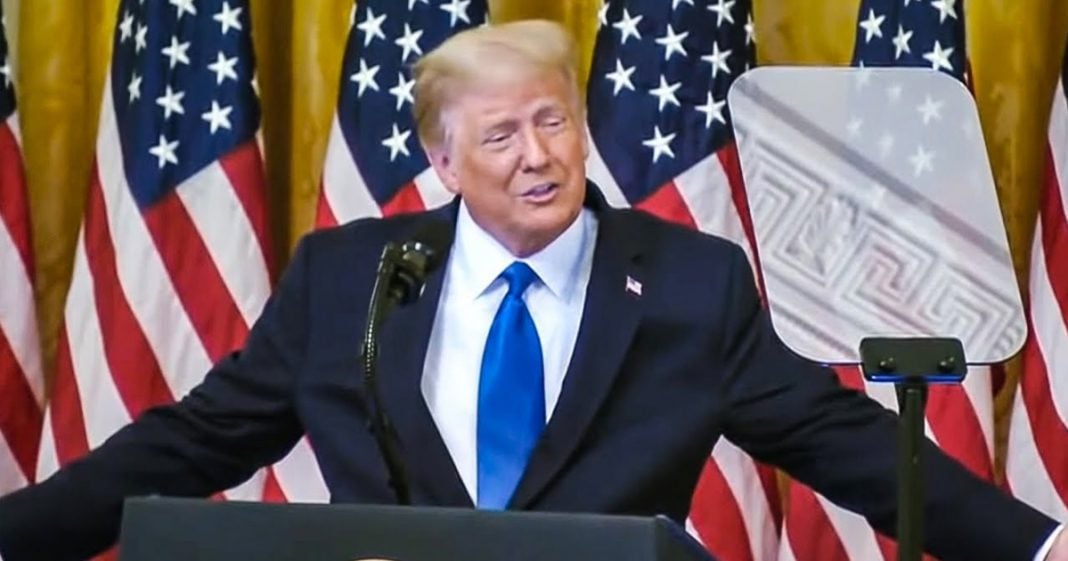 Donald Trump apparently has the mentality that if he goes down, everyone is coming with him. And after four years of enabling his horrendous behavior, the Republican Party is finding out that he’s not going to leave office without dragging them all down with him. This was entirely predictable, and that Party absolutely deserves what is coming to them. Ring of Fire’s Farron Cousins explains what’s happening.

Now that it’s very obvious to most people in this country that Donald Trump does not have a chance in hell of remaining president. Uh, Trump is determined to go ahead and just take the rest of the Republican party down with him. Here’s what’s happening earlier this week, Donald Trump retweeted a conservative commentator by the name of car mine mindset. Sabya who said the following? Why bother voting for Republicans? If what you get is Doug Doocy and Brian Kim, uh, referring to the Republicans down there in Georgia who were refusing to break the law in order to give Donald Trump the state of Georgia. Um, so because they won’t broke the break, the law, nobody should vote for Republicans anymore. You know what I’m sold? I’m sold, never voting for another Republican. Again, don’t worry about that. Uh, for the record folks, I’ve literally never voted for a Republican and I’m in a very Republican area where we typically have several Republicans for some offices running unopposed.

And in those races, I always write in either a, my mother’s name or my name, actually, I also, uh, this year wrote in Mike Papantonio, his name for several of them. So even if their only choices are Republican, I will literally find a way to not vote for a Republican. Doesn’t mean I always vote Democrat either. It just means I never vote Republican, but either, well, that’s a little bit about me that nobody needed to know, but now you do. And anyway, what we have here is Donald Trump saying to hell with every one of you, even though you have been complicit in everything I have done over the last four years, even though you have bent over backwards to give me everything I have wanted up to this point, because you deny me one time, time it’s over and I’m going to destroy you all.

Uh, they’re probably going to go and become Democrats. The hardcore people who say, not only do we love tax cuts and corporate pollution, but we’re also racist. That’s going to be the new Republican party. That’s going to be the Trump party. And that’s terrifying. So you get a democratic party. That’s going to be moved further to the right. Then you have a far right party and you’ve got no amalgam on the far left, even though that is where most of the beliefs of individual Americans sit, that’s where we’re headed. And Trump is the one who put us there and Democrats refusing to take a hard stand on the left, have helped out a little bit, mostly it’s Republicans though. So don’t get me wrong about that. And Trump has hell bent on making sure that the current incarnation of the Republican party does not survive once he leaves office.