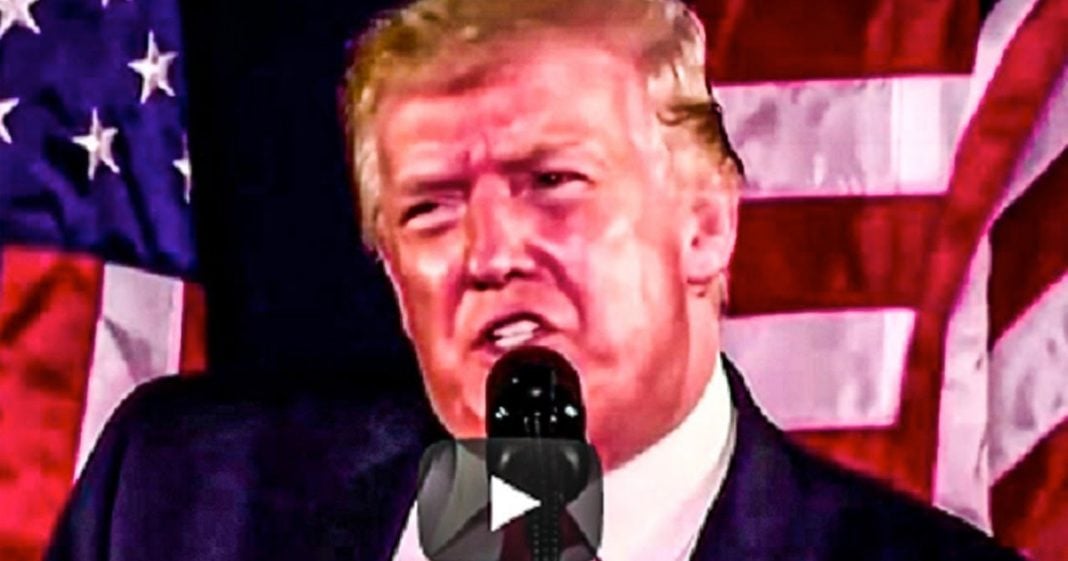 Republicans in Georgia began sounding the alarm bells this week, warning that Trump’s rhetoric with regards to the election and the non-existent voter fraud were going to get people killed. Election workers have already been threatened by crazed Trump supporters, and Trump hasn’t relented in his attacks, even after the state certified the vote totals. Ring of Fire’s Farron Cousins discusses this.

Earlier this week, a Georgia election official by the name of Gabriel Sterling came out, actually held a little press conference where he called out Donald Trump for his refusal to tell his rabid Bay To knock it off, Essentially knock it off with death threats. Here’s what Mr. Sherman had to say. This has to stop. Someone is going to get hurt. Someone’s going to get shot. Someone’s going to get killed and it’s not right. It’s not right. It has to stop. Mr. President, you have not condemned these actions or this language senators. You have not condemned this language or these actions. This has to stop. We need you to step up. And if you take a position of leadership, show some Georgia Controlled by Republicans in case people for God and what’s happening right now is that election officials in Georgia, just as we have seen happen in other States in recent weeks, they’re getting death threats from craze, Donald Trump Fans, his cult Members, because that is 100% what they are, are threatening to murder election workers in the state of Georgia because Trump didn’t win.

These people are psychotic. They’re deranged. They need to be deprogrammed and they need to be removed from polite society until they are deprogrammed because yes, they’re going to get somebody killed. We have seen them do it before Trump fans killing people is not something that hasn’t happened in this country. I mean, we’ve seen it. We have seen his psychotic followers, load up vans with ammunition and try to make it into CNN to start killing reporters who just, aren’t nice To Trump. These People are deranged and they’re little cult leader. Donald Trump knows this. That’s why he’s making these claims. That’s why he’s going as well as why he did the Georgia rally. That’s the point of all of this. He needs the chaos. He wants the chaos. He wants the violence. He wants bloodshed because he believes that is the only way he can be successful and he can make his Mark. He wants people to see others going out there and Trump martyrs. That’s what he wants.

That’s all he has left. But I do like the fact that Mr. Sterling here pointed out that it’s not just Trump, who hasn’t condemned this, where are you at other Republicans? Where are you? If you’re in a position of leadership, act like it, come out and say that this has to stop. Stop cowering behind a Twitter feed. Stop hiding from the reality of what’s happening in your own party and do the right thing and say enough is enough. Get the hell out of my party. You know, you know, the Senate right now could actually invoke the 25th amendment and just get Trump out of office today. It could be done, but they won’t because they’re cowards. They have the majority and you obviously know the Democrats would go along with it. You could easily find enough members of the administration and the cabinet positions to go along with this. And then, Hey, suddenly this is over and we don’t have to worry about it for the next month and a half. We don’t have to worry about the murders or maybe we do. I don’t know. I don’t know how psychotic has crazed followers are going to go.

If we remove him from Office, this was always the threat. You know, the threat of Donald Trump actually overturning the election was non-existent. But the Threat of his supporters doing horrendous things like what they’re threatening to do, Georgia, that was the thing That needed to be taken seriously. And we are the left is the people in Georgia are the people in Arizona who got the same kind of threats. They’re they’re taking it seriously. The only people who aren’t are elected Republicans outside of the state of Georgia, they’re silent, they are cowards. And that needs To be remembered by everyone forever.