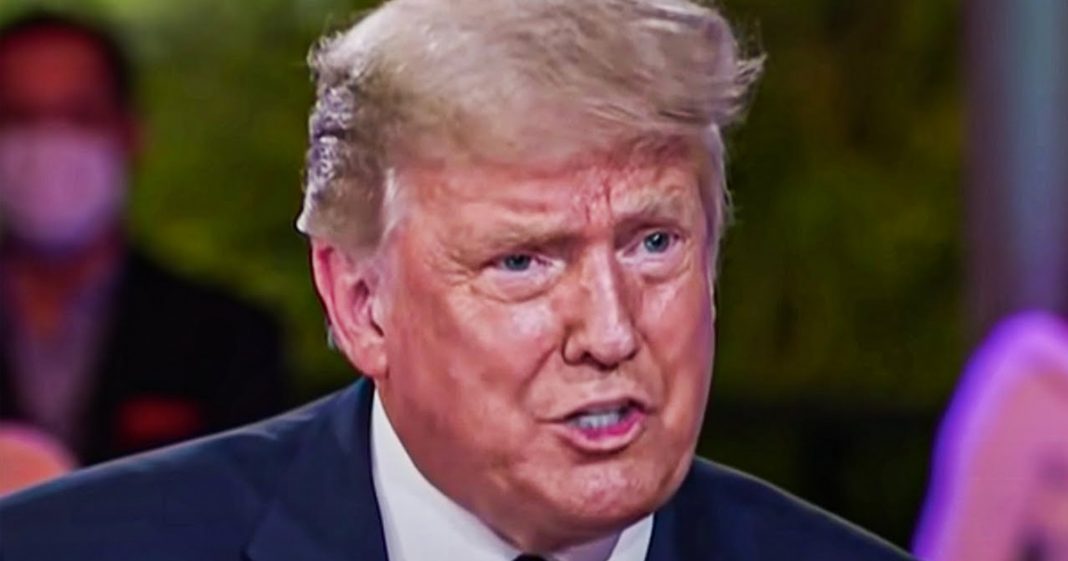 During a White House super-spreader event disguised as a holiday party, Donald Trump told his friends in attendance that he would like to remain president for the next four years, but if that fails, he will see them all again in 4 years. Now this announcement effectively means nothing, as the President isn’t exactly someone known for telling the truth, but it does at least confirm that the idea is not out of the realm of possibility. Ring of Fire’s Farron Cousins explains what’s happening.

He has teased it out. He has had these discussions with those clothes. Let’s do him. And all of this means nothing. Just so we’re all on the same page. Folks, the man who told 23,000 lies since the day he was sworn in. Even if he’s telling people I’m going to ruin again, I’m going to do it. I’m going to put my name on it. It doesn’t mean anything. This man’s word is worthless. Absolutely completely and utterly worth less. No stock in what this man says right now, is he going to run his and he, that’s what he wants the conversation to be. He wants the conversation, the media spotlight to focus on him. And that’s the best possible thing for the Democrats right now. I know that sounds counterproductive, right? But think of it this way. And I’ve explained this multiple times, and I guess this is going to have to be one of these points that I have to continue to hit on until it’s over.

Um, here’s the deal here’s what’s happening right now. Most of the public is sick of Donald Trump. All of his whining about the election being fraudulent, all of the lies from his legal team that everybody now knows are lies that has driven Donald Trump’s approval rating down, down, down since election day, it’s only going to get worse. So if this man wants to continue being out there, staying in the public spotlight, being the topic of discussion, that’s not going to go well for him. Joe Biden is coming into office at a time where luckily for him, uh, the vaccines are going to be ready to roll out. Most of them, some of them now this is going to be months and months and months of a process here. Don’t think that Joe, Biden’s getting sworn in on January 20th and that you’re going to have a vaccine in your body by Valentine’s day.

It’s crazy to live through so many of these events at such a young age, for some of us, you know, uh, nine 11, the great housing market crash, you know, the, the economic disaster, the election of the first African-American president, and now the election of the dumbest person on the planet and then the pandemic and all of that. Wow. We’ve lived through a lot of history just the last 20 years, but this is the kind of thing that sticks with people much like a nine 11 Biden coming in at a time where it’s all about to turn around, not because of what he did and certainly not because of what Trump did. Human ingenuity brains did. What’s happening here, but either way, it’s going to be good for Biden in bad for Trump. So Trump’s going to continue going out there. He wants to keep doing rallies.

And if he runs for president, he can have other people pay for his rallies. If not, he has to pay for them himself and that’s going to get expensive. So these rallies are going to be about him talking about how the vaccine is his, his baby, how he did so great with the pandemic, how everything was perfect under him. And it’s trash under Biden. And people are going to look around and say, we’ll hold up the last year of your presidency. I couldn’t even go see my parents on Thanksgiving. Now I’m eating at an indoor restaurant. You’re full of it. And that’s how all of that is connected. I know it seemed like I was going on a weird journey with that, but that’s the landing point. People will remember how crazy FDIC this last year of Trump’s presidency. She was so, and he goes out there and tells everybody how wonderful things were. This is what they will remember, because this is the kind of thing that will stick with us for the rest of our lives. And then that is never, ever, ever going to end well for Donald Trump.