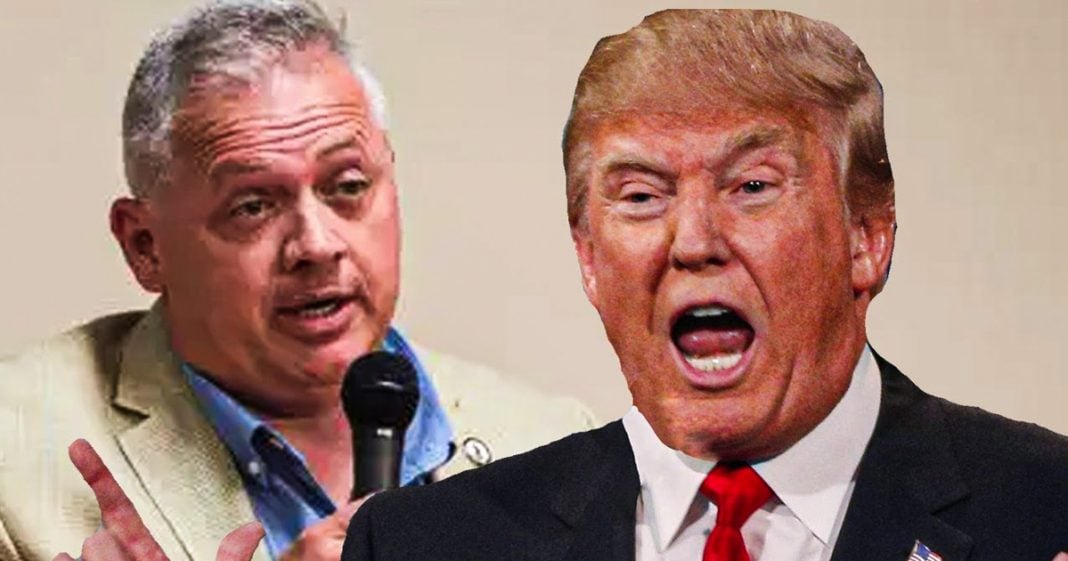 A Republican Congressman from Virginia is letting his party have it over their refusal to stand up to Trump and their willingness to go along with his lies about a rigged election. Rep. Denver Riggleman says that they are pulling off a “massive grift” by going along with Trump’s claims, and it could ultimately cost them their careers if they keep it up. Ring of Fire’s Farron Cousins explains what’s happening.

Earlier this week yet a, another Republican member of Congress openly spoke out about Donald Trump’s attempted theft of the 2020 election, but he wasn’t just calling out Trump either. He was calling out all of the grifter Republicans who are going right along with it, uh, that Republican representative, man, by the name of Denver Riggleman, which sounds like the most made up name ever. But no, it’s not representative Denver Riggleman is in fact, a real Republican Congressman from the state of Virginia. And Riggleman was completely candid in an interview earlier this week, or that came out earlier this week. I should say here’s some of the things he had to say about the Republicans who are letting Trump go on with his lies and actually reinforcing his lies for him. Here’s what he says. Uh, the party is just money-making for the 20, 24 election. And it’s completely unethical. They’re worried about committee assignments. They’re worried about the team. Um, what he means by that is that these Republicans who were playing ball going with what Trump is saying, they’re only doing it. Not because they actually believe that there was widespread election fraud. They’re doing it because they want to remain in the parties. Good graces.

And so that way they get it Better committee assignment, but here’s the catch. And he goes on to explain this, they’re actually destroying their career Because you see Trump’s not going to win. So what do you have to gain from sucking up To the dude that you know is going out The door. He’s not going to have any Sway over your party anymore. He’s not going to hold a position of power. So what the hell are you doing? In fact, Riggleman added. He gives I’m so sick of it. I’m sick of it. He’s right. We’re all sick of it. But he’s also right that these Republicans are pulling off a massive grift. Yes. They’re going to use this for fundraising in 2024. Yes. They are trying to cozy up to the Trump wing of the party and say, well, I defended him. You need to take care of me. Right? Um, the Trump wing of the party may or may not survive after he leaves office. That’s something that remains to be seen. Obviously only time will tell. But the other thing they’re doing is they’re trying to attract his base. And as long as they continue to do that, then yeah, the Trump wing of the party is going to be doing fine. But we have seen that in a Republicans recently, people like Ted Cruz, who is absolutely one of the most disgusting people with this sucking up to Trump’s base, claiming he has the legal right to do with this.

He can do this. He can do this, Ted. No, he does not actually nobody in this country, including the president himself has the legal right to file a knowingly fictitious lawsuit that is against the law. But that is what this man is doing. That is he’s having Rudy Giuliani do that is what Sidney Powell who may or may not be with the campaign who the hell knows that’s what she’s doing. You don’t have a right to do that, but you’re betting on that pro Trump base, not understanding how many Nothing works. That’s why you’re doing that. That’s why these other Republicans are doing that. They want that base for themselves. And As soon as they think they’ve got it on lockdown, they’re going to try to mold that base into either A Ted Cruz base into A Tom cotton base, whatever it is, but get Trump out of it and make them your own. So that way, if Trump runs again in 2024, that base is no longer there and you’ve already brainwashed them to believe in you And not in him. And then he’s finished. That’s what this is about. Watch. It will play out like this over the coming months and years, it won’t be pretty, but we know exactly what is happening and that gives us an advantage.