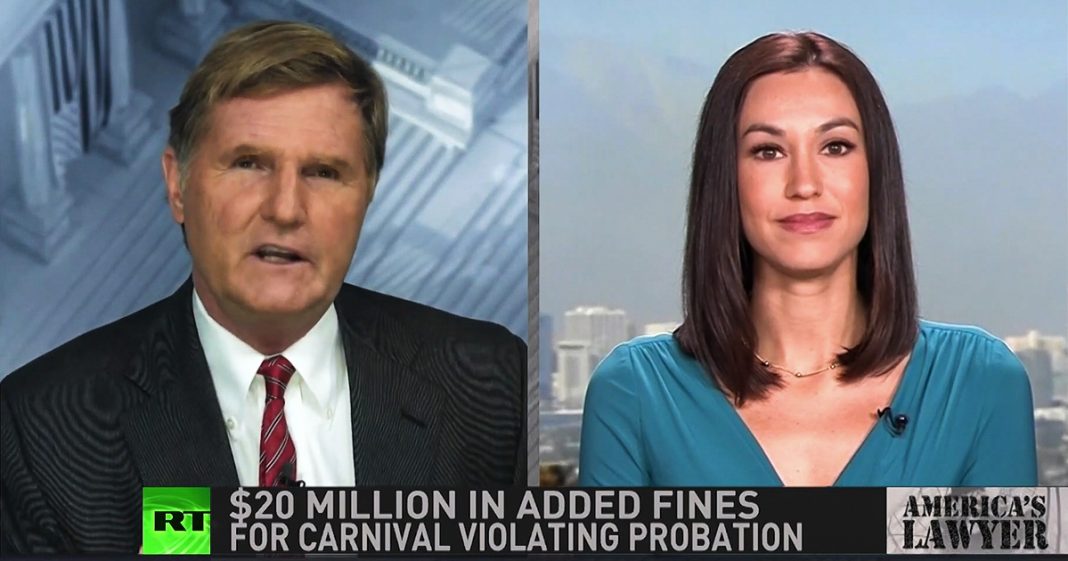 Via America’s Lawyer: Mike Papantonio is joined by RT correspondent Brigida Santos to walk us through the ongoing environmental fiasco with Carnival Cruise Lines, who is now being fined $20 million for again violating their probation set in 2017 for illegally dumping oil and toxic waste into the ocean. Plus, less than 24 hours after it was revealed that Facebook CEO, Mark Zuckerberg, was creating a new cryptocurrency called Libra, members of Congress immediately began calling for hearings on the issue. Mike Papantonio explains more.

Mike Papantonio:             The world’s largest cruise company has pleaded guilty to violating the terms of it’s probation, just two years after it was found purely guilty of environmental crimes. Talking about environmental crimes, not civil issues. The Carnival Corporation now has to pay $20 million in fines in addition to a $40 million settlement. RT’s Brigida Santos has the story from Los Angeles.

Brigida, you know, we, we’ve watched this Carnival story develop over the years and we go, well, you know, they’re going to get it at some, at some point they’re going to understand it’s not economic, it’s not economically feasible to continue breaking the law. Why was the Carnival placed on probation to begin with and how did they violate that sentence of probation?

Brigida Santos:                   Yeah. Mike so Carnival was placed on five years of probation in April of 2017 for illegally dumping oil contaminated waste in the ocean. Now, it tried to cover up that scheme for about eight years, but it was eventually caught and the company agreed to pay a $40 million settlement, which is the largest settlement for environmental crimes in US history. But still that punishment did very little to curb Carnivals criminal ways.

And now the company has pleaded guilty to six counts of violating it’s probation. According to the Department of Justice, the violations include deliberately deceiving and undermining the court’s ability to independently inspect ships, falsifying training records, and purposely dumping plastic in Bahamian and waters.

Mike Papantonio:             Okay, let me roll this by you. I mean this, everybody’s gotta be thinking about this. So you got a bunch of garbage in your backyard. You want to get rid of it. It’s, you know, you don’t want to take it to the dump because it’s going to cost you money to do it right. So you load it up in your boat and you drive out into the bay and you dump all the garbage in the bay. Now, chances are you’re not just going to get fined, you’re going to go to jail. But we have this double standard to where some cat is dressed up in an Armani suit.

He’s got a Rolex Watch, drives a Bentley, he’s got an MBA from Yale, and all of a sudden we treat them differently than what would happen if your neighbor came next door and started saying, hey, I want to dump my garbage in your yard, because this is our yard we’re talking about. What is your take on that double standard? This, this isn’t obviously, isn’t, isn’t Carnivals first conviction because they’re already on probation, but just you see how we’ve talked about stories like this time and time again, Brigida, and the same theme is there, if you got money, you don’t go to jail. What’s your take?

You know, this is the world’s largest cruise company. It owns a 105 ships and it reportedly profited over $3 billion in 2018. So when these little fines seemingly compared to how much they actually make are slapped on them, the company has very, very little incentive to change its ways because they know that they can get away with these crimes.

Mike Papantonio:             Brigida, I remember you and I talking one time about the idea that these big companies build this into their business plan. Okay. They say how, how, how many times can we get away with this? And if we get away with it x number of times and then we do the math, then it’s worth it for us to pay a $40 million fine. Because we’ve basically dumped our garbage in, you know, in the ocean. We’ve dumped it in, in public commons, whatever it is, they’ve externalized all of their costs.

They’ve externalized and put it back on us as taxpayers, figuring out how to, how to clean the garbage up out of the ocean. And I’m wondering the first time, are there other items in the current settlement that they’re, you know, that I guess they’re going to violate, it’s just a matter of when. Are there other terms in the current settlement that’ll force carnival to shape up or change anything they do? How’s this going to be any different from the times they lied us already?

Brigida Santos:                   That’s a great question. Now, in addition to that, $20 million fine for this set of violations, Carnival will also be subject to additional oversight by, by a court appointed monitor for the remainder of the probation. But of course that didn’t work before. So most importantly, this time, the company’s CEO, Arnold Donald must also accept management’s responsibility for probation violations. Now, this is great because the company has been historically trying to blame these lower level employees saying that they haven’t been properly trained. They don’t know any better, but that’s obviously not the case. And the judge actually took this very seriously.

The judge ordered the company’s executives into court for these proceedings and basically look them in the eye and made sure that they understood that they are the face of the company. They are responsible for these actions. And the judge is also had threatened to ban Carnival ships from docking in the United States. So we’re finally going to see the people running the company facing legal scrutiny. But of course it’s unclear how many of these terms are going to be enforced and whether they’re actually going to shape up this time.

Mike Papantonio:             I think it’s an Israeli company, maybe it’s European, but it has context well outside of the United States. And sometimes the only, the only solution is the death penalty for the company. And I mean were, we’re willing to do that for, you know, if you consider the damage here, the death penalty for the company. And say, you know what? We tried. You wouldn’t listen to us. You lied to us. Your criminal conduct is just overwhelming.

So you know what? We’re going to shut you down. Sometimes that is the only way that you can get through to these thugs. So anyway, Brigida, thank you for joining me. You know, let’s pick up on this story again. I want to see where this story goes and see how serious this judge is about treating these criminals the same way we treat criminals that maybe don’t have billions of dollars. Thank you for joining me, Brigida.

And finally tonight, some good news. Less than 24 hours after it was revealed that Facebook CEO, Mark Zuckerberg, was creating a new cryptocurrency called Libra, members of Congress immediately began calling for hearings on the issue. You think it might be time? Yeah. Zuckerberg has been reaching out to banks and other companies to fund his new project asking for $10 million a piece to become part of it, and his plan is to create a new currency that’s going to be accepted around the globe according to Zuckerberg. He is way out there on this, but finally, people are paying attention.

Needless to say, Congress isn’t excited about the idea of Mark Zuckerberg and Facebook controlling global currency and they want to put the brakes on this plan before it even gets rolling. Facebook’s power needs to be broken down. It’s dangerous. It simply is dangerous. It doesn’t need to be built up, and if we allow them to create their own form of currency, you can kiss any hope of breaking up tech giants like Facebook goodbye. Hopefully Congress actually does their job here and prevents this from becoming a tragic, tragic reality in the big picture because it will snowball worse and worse and worse.