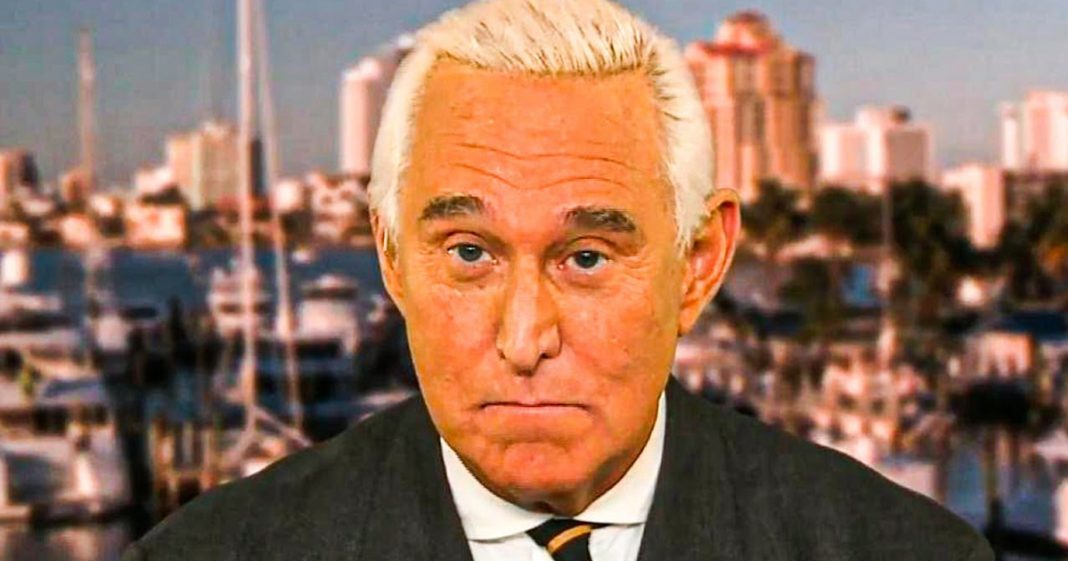 The people out there defending Donald Trump’s claims of voter fraud (and just defending the President, in general) have hit new levels of stupid that had previously seemed unreachable. Roger Stone, Trump’s longtime associate, said this week that there is “evidence” that North Korea delivered fake ballots by boat through a port in Maine. Stone has clearly never looked at a map, but that’s the least of our concerns right now. Ring of Fire’s Farron Cousins discusses this.

Donald Trump’s closest friends and allies are, I guess you would call it collectively losing their minds right now they’re doing everything possible and digging as deep into that conspiracy theory. Well, as humanly possible to convince the public that Donald Trump had the election stolen from right under his nose, the latest is convicted felon, Roger Stone, who appeared on the Alex Jones program earlier this week, where he laid out what might be the most bizarre conspiracy theory related to election theft. And keep in mind, we have already had a conspiracy theory that Hugo Chavez is ghost somehow conspired with George Soros and the Clinton foundation and communists from Serbia to steal the election. Roger Stone may have, may have out done all of that. Here’s what he said. Word for word from Roger Stone. I just learned of absolute incontrovertible evidence of North Korean boats, delivering ballots through a Harbor in Maine, the state of Maine. If this checks out, if law enforcement looked into that and it turned out to be true, it would be proof of foreign involvement in the election.

Has Roger Stone ever seen a map? I’m just, I’m just wondering. I mean, let’s say for a moment North Korea did this, um, do you know where North Korea is? Do you know that there is essentially an entire continent? No matter which way you go. Uh, there are several continents, uh, but there is at minimum one full continent in between North Korea and the state of Maine. And that continent is obviously North America. So for this, for this conspiracy theory to, to work out, North Korea would have to send a boat. They’d have to travel down the Pacific and now you think, Oh, well they go through the Panama canal, but no, no, no, no, no folks, you have to be covert. Everything that goes through the Panama canal is documented and checked and you have to pay a fee. So no, no, no, no, no. They would not go through the Panama canal. They would in fact half to go all the way around the Southern tip of South America. So now they are circumventing two continents and then you go into the Atlantic and all the way up the coast of South America, the coast of North America, you know, past countless military ships, military bases that we keep on the shores there all the way up to the tip top of Maine, where you get out of the boat and you say, here’s your fake ballots? I got to go long trip.

Yeah. Not even trying with these conspiracy theories anymore, to be honest folks for real North Korea, North Korea is friends with Donald Trump. They want him in office. They would not send a boat thousands and, and thousands of miles out of the way to deliver counterfeit ballots to Maine, Maine of all places. Come on, Roger. You could have said that they had an Antifa boat waiting up in, uh, Seattle, you know, right there in the Harbor. Oh. And then Antifa, you know, met with the North Koreans out there at sea. And then they sent the documents. I mean, come on there there’s much more plausible ways to make that particular conspiracy theory work while still using all of the conservative buzzwords. You know, at least Sidney Powell had the bud buzzwords in there, you know, Hugo Chavez, uh, George Soros, uh, Clinton foundation, communist China. You’re not even trying Roger. I mean, is that what prison does the masons where you just can’t even come up with a cogent conspiracy theory anymore? Whatever the case we are watching in real time, as all of Donald Trump’s friends collectively go in, And these are the best and brightest that he has defending him. So keep in mind folks, if you’re watching this and you still happen to be a Trump supporter, those are the people on your side. And that is how their brain works. Is that really what you want to be associated with may want to think long and hard about that one.