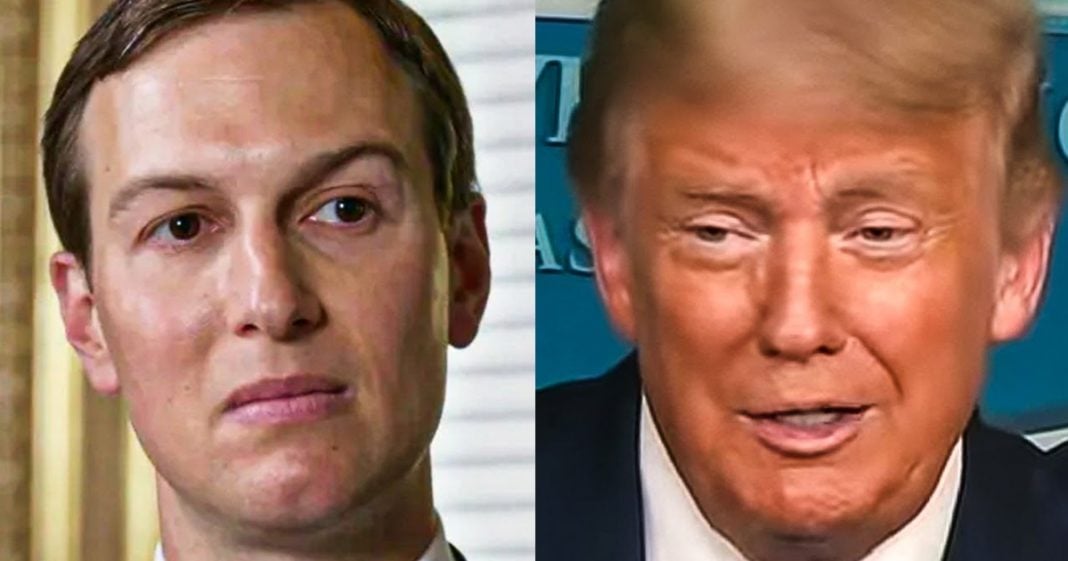 The Trump Organization and Kushner Companies both ended up taking advantage of the PPP Loan program established by the CARES Act, as companies on their properties took in more than $3 million from the program. This is money that was supposed to help small businesses stay afloat during the pandemic, but it became a feeding trough for corporate pigs who are too greedy to continue to exist. Ring of Fire’s Farron Cousins discusses this.

According to a new analysis by NBC news, both Donald Trump and Jared Cushner and the respective companies associated with them. The Trump organization and Cushner companies benefited from more than $3 million in the paycheck protection program loans, the PPP loans, uh, that were part of the cares act. And the way they did this is that businesses on properties that they own. So these are businesses that pay rent to Trump and Cushner, uh, every month received more than $3 million in loans. Okay, well, you’re saying, but Farrah and these are businesses that need to stay open. They employ people, they needed this money to save jobs. Uh, that is true, but they didn’t say of jobs. Some of them shut down completely without ever spending any of that money. Others took the money and still cut the jobs. So the money didn’t really change anything other than the number of people who were employed there. So yeah, they took the money. They didn’t do what they were supposed to do with the money, but Trump and Cushner still ended up benefiting from it because that’s the way this stupid program was designed.

I don’t understand how it is so fricking hard for us, other people to not get what’s happening here. The PPP loans were never about actually helping small businesses. You know, as the report said yesterday, more than half of the money, more than half of the $522 billion that was available for loans, more than half of it went to major corporations, they use tricks and schemes and scams to get their hands on the money. And some of them, once they got busted for it, did pay it back, but they had already gotten it first. They just wanted to see if they could to see if anybody would notice them. When somebody noticed they were like, Oh no, I had this $10 million. Get here. You take that out. I don’t even like that. That’s the way this program was designed. It was designed with flaws and loopholes for a reason, not to make it easier for mom and pop or the little boutique of the little restaurant on your corner to survive.

No, but to make it so that companies like shake shack could come in and take advantage of it. And that major multi-billion dollar hotel chains could take advantage. Got it. And they did all of them. That that’s what this program was about. And now we’re finding out that even Trump and Cushner benefited from this and the companies that took those loans didn’t even save any jobs. But Trump and Kushner got paid. The owners of these businesses got paid. It’s just the small businesses that are struggling, right? It’s just the average American family out there. That’s wondering how they’re going to keep putting food on the table because they don’t have an income anymore because, because their employer took these loans, but then did nothing to actually save their jobs. This crisis has not only revealed how little our government regards human life here in the United States, but it also reveals the links to which they will go to make sure that we continue to live with a boot on our neck. Like they have gone out of their way to hurt us during this pandemic and have been openly flaunting the fact that they have given billions of dollars to people who already have billions of dollars.

I don’t know what we need to do with that information yet, but I’m pretty sure that’s the kind of thing that really needs to stick with people. When you need to remember for that, we can either vote these people out, or we can continue to live like this, or we do what the founding fathers did and say to hell with it. We’re sick of this oppression, right? I don’t think it’s going to come to that nor should it. But I do think what needs to happen is we need to vote out every single one of these individuals. Who’s on the side of the corporations instead of the people and yeah, that only leave about seven or eight incumbents in the house and maybe two in the Senate, but who cares, burn it all down and start over. And we do that by voting out every single one of these, the longer you support these corrupting, cumbents the more you’re supporting the system that is intentionally designed to hold you down.