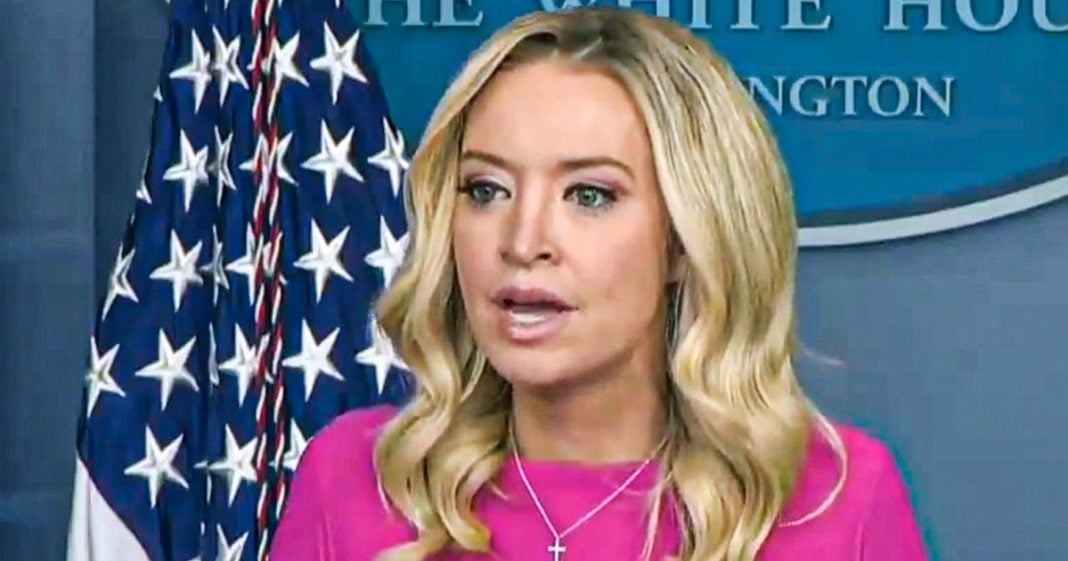 During a press briefing this week, Kayleigh McEnany once again sang the unwarranted praises of Donald Trump, and said that his prowess as a businessman is why the vaccine is about to be ready to rollout in record time. She then said that it is the “Trump vaccine.” I’m sure most of America would love to have a “Trump vaccine”, but the reality is that the COVID vaccine is not because of Trump, and he deserves no credit for the development of it. Ring of Fire’s Farron Cousins discusses this.

According to white house, press secretary Kaleigh McEnany there was only one person in this country who deserves credit for the fact that the Corona virus vaccines, uh, are coming along at an absolutely unprecedented rate. Uh, in the past, the earliest vaccine had ever made it from development to implementation was four years. Typically they take 10 years. This one’s going to be coming out right at about a year. Uh, after this virus was first, uh, prevalent in a human population and Kaleigh McEnany yesterday during a press briefing said that the credit lay not with the scientists, it lays not with the taxpayers who funded the research. No ladies and gentlemen, all credit for this virus goes to Donald Trump. And that it is in fact, the Trump vaccine here is Kaylee McEnany in her own words, take a look.

Kayleigh McEnany:         That allows it to, and we want 40 million doses by the end of the year, which is a tremendous achievement, not just to have gotten a vaccine in this time, but to have produced 40 million in advance. It’s having a business man as president, it’s the Trump vaccine. Yes.

Now I’m sure most Americans would actually love to be able to take a Trump vaccine and then we’d never be subjected to him one, uh, ever again, right? That’s how vaccines work like a flu vaccine. We need a Trump vaccine as Kaylee McInerney calls it. But as for the COVID vaccine, um, Trump didn’t do anything. He really didn’t. You know, Republicans are still scratching their heads as to why Obama won a Nobel prize. And yet they’re all willing to give credit to Donald Trump for a vaccine that he literally was not involved in any of the development for like how many tests, how many double-blind studies was Donald Trump running, right? How much data was he looking through and comparing the results? What hypotheses did he put forward as part of his scientific analysis? Kaylee, can you tell us that? Can you tell us what his involvement was?

I mean, some of these companies that actually developed some of their, some of the vaccines, uh, they didn’t even take any money from operation warp speed. And the other ones who did please understand none of them needed it. None of them needed it. We’re talking about corporations that price gouge Americans so badly that they make tens of billions of dollars per year. Yeah. They didn’t need us to shovel a couple more billion to them to be able to develop a vaccine. It wasn’t the money that was holding them back. Trump had nothing to do with us. He wasn’t even going to the meetings where they were talking about these things. He wasn’t involved, but of course, like everything else in his life, if it happens near him, he’s going to try to steal the credit for it. And this would be something he does for the rest of his life, for the rest of his miserable existence on this planet.

Donald Trump is going to work over time to convince the American public that he, in fact, the person who came up with the vaccine, that it is all because of him that once this pandemic is eventually eradicated, it will be because of what he did on the other side, the a more than one quarter million people dead. Hey, that’s not his fault. That’s the governors. That’s the mayors. That’s the cities. That’s those Democrat run cities doing those things. Antifa was probably somehow involved in it. Maybe who knows, but that’s definitely not his fault. Nope, Nope, Nope, Nope, Nope. But the vaccine that he had nothing to do with yep. That’s all him, baby. And that is how the Republican brain works.