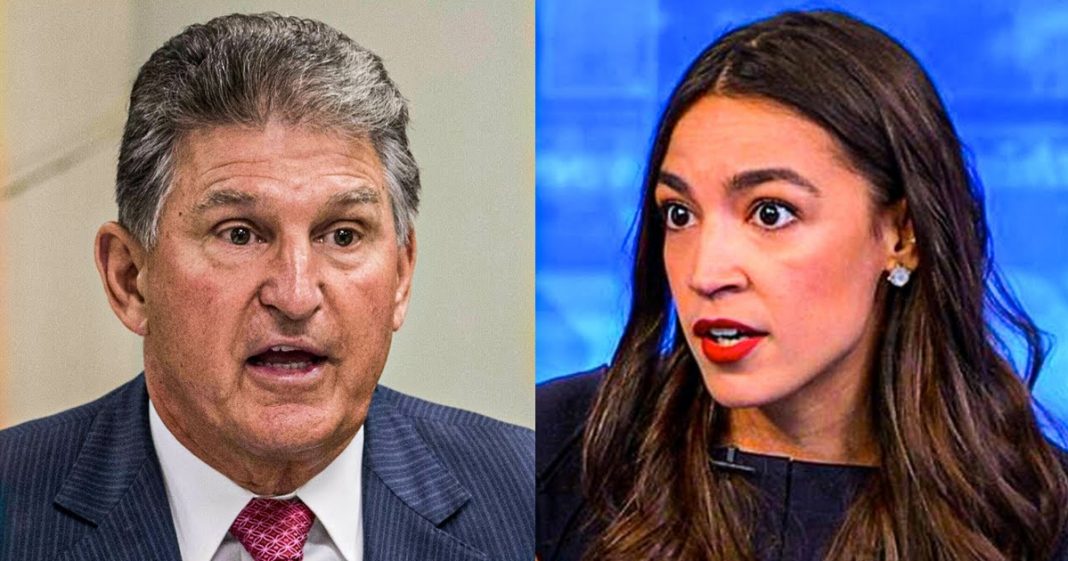 Senator Joe Manchin needs to be kicked out of the Democratic Party for many reasons, and his arrogant and fact-free attacks on Representative Alexandria Ocasio-Cortez this week aren’t helping him. Manchin accused AOC of tweeting more than she legislates, a claim that is easily disputed by her legislative record. In fact, Manchin has actually missed MORE votes than AOC has! Ring of Fire’s Farron Cousins discusses this disgusting attack and doesn’t hold back his own attacks on Manchin.

Earlier this week, democratic Senator Joe mansion, uh, had an interview published in the New York times where, when he was asked about the stair, that representative Alexandria Ocasio Cortez had given him, uh, at a state of the union address, he responded by baseless attacking this young woman that he has admittedly never even met here is what Joe Manchin, the worst Democrat in the United States had to say about AOC. I guess she put the dagger stair on me. I don’t know the young lady. I really don’t. I’ve never met her. I’m understanding. She’s not that active with her bills or in committee. She’s more active on Twitter than anything else. She’s just a lazy piece of . And I’m just a good old boy from West Virginia who does good things. She’s snarky on Twitter. I would never be that way. New York times, you see Joe, you’re so stupid that you don’t understand.

These are things that are actually quantifiable and it’s not like you have to have access to some kind of special piece of information to be able to get this info. No, no, no. This is all public record, bud. So your dumb doesn’t realize that people were quick to point out that you’ve actually missed 1.3% of Senate votes or 1.2%. Excuse me. While AOC has missed 0.3% of house votes. So, so who is the lazier one here? The person who’s missed more votes you or the person who’s missed less time. Her numbers are tough. Aren’t they? Joe. Oh, but if you want to look at other numbers sure. You say she’s lazy and committee she’s more active on Twitter. Okay. Well what has she done in committee? Oh Lord. She has co-sponsored 553 bills and you’ve co-sponsored 423 in the same amount of time. So she’s done 130 more bills than, than you.

Hm. But yeah, I guess, you know, she’s more active on Twitter, right, Joe? Um, this is a baseless attack on AOC. Joe Manchin is a horrible excuse for a human being, a walking piece of excrement. If you will. Um, somebody, I can’t stand that. I honestly lack the words to tell you the, the contempt and hatred that I have for somebody like Joe Manchin, but he is one of the main reasons why I have lost faith in the democratic party because there’s too many Joe mansions and not enough AUCs Ocasio Cortez in the last week by playing video games with other leaders from other countries, by the way, raise $200,000 for food banks here in the United States. What did you do? Joe mansion AOC has put ideas like the green new deal on the map helped to push Joe Biden’s policy. Not quite to the green new deal status, but further than it would have been likely. Otherwise

She Is on the map, Joe. She is the future of the party and your sitting there proudly proclaiming I’m in the city. You know what that means? It means you’re too much of a frigging coward to take a stand either way. You won’t take a side at a time when yeah. You kind of have to take a side. You’d rather just stay in the middle, play both sides and then say, ah, I don’t have to make any hard decisions. I don’t have to do anything that is going to make me uncomfortable. I shouldn’t even be a friggin representative mansion went on in his interview. He said, we’re not going to defend the police. We’re not for the green new deal or the new green deal. He called it. That’s not going to happen. We’re not for Medicare for all. We can’t even pay for Medicare for SOP. Actually we could dumb-ass we could, we, we do already pay for Medicare for some, by the way. Uh, the reason that’s having trouble right now is just cause randomly idiotic Republicans and Democrats like Joe Manchin, just cut the funding for it.

Like that’s why it’s struggling for money. Not because there’s not enough for it, but because people, like you said, no, we’re just not going to give you what you need. That’s not a program that struggling. That’s a program that’s been kneecapped by you all stare at the morons in Washington, DC. We can, by the way, afford Medicare for all we are by the way, for the green new deal. And we need some kind of reform for the police. Maybe you’re not all in on the defund, the police, I think you should be. But you know, either way, vast majority of people in this country do agree that police offices need to be reformed greatly. Even Republicans think that. So Joe you’re to the right of the Republicans on that one, the point is Joe Manchin is a coward. Joe Manchin is a moron and Joe mansion is everything wrong with the democratic party. AOC on the other hand is forward-thinking. She is down to earth. She is talking to average people and treating them as human beings. And she is actually trying to help. Joe Manchin is just trying to keep his position of power without ever having to make a real decision.