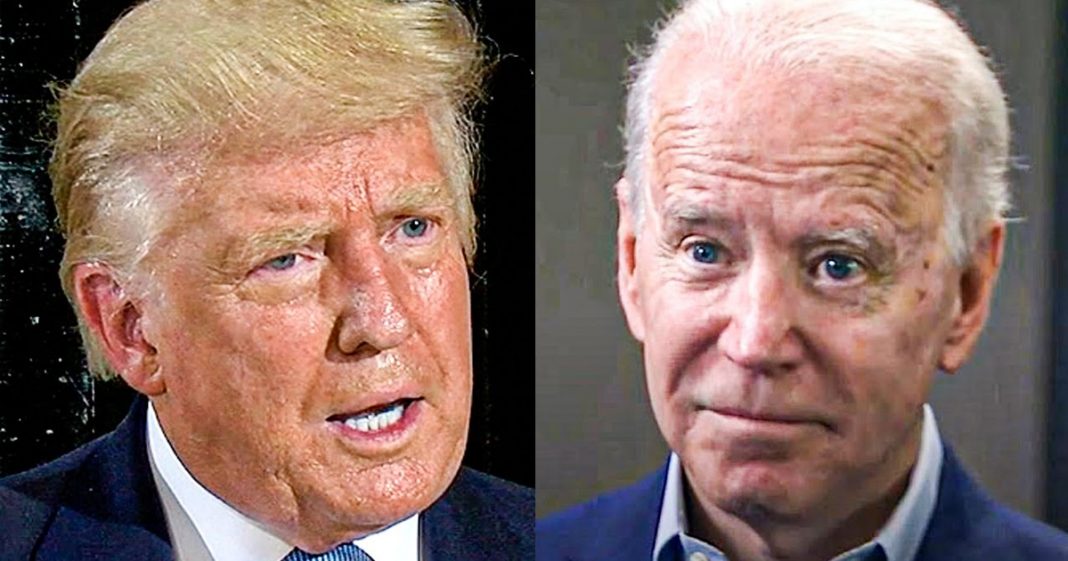 According to the latest round of polling from Gallup, Donald Trump’s favorability continues to fall, losing 3 points since the election. On the other side of the coin, Biden’s numbers are continuing to rise, with more than half of the country reporting a positive approval for the incoming President. The longer Trump stays in the picture, the less popular he becomes with the public. Ring of Fire’s Farron Cousins explains what’s happening.

If the reports are accurate and Donald Trump is hoping to run again for president in 2024, the best thing he could do right now is shut the hell up. According to the latest round of polling from Gallup, Donald Trump’s approval rating has fallen three points since the election. He now stands at a solid 42% favor ability rating here in the United States. And in that same time period, Joe Biden’s approval rating has increased by five points up to 55%. So Joe Biden like every, every other president elect before him with the exception of Donald Trump now has the approval of most people in this country. Again, Trump was the exception to that. Trump was the only person who after they won the electoral college, uh, did not even achieve 50% approval rating. So, Hey, there you go. A little feather in your cap Biden, you reverse the trend that Trump had started for one election.

Nevertheless Trump’s approval rating continues to fall and not just among the public at large with Republicans, his approval rating has now fallen sick points in the last few weeks, six points still stands at 89% approval with the Republican party. So don’t think that, Oh my God, most, no, no, no, no. Most of them still like him, but he’s lost 6%. That is a big drop, especially actually for somebody who thinks they’re going to jump right back into the fray, start holding these rallies and somehow get enough support to run again in 2024, it ain’t going to happen. I mean, I’m going to keep saying that until well, I’m proven wrong, but for right now, Trump can say, he’s going to run hell. He could even create the 20, 24 campaign, the committee and all of that. He can actually run himself, but it is not going to be successful.

Why the public is tired of him. And I know don’t come at me with a boot 73, 74 million still voted for him. Yeah. There’s a lot of weird people in this country. Folks, a lot of them, a lot of dangerous people in this country, but there’s more who aren’t. And as long as we maintain, there are more that aren’t, it’s going to be okay. In terms of keeping Trump out of office, the country itself, not doing and good, probably not going to see a massive overnight turnaround of that with Joe Biden, either we have very serious problems happening. And Joe, Biden’s just appointing the same old, same old, same old people that have always been in DC. So yeah, it’s not going to be great, but if you’re worried about a return to the Trump days, trust me, it’s not happen unless something dire happens between now and 2024, anything’s possible.

You know, if you would’ve said this time last year, Hey, we’re going to have a massive pandemic. That’s going to crash our economy. And every is going to start working from home. Nobody would have believed you, but Hey, things happen. Sure. But as it stands right now, when you look at the data, when you look at the available evidence, Trump doesn’t have a snowball’s chance in hell of winning the public back. He never had the public on his side, by the way, the only poll that ever showed him with like a solid 50% approval rating was the right wing Rasmussen that has been, uh, repeatedly shown to not be accurate. And it held so while some of the polls in 2020 were not, uh, did not hold up to the voting overall, the public rejected Trump, and they’re going to continue rejecting him as long as he can’t keep his mouth shut. He is doing this to himself. And if we’ve learned one thing over the last four years, it’s that Donald Trump will not shut up until he is physically unable to speak. That is the biggest, good thing the Democrats have going for them right now.