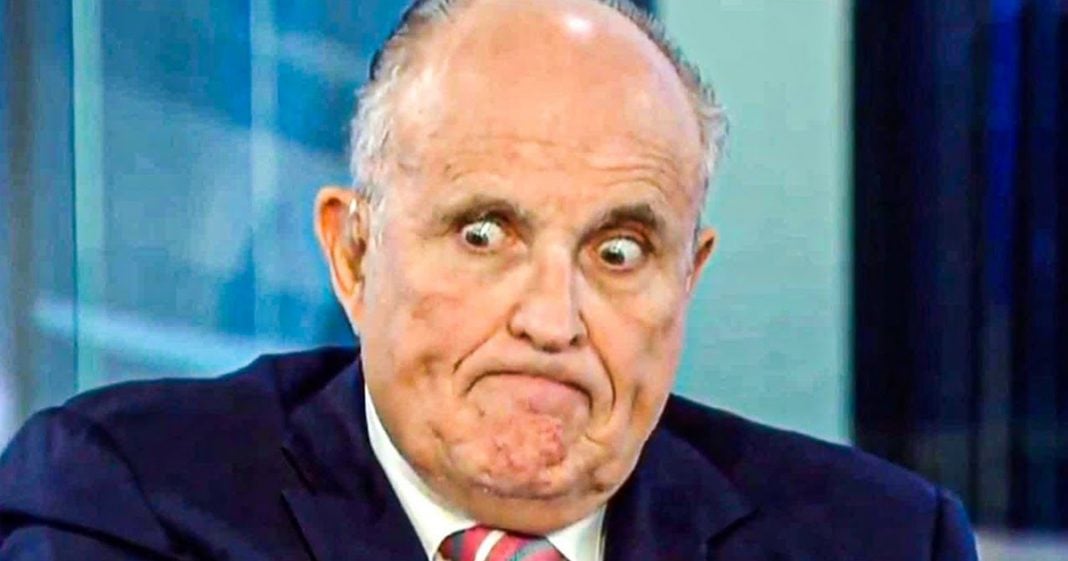 It’s the same old story that keeps popping up all over the place: Rudy Giuliani and his team of crackpots are asked to provide evidence of the “widespread” voter fraud that they swear took place, and they continue to fail to deliver. Except this isn’t the media asking for it this time, it was Trump’s campaign lawyers who wanted to see it, but Giuliani couldn’t produce anything. Ring of Fire’s Farron Cousins explains the very obvious reason why that happened.

According to that explosive Washington post report that came out this past Saturday evening, Trump’s own lawyers and by Trump’s own lawyers, I mean the campaign lawyers, not Rudy Giuliani and Sidney Powell who are now running things, even though Powell may or may not, who knows what she’s doing, who she’s with or whatever his lawyers had asked Giuliani and Powell who Giuliani had later said, Oh, she’s never working for us. Uh, they asked them for all of this explosive evidence that they swore they had, you know, Hey, we’re, we’re his lawyers too. We’re working for him. We would love for him to win. Uh, let us have this evidence that you have of this widespread voter fraud so we can help. And like every other group that has asked to see this evidence, Giuliani was unable to provide it to them. And I think we all know why because it doesn’t exist.

But here’s the thing. Tucker Carlson, uh, last week had admitted that they asked Sidney Powell, uh, and Kaylee McEnany, uh, I think actually, you know, it was just Kayleigh. McEnany sorry. Uh, they had asked Makena and he said, Hey, you know, you’re saying all this evidence exists. You held up a binder that you swear wasn’t full of blank pages. Can you, can you share it with us? Where are your friends? Where are your allies? We have the biggest microphone in cable news. If you’ve got it, let us expose it and show how corrupt the Democrats are. And McEnany responded with, please stop contacting me. Sure.

Rush Limbaugh. Also last week finally turned it against Trump and said, listen, y’all keep saying you have this evidence than every time we ask you for it. You say you can’t have it. Or you tell us to stop reaching out to you. Clearly. You don’t have it. And all of that, obviously, okay. Members of the media, maybe you don’t want to show them what’s in your lawsuits. I understand that there are actually rules about what you can and cannot, depending on, you know, any orders that say you cannot share information, you cannot share documents, whatever it is with the press, but you can [inaudible] with other lawyers working on the same case. So there would have been no reason whatsoever for Julia, Johnny, and Powell, to not share this quote, explosive evidence with Trump’s other lawyers and the less it didn’t exist. Folks. I don’t know how many more days in a row we are.

We’re going to have to have the exact same conversation, but I feel like a parrot repeating the same phrase that knows over and over and over, because that’s where we’re at. But as long as they keep going out there and making these claims, Trump was making them on Twitter all day, Monday, and this morning. So we will have to continue to go out there and fight back against this nonsense. And that is exactly what it is. This is nonsense. And Trump knows it. He wouldn’t be talking about a 20, 24 presidential bid. If he thought he had won the 2020 election, it is over. But again, if they keep saying it, we’ll keep debunking it. And hopefully we’ll all maintain our sanity along the way. There is nothing Trump can Do to win this election.Trust me. Okay. It is over. He’s going to continue to fight it. It’s going to continue to get thrown out of court. And even if the few cases that he has left are successful, it’s not even enough To overturn the results it is over. And everybody knows it. We all just have to accept it. That’s the second part. We all know it. Let’s just accept it so we can move on.