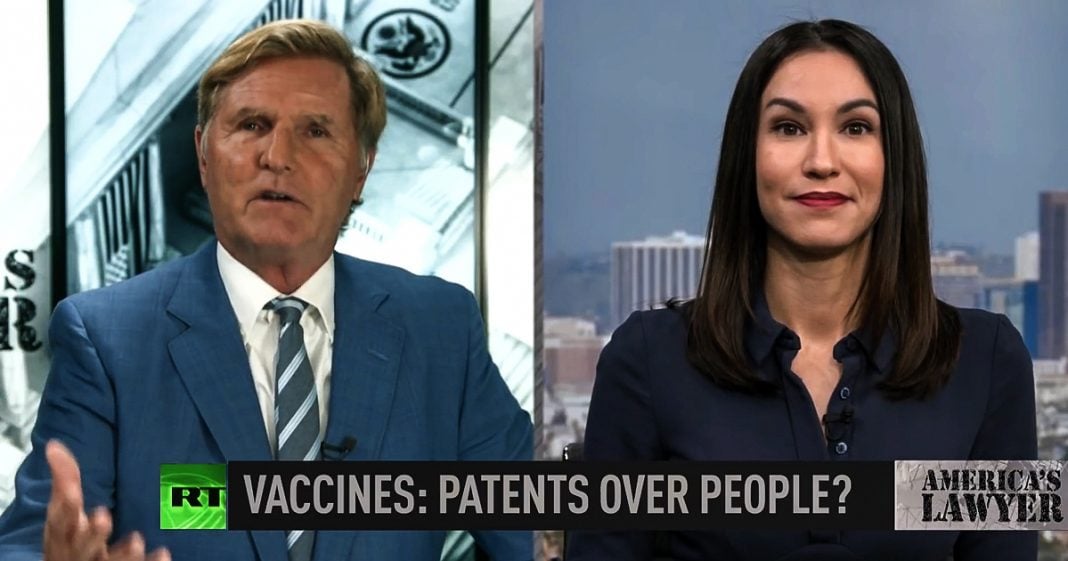 Via America’s Lawyer: RT Correspondent Brigida Santos joins Mike Papantonio to discuss how after news broke of an effective COVID vaccine developed by Pfizer, Moderna’s just announced its own vaccine which has performed well in clinical trials. But while much of their research was funded by taxpayers, why should Americans pay hundreds of dollars to be administered the final product? And could we see a global patent war between pharmaceutical companies?

Mike Papantonio:             Moderna is the second biotech company to unveil effective vaccine for the COVID-19. The company has received at least $1 billion in federal funds to develop that treatment. But intellectual property rights could prevent replica vaccines from being rolled out into the masses as this pandemic rages on. I’ve got Brigida Santos with me to talk about this. First of all, Brigida, we’ve seen this story again and again, taxpayers pay for everything. Universities pay for everything. US government pays for everything for a private corporation and then the private corporation makes all the money. How effective to begin with, how effective is the new vaccine by, by Moderna?

Brigida Santos:                   Sure. Clinical trials of Moderna’s COVID-19 vaccine have been successful. The vaccine is reportedly 94.5% effective. Now, part of the reason why it works so well, even though it was developed at a record speed, is because it uses new messenger RNA technology, just like the Pfizer SARS-CoV-2 vaccine, which is also 95% effective. Until now, no commercial vaccine has ever used MRNAs. So these vaccines are groundbreaking and will change the medical industry.

Mike Papantonio:            So the RNA memory is that we, we, the, the, the vaccine actually knows where to go to, to create a molecule that prevents from the vaccine, that prevents COVID-19, for example, of attaching to blood cells and moving through the body. Is that kind of what we’re talking about when we talk about RNA?

Brigida Santos:                   Yeah. MRNA medicines instruct the body to make antibodies that fight diseases. Now, in this case, the vaccine injects genetic instructions into the body that tell it how to make a fragment of the critical viral protein, which is known as the spike protein that mimics with SARS-CoV-2 does in nature. The body is then basically tricked into thinking that it has the virus and in response, it launches antibodies. Basically the body is creating its own vaccine. Now, this is the opposite of how traditional vaccines work. Traditional vaccines inject fragments of the actual viral protein into the body, rather than instructions on how to make that spike protein. This means that MRNA vaccines can’t actually give people the virus. And because these new vaccines don’t require actual viral proteins, they’re a lot faster to develop than traditional vaccines, which can take years. So this technology is absolutely game changing.

Mike Papantonio:             Yeah. And let me point out the MRNA technology was actually in part created by the government. Taxpayers helped create that, it was going to be used for other purposes. So that’s then given to Moderna, Moderna takes it, they modify it. Then they end up making hundreds of billions of dollars as they give this vaccine out as they want to give it out. As they charge whatever they want to charge. And as taxpayers end up paying for that, but get nothing paid back. Is the technology going to be available for other companies to create replica vaccines since the US government and taxpayers have provided all of this groundwork, can we allow other companies to compete?

Brigida Santos:                   Look, Moderna has already patented it’s MRNA 1273 vaccine candidate, which means the company owns the global rights to develop and commercialize this specific new technology. Similarly Pfizer and its German partner BioNTech are also trying to patent their MRNA vaccine candidate. They were the first to actually announce an effective SARS-CoV-2 vaccine, but since they sub licensed their MRNA platform from another company, there’s now an intellectual property dispute over that treatment. Unfortunately, intellectual property fights could lead to vaccine shortages and prolong the pandemic. These companies are not going to be able to quickly manufacture and distribute enough doses to flatten the curve on their own. If licensing their technology, which taxpayers helped fund is too expensive, other companies won’t be able to create those replica vaccines to get them out faster.

Mike Papantonio:             So the, the, the solution is for all the companies to cooperate, first of all, they may not make as much profit, but they’re going to stop the pandemic with the very technology that they were given by taxpayers and the US government, the very technology that devout, developed in universities. They didn’t do this in their laboratories. They did some of it in their laboratories. So the, the, we see this time and time again, where it comes to life or death issues with things like vaccine. How much federal funding did Moderna actually receive to develop this vaccine?

Brigida Santos:                   Moderna has taken $1 billion from American taxpayers to help develop the technology used in its SARS-CoV-2 vaccine. And in fact, it did not have that technology without that government funding. They tried to get there and they couldn’t, that money helped them get over the hump to get that MRNA result. While the US government also owns one patent for this technology, it’s likely not going to exploit the patent for financial gain, like Moderna plans to do. It’s actually expecting to generate billions of dollars in profit as the sole corporate owner of this technology. Taxpayers helped fund Moderna’s vaccine, but we’re not considered shareholders. So we’re not going to receive any kind of dividend from the company’s profits. At best the centers for disease control and prevention report that vaccine doses that were purchased with US taxpayer dollars will be given to citizens at no additional cost. Now we’ll have to see if that happens. Pfizer, on the other hand, did not accept federal funding to develop it’s vaccine, Americans may have to pay for those, unless the US government pays Pfizer to then deliver the vaccines, which is something that they were looking into. I’m not sure where it’s going to go from here, but that is a possibility.

Mike Papantonio:             Yeah. We, we have to pay Pfizer to help humans live. I mean, that’s, that’s the kind of the shorthand of all that. But the truth is Pfizer will charge the US, the US patient 10 times, 20 times, 30 times what they charge in another country because the other country won’t allow them to do it. Look, thank you for joining me. Okay.